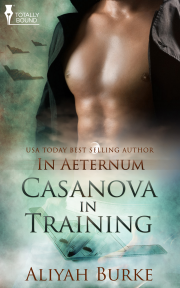 Book 1 in the In Aeternum series

Book one in the In Aeternum Series

A woman who is all about rules and a man who lives to break them, their scorching passion threatens all they hold dear. Can they find a way to have it all?

Lieutenant Commander Giovanni 'Casanova' Cassano is a top test pilot for the military, and is the epitome of an ace. Cocky, arrogant, handsome, and true to his call sign. His best friend's death brings a new pilot to his squadron—a woman. That's not even the real reason it's hard—she's the one who left an indelible imprint on his soul after a twenty-four hour rendezvous. Now she seems to have ice in her veins, not the fiery passion he knows rages beneath the surface.

Jaydee 'Dusti' Amos is following orders, and this time they have landed her at a test facility. She's there to ascertain what caused the deadly B-2 crash. The situation becomes harder once she discovers who is stationed there—the one man she never believed she'd see again after their impulsive and passionate encounter. He pulls her focus from the job at hand and tends to make her break the stringent rules she lives her life by.

They work together to unveil the truth and the feelings between them deepen. But there is a traitor in their midst. Will the fallout tear them apart, or will Gio find some way to convince Jaydee to give him a chance at forever?

Reader Advisory: This book is part of a series but can be read as a stand alone and in any order.

Rain ran in rivulets from both his black coat and the brim of his cover. Lieutenant Commander Giovanni Cassano barely moved, even with the loud and angry retorts of gunfire. The noise sounded ominous. Three sets of shots fired by the seven impassive men. He flexed one hand into a fist before relaxing and allowing the smooth glove to straighten.

Through the dreariness, the beginning notes of Taps started to play, weaving in and out of the raindrops with haunting precision. His right hand snapped up in a sharp salute as his shoulders automatically squared even more.

With a deep breath, he fixated on the casket and the two stoic men who had the honour and privilege of folding the flag. Their movements precise and perfected. Each of the thirteen folds corresponded to an important meaning and allowed him to see the wet gloves the men wore. White cotton to his black leather.

First fold was representative of life. He swallowed hard and blinked. Two, three and four took place. The fifth fold, a tribute to the country. Tears burned the corners of his eyes. Six, seven, eight and nine. The tenth fold was a tribute to fathers, for they, too, had given both sons and daughters for the protection of the country since they were first born.

Stiffening his spine, Giovanni clenched his jaw as he watched the remaining three folds to complete the thirteen, so the flag looked like a cocked hat. A reminder of the soldiers who served under George Washington, the sailors and marines who served under Captain John Paul Jones, and all those men and women who followed them in the United States Armed Forces, preserving the rights, privileges and freedoms enjoyed today. As the two men finished folding, the final poignant note faded from the air. And the salutes ended.

He stood ramrod straight. Only his gaze moved as he tracked the presenter who paused before the slender auburn-haired woman clad in black. Michelle Walker. She sat there under a canopy beside her father to accept the flag.

None of the military members there seemed affected by the steady downpour.

"On behalf of a grateful nation," the presenter said, offering the folded flag.

Giovanni saw Michelle hesitate. The man with the flag waited, unmoving, until she finally took it. His hand rose into a salute and, when she gave him a nod, he completed it. The rain increased but Giovanni watched Michelle hold the flag to her chest.

Over the pounding of the rain came the unmistakable sound of fighter jets. He lifted his gaze to see the four planes scream overhead, his heart clenched with a mixture of pain and regrets that he wasn’t even close to being ready to face. A lone jet peeled off and his heart did that same thing again. It should have been him up in the one that honoured the fallen man. But no... He had yet to be cleared for flight status.

He ground his jaw and ignored the threatening tears. One by one people filed away, the rain not allowing the mourners any respite. Finally it was him and the two family members. His legs wouldn’t cooperate and he had to force them to move him closer.

Stopping at the middle of the closed casket, he took a deep breath, and snapped a salute. "Goodbye, my friend," he murmured before lowering his hand and walking off.

Anger ate at his gut. It was never easy to lose a member of the military. However, when it was a fellow pilot and best friend, it became that much harder.

"Giovanni?" a rattled yet distinctly feminine voice reached him. And halted him.

He swallowed before pivoting around to face her. Damn it! For a brief second he was seeing him again. Alive and well. Michael Walker. Sidewinder. Best friend.

She moved closer, the folded flag still clasped tightly to her chest. It hurt looking at her. Mike’s twin. A softer, feminine version of Michael, but he was still there in her delicate features.

"Michelle." He hated how gravelled his voice sounded.

Green eyes watched him steadily. "You were going to leave without a word?"

He put his gaze on their...her father. Martin Walker showed his age. He seemed so tired and worn out. However, in his eyes, there was anger. The siblings had taken after their mother. Giovanni had always teased Mike about being so pretty. Now his body had been so badly burnt and mangled it had had to be a closed—casket ceremony.

"No," he managed to say as he glanced from father to daughter. "I was going to wait by the car. Allow you final moments."

Martin shook his hand briefly then nudged Michelle. She lifted one gloved hand to wipe the tears from her eyes. "Take this." She held the flag out to him.

His heart seized as he glanced at the flag. Stars uppermost to remind us of our nation’s motto.

Her smile was shaky at best. "Mike would want you to have it."

Giovanni glanced to Martin, ready to plead his case, only to pause. The look Martin bore told him the flag wouldn’t be going back with them. Martin was in a rage from having just buried his only son. He focused on Michelle and saw the opposite. She loathed to give it up and was only doing so for her father.

Almost as if he hovered outside his body, he saw himself reaching for the flag. Michelle relinquished it to him but didn’t step back. Instead, she lifted his hand, pressed the flag against his chest, and hugged him.

"Keep him safe," she whispered in his ear.

More of those damn tears threatened. "When you’re ready to take it..." He trailed off.

She flinched at the tone but squeezed him one more time. A quick peck on the lips and she was gone. They were gone. Moreover, he stood in the raining cemetery, holding the flag given for the loss of his best friend’s life. The thunder rolled, ominous, and the rain picked up even more.

He needed a drink. Badly. And, after he returned to his hotel room and changed from his uniform, he set off to do just that.

The bar was crowded and noisy. Just what he wanted—a place to become invisible. He claimed a corner booth and sat there, bottle of Jack on the table beside him. He poured a drink for his fallen friend and drank it.

"Here’s to you, Sidewinder."

Then he did his best to forget the pain inside him. He knew what Mike would have said. "Find a woman and enjoy life. Don’t cry for me."

Easier to think than to do. With dispassionate eyes, he watched the activity around him. Many women sauntered up to him, only to leave again when he ignored them.

He poured another drink, craving the blur it made of his memory. He paused with his glass halfway to his lips. An unfamiliar tingle skated along the back of his neck. Glancing around the establishment, he found himself focusing on a woman he didn’t recognise or recall entering. She sat with another but he couldn’t look away from her.

This story had it all: strong male and female leads, intrigue, romance, hot sex and great supporting characters. From the moment this reader turned to the first page I was hooked and did not stop until...

Share what you thought about Casanova in Training PRINT and earn reward points.