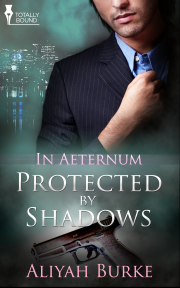 Book 3 in the In Aeternum series

She’s everything he wants and all he knows he shouldn’t have…when danger strikes will he give it all up or is he doomed to live the rest of his life without her?

Valentino Cassano is a man who lives in shadows, lies and secrets. He works for a group that he can’t tell anyone about. When the ugliness from that world affects the woman he’s had a thing with for a few years, he refuses to let her face it alone.

Lexy Camden loves her life as a veterinarian. However when everything gets turned upside down and Valentino inserts himself into routine for more than a few days things get complicated…fast. The feelings she’d been ignoring for so long won’t give her a moment’s peace.

As the danger to her escalates, and part of Valentino’s past comes out, will they have a chance to be a real couple or will it all be shattered with the simple pull of a trigger? Valentino has lost a lot and has no plans to do so again, now if he can just convince Lexy to give him another shot.

Reader Advisory: this book includes scenes of violence and torture as well as references to rape.

Somewhere deep in the Alps

Valentino Cassano downshifted and allowed the car, a smoky black Ferrari, to drift around the tight corner before shifting again. The beautiful scenery whizzing by meant nothing to him. He focused on the same thing he always focused on when not working. Hell, even times when he did work.

She had taken front and centre stage in his thoughts ever since the first day he’d met her. A spitfire. A Southern spitfire.

Nothing mattered. Not the fact he had killed a man less than ten minutes ago. Nor that men would most likely be trying to find him to make him pay. He could care less. Came with the job.

Ahead, a few cyclists had him easing off the accelerator. They dropped back and made it easier to pass. He waited until they manoeuvred the next corner before gunning it and flying around the small group.

Valentino slowed down and followed the speed limit as police cars approached in the other lane. They raced up the road, lights flashing and sirens wailing. He surreptitiously checked his rear view as he trailed behind an old split-rail truck hauling livestock. Chicken feathers blew by like falling snow. Unfortunately, the smell wasn’t equivalent.

Whipping around the truck, he continued on his way to the quaint village nestled in the Swiss Alps. While not as busy in the summer as it was come winter, there was still hustle and bustle…enough for a tourist to just be another tourist and not stand out.

Parked at his hotel, he unfolded his body from behind the wheel, tugged on his suit jacket and headed in after closing the door. He gave a sharp nod to the female concierge as he strode through the tiled lobby. A blush skated up her cheeks, yet he never slowed. She held no interest for him, despite her numerous and blatant advances during the course of his stay.

Today he was checking out and heading to Eiger. He’d always wanted to see the north face in person. Now seemed the opportune time. Pushing into his room, he briefly paused and took a habitual cursory glance about. Nothing appeared out of place, but some practices had become ingrained over the years. At the closet, he withdrew his suitcase and began packing. As he closed the lid, his thoughts returned to Lexy.

The steam rolled around them as the hot water cascaded down from multiple showerheads. Her back to the tiled wall while he thrust in and out of her slick pussy. Hard. Fast. Deep.

She had her legs wrapped tightly about his hips and she undulated against him, taking his cock in deeper. Her fingers tangled in his hair and he buried his face along the graceful curve of her neck.

He kept one hand splayed on the wall and one gripping her ass. Her moans were throaty and each one made him harder. He couldn’t get enough. Therein lay the problem, it would never be enough.

Her hair was plastered to her head and her skin was flushed from the combination of heat and passion.

“Oh, God,” she groaned, flexing her internal muscles around his cock.

His reply was just as guttural—it flowed up from deep in his chest, as he continued to drive into her. She pulled his hair, raking her nails along his skin causing stings of pain. It urged him on. Harder. Faster. Deeper.

His release barrelled down upon him.

“More!” she cried, her back bowing. He tried to hold off a little longer. It wasn’t going to work. Fire flowed through him, edging along his need to conquer and possess this woman. Her vaginal walls flexed again and his roar raced free to mix with her cry of pleasure as they crested together.

The phone rang, shattering his memory like a bullet to glass. Wiping his face with one hand, he blew out a frustrated breath. Lust rocketed through him. His cock strained against his slacks, wanting out. Craving release. Even his palms were sweaty as he reached for the phone.

“A message for you, sir, at the front desk. Would you like it brought to your room?”

“No, thank you. I’ll pick it up.” He replaced the receiver, stared out of the window then headed for the door, bags in hand.

“Your message, sir.” The man slid it to him as he signed his bill.

“Thank you. Have them bring up my car.” He walked to a chair then sat, bags at his feet. No one was behind him and he opened the envelope before pulling out the single sheet of paper.

That was the only word. He stifled a yawn and put the paper inside his suit coat pocket. He wasn’t going. Not this time. Somehow, he would find a way to stay away.

“Your car is ready, sir. May I take your luggage?”

“Of course.” He pushed to his feet and left. Soon he was driving away. Utilising the hands-free feature of his phone, he said a name and waited for the call to connect.

“Yes?” The male voice was deep and gruff.

He shifted gears and the car responded perfectly, leaping forward with more power and speed. “No.”

Tossing the phone down, Valentino tried to let the beauty of his surroundings sink in, but it seemed a fruitless endeavour. Not even when, much later, he sat at a bar staring out at the north face of Eiger did the majesty register.

“Finally made it to the Eiger, I see.”

At the deep Southern drawl, Valentino glanced up to spy Beau standing there. Beauregard Lee Jackson, to be precise. A drink in his hand, the man flashed a grin before sitting down beside him.

“Hello, Beau.” He sipped his vodka and sighed.

Familiar words. His brothers were always on him about the fact he wore suits so often. “Nothing wrong with wearing one.”

Slicing his gaze to the left, he took in Beau’s grey and green flannel shirt, jeans and cowboy boots. When one first met him, they tended to think hillbilly, faced with his dress and slow Southern drawl. It gave Beau the advantage—Valentino knew this man was one of the most deadly he’d ever met. Beau knew at least fifty ways to kill a person with his hands alone, and he could get very inventive with ways to hurt a person. Valentino had seen Beau in action and it wasn’t a pretty sight. However, he wasn’t scared.

Share what you thought about Protected by Shadows PRINT and earn reward points.