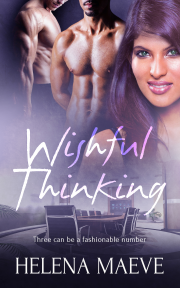 Three can be a fashionable number.

Waking up in bed with two men is not how model-turned-agent Jiya planned on mending her broken heart. One wild party and a pair of handsome strangers, and her previously entrenched principles seem thrown off-kilter. To make matters worse, one half of her extremely ill-considered one-night stand turns out to be none other than the very photographer she signed up months ago—with her ex-boyfriend’s help.

Stefon is both attractive and extremely good at what he does, an irresistible combination. Dating him should be enough—is enough—but Jiya’s quest to recover her missing phone soon has her revisiting both the scene of the party where they first met and its enigmatic but solitary host, Elijah.

Torn between two men, Jiya soon finds herself hurtling toward an impossible choice and a revelation that could change everything.

As the dream faded, Jiya rolled into a languid stretch under Egyptian cotton sheets and opened her eyes. The elegant frame of a four-poster bed registered first. Gauzy curtains danced in the morning breeze and the sound of rain gently drumming on the wooden floorboards reminded her they’d never closed the windows last night.

Jiya shivered as vivid recollections dispelled the last glimmers of indolence. Her nudity registered next, then the two men asleep on either side of her.

Jiya stopped breathing. If she moved, she might wake them. If she didn’t, they might wake on their own. Either way, there would be questions, awkward conversation, maybe even the promise to call—which they wouldn’t.

Quiet as a mouse, Jiya slid her feet out from beneath the sheet and sat up. Her heart thundered. Curiously, she was still wearing one of her stockings. Less curiously, she was otherwise stark naked.

Heat ignited in her cheeks. Stupid, stupid, stupid. Jiya tucked her long black hair over one shoulder to keep it out of the way, and quietly made her way to the foot of the bed. Her clothes lay scattered all around the bed, tangled with black slacks and socks and a pair of briefs that categorically weren’t hers.

There was no sign of movement from either of her partners as she snatched up her things and tugged them on. She found her other stocking by the open window, stepping into a shaft of sunlight to retrieve it.

A flash of memory intruded—hands on her skin, warm breath on her cheek—only to dissolve in a rush of urgency.

Her miniskirt was in decent shape but her shirt sported a wine stain the size of a dinner plate. Though she had worn far more revealing things in front of hundreds of people—and been photographed virtually nude and had her appearance scrutinized by countless employers—buttoning her jacket over her bra made Jiya feel cheap.

Needs must. She’d change at the office.

Temptation nudged her to indulge in one last look around the room, but she resisted. There was no time. It would serve no purpose.

She grabbed her pumps and her purse, checked that the stud in her nose was still in place and tested the door. In digs this ritzy, the hinges didn’t dare squeak.

Breath knifed in and out of Jiya’s lungs as she negotiated the marble steps barefooted. Empty glasses and discarded bottles were everywhere. A pair of lacy underwear dangled from a light fixture, a tie from a doorknob. Glittering glass beads had turned the foot of the stairs into a downright safety hazard.

A soft murmur of unfamiliar voices crept up from the ground floor. Judging by the gurgle coming from the kitchen at the back of the house, someone had figured out how to run the coffee machine.

Jiya slid her ankle boots on, wincing as they pinched already sore toes, and smoothed a hand through her tangled hair. The front door was within reach. She was almost home free.

The jangle of car keys stopped Jiya in her tracks.

Fuck. She turned, slowly, to face the music and found her best friend grinning from ear to ear.

“Lucky I’m about ready to head off myself. Thought I’d have to drag you out of bed.” Short-cropped blonde curls sticking out every which way, Georgia sidled close and hooked her arm around Jiya’s. She typically smelled like expensive perfume but the previous night’s revels were still seeping through her pores. “So? How was it?”

Unsteady on her feet, Georgia submitted to being towed out of the house. “You’re telling me you don’t remember any of it? You didn’t even have that much to drink!” At the car, she stopped, took Jiya by the chin and narrowed her eyes “Did they give you something? I know there were all kinds of pills going around last night, but you said—”

“I didn’t do drugs. For fuck’s sake.” An autumnal gust swept the driveway as Jiya snatched the car keys from Georgia’s long-fingered hand. Goosebumps bloomed on her bare legs and she shivered in her miniskirt and no-shirt ensemble. In dressing up for the party, she hadn’t thought to dress for the weather.

“You had sex with a billionaire. A particularly eligible bachelor.”

“What happened to the other guy?” Georgia went on, unruffled. “Did you kick him out?” She stuck both hands under her chin. “Did you invite him along for the ride? Oh my god, you did!”

“Keep your voice down.” The master bedroom had a view over the front yard and Jiya had left the French windows open.

“Your first three-way and all you have to say for yourself is ‘keep your voice down’?”

Ignoring dull aches and the swooping sensation in the pit of her stomach, Jiya slid into the driver’s seat. The Mercedes purred like a cat when she turned the key in the ignition.

Visibly dejected, Georgia clambered into the passenger seat. “Why are you being such a buzzkill? Was it bad sex or something? Did they—?”

“No.” Hearing ugly conjecture take root in Georgia’s tone was worse than weathering her boundless enthusiasm. Jiya put the Mercedes into gear. “It wasn’t bad.” If memory served, it had been anything but. “It was just—a stupid mistake.” Not her first and most definitely not her last.

Jiya leaned hard on the accelerator and cut her off by swerving boldly through the mansion gate. The Mercedes rattled, undercarriage hitting the curb, but the car didn’t let her down and Georgia, at long last catching on, stopped pestering.

The chemistry [...] is clearly present and we get to wonder about just what might happen next... sometimes that question is very effective at keeping characters in one's mind long past finishing the l...

Share what you thought about Wishful Thinking and earn reward points.