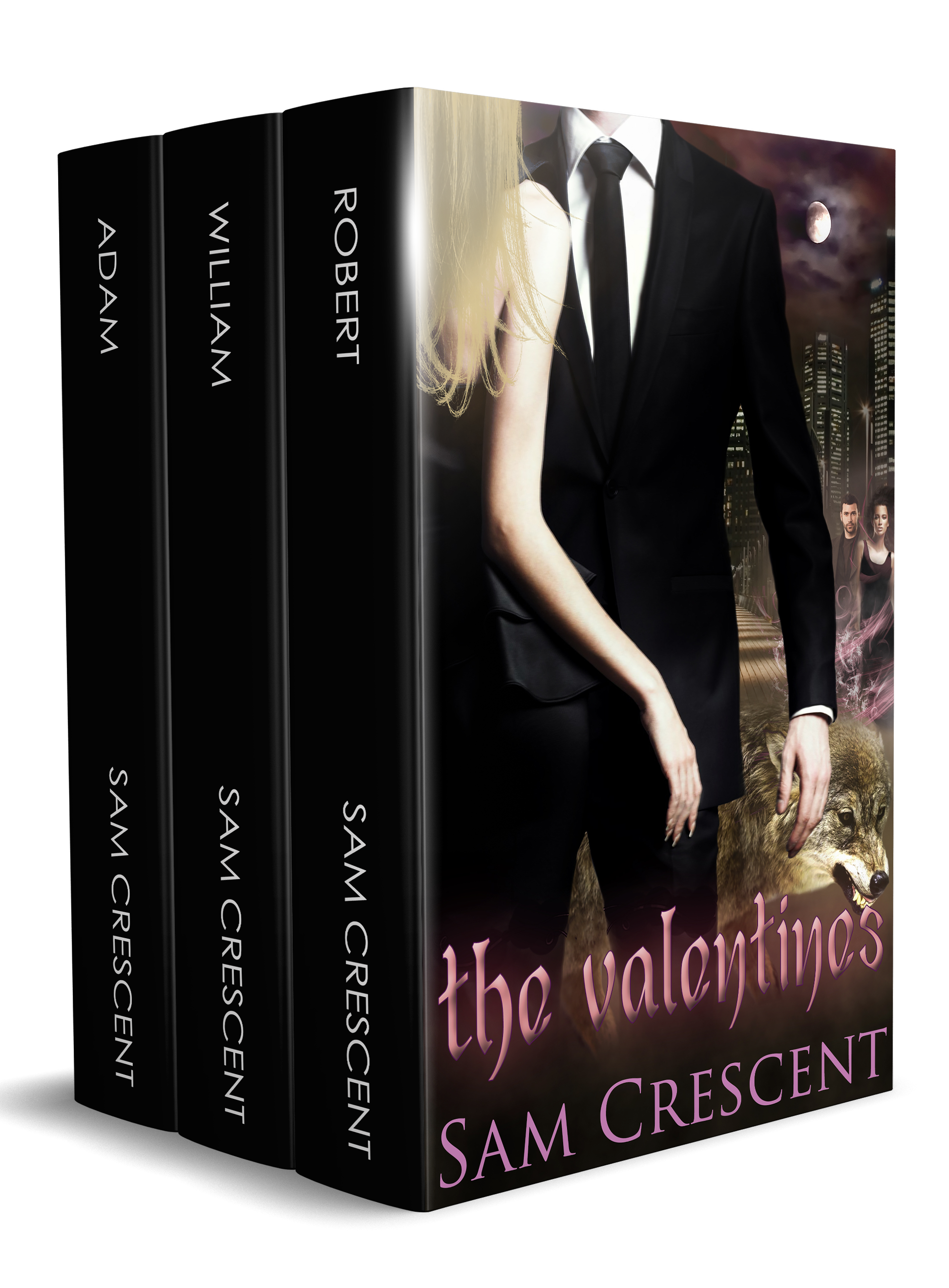 The Valentines: A Box Set

A war is about to begin.

Sophie Ford has a secret. Fear for herself and her friend has her running to the vampire council in search of protection.

And she is bonded to a vampire.

Robert Valentine knows Sophie is hiding something, but what? She tempts him as no little human ever has in his whole life. He is the eldest son of the most powerful family in the world.

Forces they cannot control are fighting against them. Time is running out. Sophie's secret is about to be exposed. Is there time to save the ones they love? Can Robert and Sophie move on and survive the war that is about to begin?

Time is running out.

He promised to keep her safe, he promised to protect her. William Valentine failed. On the night his father was murdered, the same wolf took Katie from him. The one and only surviving witch…or is she?

Katie White is going to die. She can feel it. Her determination and thoughts of William are what is making her fight to stay alive. But time is running out.

An old foe from William's past is determined to see Katie finished.

Will William make it in time?

The Valentines-the war has only just begun.

To figure out the present, they need to go back to the past.

Poppy is the only remaining necromancer in the world. She is the one in control of the dead and she has been sent to the Valentines. There is an evil force at work and she must help Adam Valentine to uncover it before it's too late.

Adam is intrigued by the young necromancer. Her scars do not affect him. He sees the strength inside her and he likes it. All he wants to do is protect her and claim her as his own.

They are on a mission to find out who the real alpha of the Beyer West pack is. But Poppy's world is about to turn on itself as she needs to make a choice. There is no room for love in the life of a necromancer, yet after centuries of being alone, Adam has filled her life with meaning.

People will die and secrets will be revealed as the balance that protects them is broken. Can their love survive as the world is about to be sent into chaos? This is no longer about the wolves but something much bigger that neither of them can fight.

Reader Advisory: These books contain scenes of kidnap and violence.

The Council of Vampires, somewhere in Beyer West.

“You will allow this match to go through.”

Valentine glanced over at his father—head of the Valentine Corporation and leader of his family—feeling bewildered and angry.

“It is just another human family on the verge—”

“I don’t care,” his father yelled at him across the room.

watched his mother flinch. His three brothers turned away, not wanting their father’s wrath directed at them. understood. These were perilous times and his father had no room in his life for arguments. His two sisters were not even allowed access to the Council’s chambers. Instead, old traditions said they must remain outside at all times. One day, wished to banish the old ways and start afresh. Rose and Dawn were equally affected by what happened in this place as he was.

looked at his father. He respected him but there were times when he despised the way in which the man worked. The laws that governed their society were archaic. If they didn’t change their ways soon, believed it would get them all killed.

“What have they offered?” asked, trying to take some interest in the situation, since it was likely to affect his future. At the moment he had no power to change the outcome of tonight’s events.

His father nodded to the guards to open the connecting door leading out to the human visiting room. This allowed humans a place to sit and wait, and offered protection against the abuses of the outside world. Vampire protection, among the humans, was considered a last resort, and only the most degraded and those without pride accepted such an alliance.

A man and a woman entered the great hall. There was nothing fantastic about their appearance. They were dressed in business suits, neat and tidy, and he noted that they appeared to be in their late fifties. One of them carried a folder, which was odd. He assumed the folder contained information, but the Council usually had all the information it needed about human visitors petitioning for help. Beyer West might be a small town, but it was a Valentine-run town. His father was pedantic in his dealings with the human public. Every deal and alliance must be well-documented and sealed away for future reference.

“Mr and Mrs Ford, allow me to introduce my oldest son, Valentine.”

acknowledged the couple, bowing, as was the protocol among his family. He kept his attention on the Council and his own family, though. He knew of the Fords from his own company dealings. They were a prosperous family who should have no need of the Valentines’ services. Only last week had checked the profit margins for the town’s most affluent families. It all seemed rather odd to him.

The couple glanced nervously around them.

“We need the kind of protection you are notorious for offering,” Mrs Ford said.

noticed that Mr Ford was scratching his head and felt like doing the same. How could this company need their help? Last time he checked, Mrs Ford stayed at home with the children while her husband ran the company. couldn’t think of a single reason why they would be at the Council.

“We are not a security company, Mrs Ford.”

“I’m aware of that, but we can meet the price that you have set.” She handed over the file. “We’ve stumbled into some financial difficulty and we would also like assistance with this.”

Valentine opened the folder. An A4 picture of a beautiful young woman stared up at him, an innocent and carefree smile shining from deep within her.

“Pretty girl,” he complimented her.

“That is Sophie. My only daughter and not a girl but a woman of twenty-one,” Mr Ford corrected him.

“With all due respect, Mr Ford, I’m more than five hundred years old. To me, she is a child,” snapped, looking up to glare at the couple.

He couldn’t deny the intrigue he felt about the girl, just from the picture he’d seen, but she was still a child. Her picture and family situation should not concern him or his family. Why did he suddenly have a bad vibe about the whole meeting? glanced back at the file. The innocence clearly expressed in her beautiful features said that this girl hadn’t yet been tainted by the real world. He felt a tug at his heart, knowing that within months the smile would be gone, replaced by a frown and wary features. That was just part of life, but something within him didn’t want this girl to be affected by it.

This meeting was getting odder by the second.

Mr Ford retreated, leaving his wife to deal with the proceedings.

“The protection you offer is that no harm will come to the family, as well as you supplying money to cover our debts?” she asked.

“The deal would be between Sophie and me,” interrupted. He found that he wished to see the real-life vision of the girl in the photo. To witness her innocence himself and to see her reaction to him. Would she be as affected by him as he was by her?

Share what you thought about The Valentines: A Box Set and earn reward points.