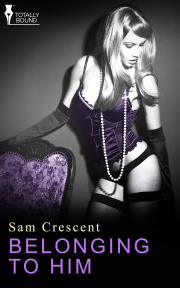 He won't take no for an answer.

Simon Allen is a billionaire and a dominant. He takes what he wants and to hell with the consequences. From the moment Hope Pattern enters his office for her interview as his personal assistant, Simon knows he is going to have her.

Taking Hope as his sub is the easy part. She gives him everything: her body, her trust and her heart. But she refuses to be his wife. Simon will not give up until Hope is his wife. He hasn't become a billionaire by giving up. Hope will be his.

She is crumbling under his domination. What will happen when she gives Simon that last part of herself? Will he be done with her or will he finally prove to her what it means to be his woman?

"Be my wife," Simon Allen said to the woman bound to his bed.

Hope Pattern bit her lip to stop herself from crying out. He pressed a finger on her clit, making it hard for her not to beg him to continue. She wanted him to give her the orgasm he'd been denying her. Simon had been tormenting her for the past few hours. Every single time he touched her, he only made her want him more.

She knew what he was trying to do. For the past few weeks he'd constantly asked her to be his wife and every time he asked she gave him the same answer. They'd been together for a year, but she refused to give in to his one final demand.

He glared at her before moving away from the bed. Hope lay back on the sheets, happy for the small reprieve on her body. He'd not done anything to hurt her. Simon was not the type of man to harm a woman, but a rest from the sexual teasing was a welcome break. She closed her eyes while taking deep breaths to calm her erratic heartbeat.

"I'll be back shortly. I mean it, Hope. By the end of this weekend you'll consent to be my wife and that will be the end of it." Simon slammed out of his bedroom, leaving her tied to his bed.

The bed was luxurious. The Egyptian cotton sheets were a pleasure to have under her naked skin. The rope that tied her wrists and ankles to the bed was soft against her skin. Simon was a dominant, not a sadist. He loved bringing her pleasure and the pain he used was only ever intended to heighten her arousal.

She'd never known a man like him. The moment Simon entered a room he commanded attention and respect from everyone present.

Hope opened her eyes and gazed at the mirror on the ceiling. She stared at her body, seeing the red marks from his lips on the tops of her breasts. Simon had forgotten to shave before kissing, licking and sucking her body. It was unlike Simon to forget even such a minute detail.

Since the moment she'd met Simon he'd taken over her whole world. Their meeting had been unique to say the least. The start of their relationship would stick with her always.

An interesting read with some flashback scenes set to develop the character relationship, Sam Crescent manages to create a reasonably enjoyable story that is full of some sexy imagery as the two main...

Share what you thought about Belonging to Him and earn reward points.

Sam Crescent has been announced as one of ARe's Top 10 Bestselling authors of 2014.