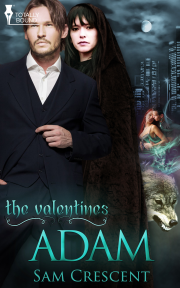 Book 3 in the The Valentines series

To figure out the present, they need to go back to the past.

Poppy is the only remaining necromancer in the world. She is the one in control of the dead and she has been sent to the Valentines. There is an evil force at work and she must help Adam Valentine to uncover it before it's too late.

Adam is intrigued by the young necromancer. Her scars do not affect him. He sees the strength inside her and he likes it. All he wants to do is protect her and claim her as his own.

They are on a mission to find out who the real alpha of the Beyer West pack is. But Poppy's world is about to turn on itself as she needs to make a choice. There is no room for love in the life of a necromancer, yet after centuries of being alone, Adam has filled her life with meaning.

People will die and secrets will be revealed as the balance that protects them is broken. Can their love survive as the world is about to be sent into chaos? This is no longer about the wolves but something much bigger that neither of them can fight.

Reader Advisory: This book contains scenes of violence or scenes that might offend some readers. Note this book is part of a series and is best read in order

"Poppy, wake up." Someone was touching her arm. No one ever touched her skin. Most beings were repulsed by what she was. Each wound was a testament to the battles she'd fought and won over the centuries.

She batted away the irritation that refused to let her sleep. She cried out in shock as firm lips pressed against hers. No one had kissed her before. The contact shocked her more than the touch of the hand on her naked flesh.

Screaming, Poppy lashed out, sending Valentine flying through the air and landing on top of the wardrobe in the room she slept in at the Valentines' mansion. The wardrobe broke apart where landed.

The man who'd been trying to wake her up groaned and pulled out of his side a chunk of wood that had managed to embed itself just below the ribs.

She cursed her own stupidity. Usually when she slept, she kept the door locked and surrounded by charms to keep the dead out. A true necromancer struggled to sleep at the best of times. Ghosts and damaged souls were everywhere the naked eye couldn't see, but she saw them.

"I'm sorry," she whispered. She wrapped her cloak, which must have opened during her sleep, back around her. Poppy hated more than anything for to see her scars. He was the first male she had ever desired.

Her scars were gruesome and she did everything in her power to keep them covered when she was around him.

"Shit, Poppy. You were screaming in your fucking sleep." Blood seeped out of the wound. She saw it was already healing. The magical power of the vampire was a wonderful thing to witness.

"Well, you shouldn't interrupt a person when they're asleep." Her lips were still wet from his small kiss. She wanted to lick her lips to see if she'd taste him on her tongue.

Her heart mourned the loss of connection. The first kiss she'd experienced from a man she liked, and she'd gone and thrown him across the room. At this rate she would never know the true intimate touch of a man. When was around, she found herself longing to know what it would feel like to have him touch her. Intimately touch her. Would his touch be gentle or rough?

"I banged on the door. It wouldn't open at first and then it was like it opened by itself."

She watched as he rubbed his head, clearly trying to focus. "I'm sorry."

"Yeah? Why are you wearing the cloak?"

Poppy held the fabric between her fingers. The cloak provided her with protection from the stares of others and made her feel secure. "It's my cloak."

"Is this about the scars again? It's a fucking ugly cloak. Couldn't you get one in a lighter colour?"

She tensed. Her scars may not repulse , but he hadn't seen all of them yet. The cloak was the last thing she held from the time with her family. With how old she was, it would probably be deemed either vintage or scrap material.

"What did you want me for?"

He shook his head and turned towards the mirror. All he would be able to see was a black blur of a reflection. Whenever she entered a room, she made sure the mirrors couldn't show her true image. She found it freaky when the girl from the other side could be seen staring back at her.

"Did you have a bad dream?" he asked.

She liked the sound of his concern too much. "What did you want me for?"

sighed, moving closer to her. "Poppy, you're an enigma. You show up all big and powerful, and you don't share your secrets well."

His hands rested on her shoulders and it took Poppy a lot of willpower not to react. She struggled between the desire to push him away and the desire to move his hands to cup her breasts. The conflicting emotions inside her were starting to wear her down.

"Just tell me what you want?"

He sighed, let her go and walked towards the door.

"They're meeting in the study again. I swear I'm starting to live in that fucking room. Join us when you're ready."

Poppy nodded and watched him go. They should have left the day after the attack on Katie-over a week ago -but Robert hadn't allowed it. Robert had decided it was too close after losing Katie and learning the true curse of the wolves. He'd ended up calling off the initial search for the original alpha of the Beyer West pack. In doing so, Poppy had taken up residence-much to the younger brother's disgust-in the Valentines' home.

Placing a hand to her chest, Poppy winced. She opened the cloak and the top buttons of the black dress she wore. She waved her arm across the mirror so that her true reflection appeared. Poppy turned away from the image when she first saw herself. Her primary response was revulsion at the vision before her, but she forced herself to turn and look.

The single raised scar from forehead to her chin had come from a dead nymph who had refused to believe she wouldn't be young and sexy forever. Several small scars that had come from nails dotted her cheeks-some of the people didn't like the fact that they were dead and would fight the transition from Earth to the realm of death. The scar on her neck had been the result of claw marks from a mightily pissed off werewolf. The ones over her heart-the vulgar criss-cross lines-were the result of her own forced transition. Closing her eyes, she opened a few more buttons of her dress until the whole top part of her breast was visible. The scar looked like a chessboard decorating the skin above her heart. The criss-cross was in the middle of a circle that outlined her heart, followed by a deeper line where they had cut her heart in two.

She placed a finger over the smooth lines and winced. When she pulled it back, a smear of blood was on her finger.

Gasping, she looked in the mirror. Blood was seeping from the wound. Her hand covered the marks and she fought for breath. Poppy wanted to scream, but she could do nothing. She gazed into the mirror and saw the blood rush from her eyes, mouth and nose before, in one swift, harsh move, she was flung to the floor on a roar of absolute agony.

I have read the first two novellas in this series, Robert and William, and enjoyed both books very much. Since each story builds on the previous one, I would suggest reading them in order for maximum...

Share what you thought about Adam and earn reward points.

Other books in the The Valentines seriesView Series Page