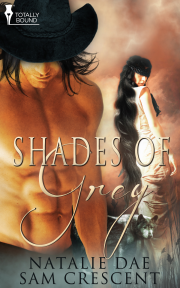 She's everything Travis Williams has ever wanted, but with murder in the cards, will the hunky shifter succeed in claiming Sarah French as his?

Travis Williams has steadily fallen in love with ranch owner, Sarah French. She's sexy as sin, beautiful inside and out, stubborn…and as spirited as one of her feistiest horses. She's going to be hard to tame, but if anyone has the balls to do it, Travis does. After all, he wants to win her and win her good—by loving the Texan bones of her and taking her to heights she's never been before.

Sarah French has a problem—she sees things in only black and white and doesn't trust men. Though she employs all males on her ranch, it doesn't mean she has to like them. An only child, she's grown up feeling inferior since her mother died while giving birth to a much-wanted son. All her life, Sarah has vowed to be as good as-or better than-any man, and no one will persuade her otherwise. She's strong, she's tough, and she's obstinate as all get out.

However, her icy façade is about to be melted, because not only Travis has her in his sights as a potential bed-mate, local bad-boy Clark James has made it clear he'll take Sarah whatever way he can…including by force.

With her emotional walls tumbling around her, the suspicion that the man she loves is a wolf, and Clark making her cringe at every turn, Sarah must learn that not everything is so clear cut. Sometimes, you have to look at the world in shades of grey.

Reader Advisory: This book contains a graphic but brief description of injuries sustained by a minor character after a violent sexual assault.

Travis stood on the edge of Sarah French’s ranch and sniffed the air. Shit, he could smell her sexy-as-fuck scent from here, would recognise it anywhere. In his wolf form, despite the night cloaking him, he risked being spotted or shot, but hell...what he’d heard earlier had spurred him into visiting her now.

Seemed local asshole Clark James was intent on making Sarah his woman tonight, regardless of whether she wanted him or not.

That wasn’t an option.

Travis narrowed his eyes, cocking his head to listen for hunters. They roamed this area freely all year round, even though they shouldn’t be on Sarah’s damn property.

A lone woman’s requests were easy to ignore.

He looked up at the moon, the big silver ball obscured by thick grey clouds pregnant with rain. He reckoned there’d be a downpour before the hour was up, maybe a storm tagging along for the ride. The autumn weather had been all kinds of crazy lately—warm one minute, teeming with rain the next. The different aromas the rain threw up messed with his sense of smell, obscuring those he would have caught with no trouble at all in the dryer seasons.

Deeming it safe, he loped across the grassy field surrounding her white house, keeping his eyes keen to any movement in the shadows. A line of trees stood to his right, their trunks like thick bodies topped with an abundance of hair. The leaves hadn’t fallen yet, and in the daytime they were a riot of reds, yellows, browns and oranges. Wouldn’t be long and those branches would be laid bare, skeletal arms and fingers stretching into the winter sky.

He’d wanted to make love to Sarah beneath them for the longest time. Since last summer when he’d first rolled into town looking for work. He’d found it, right here on her ranch, and, hell, he’d found the woman of his damn dreams as well.

He reached the picket fence separating her house from the fields and paused. Sniffed again. All he smelt was her.

He slunk low and crawled under the fence and, on the other side, scoped the area again. You couldn’t be too careful around these parts. One wrong turn and you were fucked. Those hunters, Clark James and his cronies, didn’t give a shit what they killed. Travis had heard tales of them killing a man once, some hiker kid who had wandered into the mountains at the back of Sarah’s place. Denial had come quickly, as though they’d got their stories straight before news had hit the town of a dead body on the banks of Gordon’s Creek, but Travis had known better. Had known by the glint in Clark’s eyes that something was amiss, had been able to tell by the scent of blood coming off him in waves. Yeah, he might have washed it off, but it had still lingered. A wolf could smell it—no problem.

Baring his teeth, Travis padded towardsssssss Sarah’s house, heading for the French doors to her living room. He’d keep out of sight, wouldn’t want to frighten her, but he had to see if Clark was there. He couldn’t smell the man, but Travis wanted to check just the same.

He stared through the glass, seeing Sarah curled up on the blue velour sofa, legs tucked beneath her, a book on her lap. A baby-pink nightgown covered most of her body from his view, and he was glad of that. Wouldn’t feel right watching her if she was exposed, unaware he was out here. He was no stalker, no freak.

The fire to the right of her blazed—long licks of yellow and orange flame that pranced frenetically. What he wouldn’t give to be in there with her right now. She was beautiful, no doubt about it, the kind of woman every man wanted. Trouble was, most single men around here did want her, hanging around the way they did, asking if she needed help with this or that. Apart from Travis and a couple of others, Sarah only employed married men. A sure-fire way of keeping safe, she’d said. He’d asked why she’d taken him on to groom the horses and give them exercise.

And that was all he’d got out of her.

It churned Travis’ guts when he thought about one of the other men touching her. Made him see red every time. So why hadn’t he told her how he felt? Why did he stannednednednednednedd on the sidelines, just being her friend and employee? Simple. Because what woman would believe he could shift into a wolf? What woman in her right mind could accept that? Sarah was level-headed, strong and independent, saw things in black and white. Anything grey didn’t figure with her. It was a frustrating trait, one that had led to many heated discussions between them, ending up with him walking away allowing her to believe she was right and he was wrong.

But with Clark fucking James, he wouldn’t be swayed. That man was bad to the marrow. Travis would just have to make sure Sarah saw it, that was all.

She shifted in her seat, flicking over a page in her book. He wondered what she was reading this time. Maybe one of those horror novels she enjoyed so much, or a thriller, perhaps. He should have known she wasn’t the romance type. No hearts and flowers for this girl. She liked it as real as it could get, true crime being her favourite read, so she’d said.

Share what you thought about Shades of Grey and earn reward points.