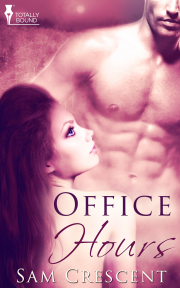 One sexy boss, one fiery red headed temptress, a snowstorm and some hot, steamy sex. What happens when they get back to the office…?

Fiery red headed temptress Anya King is desperate for the carnal delights of a pleasure weekend. A chance to indulge in every sexual fantasy.

Demanding sexy boss, Nathan Banks, has signed them both up for a "team-building" weekend, in the beautiful country town of Buxton.

Innocent weekend turns to hot, lusty sex. Enough to melt the snow outside and the ice around their hearts. Will the job she loves survive the weekend? And will their time be more than just a moment?

“What the hell is this?” Anya King stormed into her boss’s office carrying the offending memo and slammed it with as much force as she could muster onto his desk.

Nathan Banks stopped typing to glance at his personal assistant, then at the memo he’d left on her desk while she went out to lunch. “It’s about a team-building weekend. It’s a new scheme to help colleagues work together better.”

“I can clearly see what it’s about, Mr Banks. What I want to know is why my name is on that list?” Anya placed a hand on her hip. She needed to keep her head, relax and breathe.

“I signed us up for the course as a team.” He pushed the paper away, looking at her with calm composure. Anya felt anything but calm.

“You did this without even consulting me?” She swallowed down her anger, keeping her fiery temper at bay. Work relationships were supposed to be kept professional. It wouldn’t do for her to lose her temper.

“ In case you hadn’t noticed, Miss King, I happen to own this company, what I say goes and if I think this weekend will benefit my company, as my personal assistant you’ll be accompanying me. No questions asked.” He looked pointedly at the memo until she picked it up again.

Anya watched him go back to his computer, his sure, sturdy hands typing purposefully away. Clever hands that could bring a woman all kinds of sexual pleasure, if all of the rumours floating around the office were true. Anya tried not to think about her boss and sex. It was wrong and unprofessional, but sometimes when she was alone images of Nathan crept into her mind, and not all of them in employer-employee situations.

“I have plans this weekend.” She folded her arms underneath her full breasts. She needed this weekend! There was only so long she could resist her natural urges. Face it, she was over-sexed. Images of Nathan fucking her had entered her mind one too many times of late. Time away with another man, or men, should put her system back to rights. Nathan could go back to being just a man she happened to work for.

“Cancel it.” He didn’t even lift his head.

“How am I supposed to cancel at the last minute?” She wasn’t going to give in just like that. He was going to hear her out whether he liked it or not.

But Nathan was just as stubborn as she. “Find a way. It’s not my problem. I’ll see you here tomorrow at nine. Pack for a busy weekend and read the memo, it’ll tell you what you need.” He dismissed her, lifting up his phone to dial an associate.

Anya thought about waiting it out, to see if he really was calling someone and not just doing it to get rid of her. Instead she nodded, simmering to herself, took the memo and quietly left his office, closing the door without making a sound.

Sitting behind her desk, she grabbed her bag, pulling out her ticket and the file about her planned pleasure weekend. Tomorrow she was supposed to be leaving for a small, isolated mansion, where every little lust and desire the body craved could be experienced, along with the promise of total anonymity. The ticket alone would have left most people crying at the cost. She could only just afford it on her salary.

She sighed. It was a good job the ticket could be used on any weekend over the course of a month. But her ticket was for December, one of the busiest times of the year, which meant her time was already in short supply.

Anya usually went for the first weekend of the month, but overtime at work, along with life in general, had got the better of her this month, so she had been planning to spend the second weekend of December at her erotic hideaway. Had been, until her domineering boss had demanded her presence on his stupid team-building weekend. He said, “Jump,” and she had no choice but to say, “How high?” Anya took pride in her work, but sometimes being the best personal assistant was a pain in the arse. The reward for good work was more work. Shaking her head in disappointment, she reflected that at least there were still two weekends left after this work-together-better nonsense or whatever he wanted to call it. She folded up her ticket and placed it carefully back in her bag.

Share what you thought about Office Hours and earn reward points.