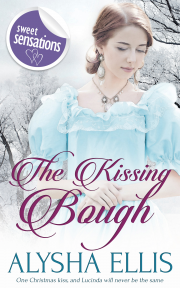 One Christmas kiss, and Lucinda will never be the same.

No one expects mere Miss Lucinda Demerham to refuse a proposal from Edward, Lord Beaufield, no matter how stuffy and puritanical he might be. His invitation to Lucinda and her parents to spend Christmas at Beaufield Hall is seen as a certain preamble to an engagement. But when Edward’s younger brother James erupts onto the scene, the dreary Beaufield Christmas is suddenly alight with revelry.

There are feasts, surprises and unexpected joy—and a Kissing Bough above the door.

“I will behave like a proper young lady,” Lucinda Demerham whispered to herself. “I will not trip or say the wrong thing. I will not embarrass myself or my parents. I will not set fire to the rug just to see if Edward is capable of a spontaneous reaction.”

Having mustered her self-control, she entered the salon at Beaufield Hall and made her curtsy to the Dowager Countess of Beaufield. The countess returned the greeting with cold formality, then turned her attention to Lucinda’s parents.

Edward Lymon—Lord Beaufield—stepped from his mother’s side and bent over Lucinda’s hand. “Good evening, my dear. Welcome.” He lifted his chin and looked down his nose at her the way he always looked at her, as if he expected abject gratitude for his condescension to a mere Miss Demerham.

His expectations were destined to remain unfulfilled. Lucinda disliked his harsh piety, his cold demeanor and his rejection of anything he considered frivolous. Why Lucinda had piqued his interest was a mystery.

She’d met him on her very first night at Almacks. Lucinda’s mother, having managed to secure the prized voucher, had impressed on Lucinda the utmost importance of doing nothing to risk it being revoked. They’d arrived far too early to be fashionable and sat against the wall, doing little more than sharing desultory observations.

When the host appeared before them, begging permission to introduce Lord Beaufield, her mother gave flustered consent. Lucinda had smiled happily. No young lady ever wanted to be a wallflower, and Lord Beaufield, if not god-like in his appearance, was in a pale, refined way, quite good-looking.

Her foot was already tapping in time to the music as she waited to be led into the set. The dance began but Lord Beaufield issued no invitation to join it. Instead, he sat next to her mother and regaled her with information about himself. His family’s heritage, his position in society. His decision to marry.

He confided this was the real reason for his sojourn in London. He abhorred gaming clubs, had no interest in the theater and couldn’t abide musical performances. He attended Almacks, but did not dance.

The moment he said it, Lucinda’s mother decided Lucinda would not dance either. Instead she was forced to sit, miserably obedient, wishing she were one of the lucky ones whose hands were solicited for quadrilles and reels, or—for those so fortunate as to gain approval from the patronesses—the waltz. Listening to Lord Beaufield drone on was no compensation.

From then on, at every social event, he sought them out. He talked about his estate, of his notions of right behavior. Of the value of social status and order. He never tried to find out what interested Lucinda, or seemed to care what she thought about anything.

Mrs. Demerham thought him the epitome of good sense and manners. Lucinda, who seemed to have inherited her restless disposition from some secret black sheep in the Demerham family, thought he was a bore.

Lucinda wanted to dance, to talk to interesting people, to have fun. Her mother wanted her to make a good marriage. She didn’t seem to care that Edward was not the type of man to appeal to her rebellious daughter.

Share what you thought about The Kissing Bough and earn reward points.