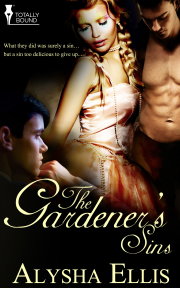 The gardener's sin is my lord and lady's pleasure.

The daughter of an earl, Lady Mary Linden never noticed the servants who toiled on her father's estate. But her aristocratic blindness shatters when she meets Drake, the head gardener. Drake shows her sensuous delights she could not have dreamed of. Just when she thinks he has taught her all there is to know, Drake introduces a new player into their game…Mary's cousin Harry.

What they did was surely a sin…but a sin too delicious to give up.

Reader Advisory: This book involves ménage scenes with a lady, her cousin and the gardener.

Publisher's Note: This story has been previously released as part of the At Your Service anthology by Totally Bound Publishing.

"Mary, I shouldn’t give this to you. It’s not right." Lady Mary Linden, third daughter of the Earl of Whitten, snatched the book of Ancient Greek poetry from her cousin Harry’s hand. "Rubbish. You’ve read it. Why shouldn’t I?"

"Because you’re a female!" Harry’s voice rose in offended outrage. "Some of these poems are…um…quite shocking."

"The poems are from the classical Greek period. They’re not meant for women. The female constitution is delicate," Harry said. "Excessive stimulation is harmful."

"You don’t really believe that nonsense you’re spouting." Mary grinned at him. Her cousin knew her better than that. He knew she was hopelessly curious—about everything.

"A lot of people do believe it." He ran a hand though his hair, dislodging a straight golden lock that flopped onto his forehead. "They also say women don’t like sex."

"That’s probably not true either," Mary argued. "If women were given the chance I know they would enjoy sex just as much as men do. We just never get to find out. Just like we never get to learn about History and Politics—and Ancient Greek poetry. How can I tell I won’t like something if I never get told anything about it?"

Her cousin shook his head. "I should never have started lending you any of my books. I knew no good would come of it."

Mary ignored the last part of his statement. "I’m grateful for all the things I’ve learnt. I couldn’t have done it without your passing on your books to me." She paced the floor, her steps long and fast, hardly befitting the elegant glide expected of a lady. She didn’t care, she was heartily sick of restrictions, infuriated by the list of things boys were actively encouraged to experience that were forbidden to girls.

"But this is different. This book has poems in it that talk about things you know nothing about."

"Well once I read them, I will know, won’t I?" she reasoned.

"If I expire from hysterical over-stimulation I am sure no one would blame you." She rested her hand on his arm. "You needn’t worry."

His forehead remained wrinkled and his grey-blue eyes looked distant and disturbed. "The kind of relationship the poet describes. It’s...well, most people think it’s disgusting. And it is against the law in this country." The furrow between his eyes deepened. "I don’t know how you came to know the book existed, or why you asked me for it."

"I read about it in one of the other books you lent me." She stood on tiptoes and kissed his cheek. "And once I read that it existed, who else would I ask about it but my wonderful cousin Harry? I knew if you had a copy you wouldn’t refuse to give it to me."

"When have I ever refused you anything," he sighed.

"I don’t want to do anything that could cause trouble. Not after all your family has done for me."

"Shh." She put her hand over his mouth. "Don’t you dare start telling me how grateful you are. And don’t talk about my family. It’s our family and always has been."

Mary couldn’t remember a time when Harry hadn’t lived with them. His mother, her father’s sister, had died in childbirth and his father had gambled away his fortune, ignoring the needs of his infant son. Mary’s parents had taken Harry and raised him as their own. She’d grown up loving her gentle cousin.

Share what you thought about The Gardener's Sins and earn reward points.

I love anything that makes me laugh. I want people to finish my books slightly steamed up and with a smile on their faces. That being said, The Gardener's Sins isn't really a comedy. The character of Drake was far too alpha and too much in charge to play the story for laughs…