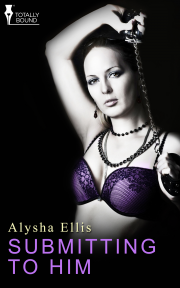 Elise loves her husband. He shares her with a handsome, dominating stranger.

Billionaire Blair Cowdery and his wife Elise travel the world seeking new pleasures. On the island of Santorini their status ensures they get the personal attention of their hotel's handsome young manager, Nick Zervelos.

Blair's pleasure is to share his beautiful wife with someone who appreciates her special gifts. Nick's masterful nature makes it plain he is such a man. Blair soon discovers he and Nick share an interest in bondage and rope play.

Together Blair and Nick show Elise the pleasure of submission and the freedom that comes from being bound.

The two men work together, orchestrating a series of heated sexual encounters. They take Elise to a new space, pushing her limits. They teach her that in losing herself she will discover her true identity.

By the time the game of dominance and submission is played out, Blair, Nick and Elise are bound with ties too strong to resist.

Elise Cowdery stepped out of the limousine. The hotel gleamed in the hot Greek sunshine, the stark white walls contrasting with the blue of the domed roof. She smiled at her husband Blair. "It’s beautiful."

"I think the people of Santorini might object." She squeezed his hand. "And no matter how much money you have, you’re way too canny to buy the hotel before you find out whether it’s going to be a profitable investment or not."

Elise walked her fingers up the front of his shirt. "You know what I want, don’t you, baby?"

"I do," he said. "But it remains to be seen whether it can be had here." The familiar hot burn of his hazel eyes sent shivers of anticipation skittering up her spine. She splayed her hand over his chest, and rubbed her index finger across the hard nub of his nipple.

"May I take your bags, Sir and Madam?" The voice from behind them startled Elise and she dropped her hand to her side. The porter stood there, accompanied by three other members of staff, all eager to serve them. Blair winked at Elise. It didn’t take much to work out that Blair’s name had been recognised. His wealth made sure of that almost everywhere they went.

The impression was confirmed when they were met at the door by one of the most striking men Elise had ever seen. Tall and dark, handsome as the gods that were said to once have inhabited Greece, he stepped forward and introduced himself. "I’m Nick Zervolos, the manager. Welcome to the hotel and to Santorini. Your check-in has already been completed." His English was perfect, the slightest suggestion of an accent only adding an intriguing edge. "There is no need for you or Mr Cowdery to be inconvenienced."

The words were deferential enough, but his light grey eyes, startling in his golden-tan face, focused on Elise in a way that made her pulse flutter. She looked quickly at Blair to see if he’d noticed. He raised one eyebrow. She should have known. Very little escaped his attention, especially another man’s interest in her.

Share what you thought about Submitting to Him and earn reward points.