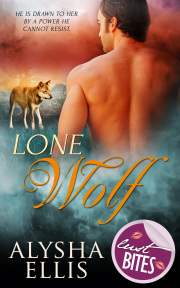 Lewis Carew is a lone wolf, unable to form a relationship with anyone. Every month, on the night of the full moon, he seeks out a new woman for a torrid bout of wild, anonymous sex. He slakes his appetite then leaves before midnight.

When one of these encounters leads him to Marnie Grantham, he is drawn to her by a power he cannot resist. Marnie is the only woman Lewis has ever wanted for more than a one night stand. But how can their love survive when he cannot tell her the truth?

Lewis is a werewolf. Revealing his secret could mean losing not only Marnie but also his life.

Publisher's Note: This book was previously released by Totally Bound Publishing under the same title. It has been expanded, revised and re-edited for re-release.

The woman on the dance floor stared at him. Her full red lips parted, her eyes flashed and her body swayed to the beat of the music like a slow, seductive invitation to sex. The animal in Lewis stood up and howled.

From the moment he’d felt a prickle at the back of his neck and turned to see a pair of golden brown eyes staring at him, he’d struggled to keep his wild desire under control. The crowded club, the thumping beat of the music, the steamy heat and the pungent smell of a hundred writhing, sweaty, perfumed bodies faded into the ether, leaving him staring open-mouthed at the most compelling, sexy woman he had ever seen. Her silver dress clung tightly to the ripe curves it covered, but the deeply dipping neckline and the hem riding high on her thighs revealed enough golden skin to make him salivate.

She dropped one eyelid in a wicked wink, keeping her gaze locked on him, and began a sensuous gyration on the dance floor, a solitary performance designed to make every man present wonder what it would be like to have that body rubbed against his. But she didn’t look at any other man. She focused on Lewis.

His cock stirred with a force more compelling than mere attraction. The driving urge to mate drained the blood from his face and sent it surging into his penis, making him rock-hard and ready.

He shouldered his way through the crowd until he reached her. She looked up, and a smile curved her lips. She nodded and wrapped her hands behind his neck, never breaking her sinuous rhythm. His control shattered, and he reached out and grabbed her, his hands landing on her hips, pulling her in until she ground against his erection, giving him what he wanted and inflaming his desire until it smoked and sizzled like wildfire.

His nose wrinkled as he picked up the unmistakable scent of pheromones and arousal wafting from her bare skin. He growled low in his throat.

She wriggled her hips, and her smile grew hotter. Her tongue flashed out to lick her lips. “I like a man in touch with his feral side.”

Lewis suppressed a snort. If only she knew.

Her lips moved closer to his ear. The words her hot breath carried made his groin clench. “I want you.”

She unlinked her arms from the back of his neck and wrapped her hand around his wrist. She was halfway across the tiny dance floor, their joined arms at full stretch, before his stunned brain got his feet to move.

She led him through the crowd, down a darkened corridor, until they came to a blank door. His hyper-acute senses picked up the smell of cleaning products before she turned the handle and dragged him in. He didn’t know if she’d found the janitor’s cupboard through prior knowledge or a lucky guess, and he didn’t care. All that mattered was getting that silver dress off and getting himself inside her.

Share what you thought about Lone Wolf and earn reward points.