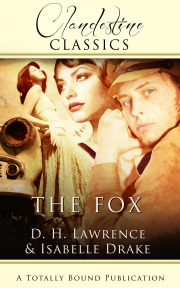 A young man returns from war to find two women living on the isolated farm he'd called home. Needing to dominate, he sets out to put his life in order.

The bitter, dark night a rugged man appears on their doorstep, everything about the quiet life of Ellen March and Jill Banford changes. The presence of the powerful, brooding man complicates the simple daily existence of their lives on their struggling chicken farm.

Henry Grenfel, a young soldier recently returned from war, is determined to possess the stronger, more forceful of the two women—Ellen. His need to possess her knows no limits and he uses every opportunity he finds to pressure her into breaking her ties with her best friend, Jill. Jill's dislike for Henry turns into pure hatred when she realises he'll stop at nothing to take Ellen from her.

As the tension among the three of them builds, Henry coerces Ellen into submission, forcing her to recognise her own need for the sexual release only he can provide. After Ellen accepts the inevitability of his dominance and agrees to his marriage proposal, the resentment brewing within the love triangle takes an even darker turn.

Reader Advisory: This book contains some scenes of violence.

He had been sawing logs for the fire in the afternoon and his entire body had been, at one point, covered in a fine sheen of perspiration. What remained now was the scent of his exertion and the lingering effects of the satisfaction that comes across a man when he has done a hard job well. Darkness came very early. It was still a cold, raw mist. It was getting almost too dark to see. A pile of short sawed logs lay beside the trestle. March came to carry them indoors, or into the shed, as he was busy sawing the last log. He was working in his shirt-sleeves, and did not notice her approach; she came unwillingly, as if shy. When she bent down he saw the firmness of her muscles and the easy way her strong arms moved the logs. She was a fine prey, indeed and they both knew it. He saw her stooping to the bright-ended logs, and he stopped sawing, letting his probing gaze rake across her. A fire like lightning flew down his legs in the nerves and he was more aware of March than he ever had been. Everything about her called to him, her scent, her body, her essence. It was not enough to be near her. He needed to possess her. Indeed, master her.

"March?" he said in his quiet, young voice.

She looked up from the logs she was piling.

He looked down on her in the dusk. He could see her not too distinctly and he struggled to see what he could of her. If only she would stop shrinking away from him and expose herself to him as she ought to.

"I wanted to ask you something," he said, feeling that lightning fire burn in his limbs.

"Did you? What was it?" she said. Already the fright was in her voice. But she was too much mistress of herself. And it was that control, he realised, that he most wanted to take from her. She would weaken and give herself to him. He would see to it. As he felt that was what he wanted, he knew she must want it too.

"Why"—his voice seemed to draw out soft and subtle, it penetrated her nerves—"why, what do you think it is?"

She stood up, placed her hands on her hips, and stood looking at him transfixed, without answering. Again he burned with a sudden power.

"Well," he said, and his voice was so soft it seemed rather like a subtle touch, like the merest touch of a cat’s paw, a feeling rather than a sound. "Well—I wanted to ask you to marry me."

March felt rather than heard him. She felt him everywhere—on her face, across her breasts, deep inside her, filling her and taking her soul. She was trying in vain to turn aside her face. A great relaxation seemed to have come over her as she had known this moment was coming and finally it had arrived. She stood silent, her head slightly on one side. He seemed to be bending towards her, invisibly smiling as he came for her. It seemed to her fine sparks came out of him, ready to jump across to her and burn through her skin.

Share what you thought about The Fox and earn reward points.