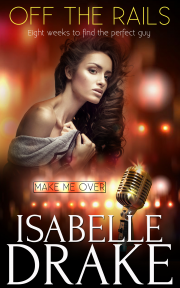 Book 1 in the Make Me Over series

High school reunion—three words that threaten to derail Madison’s life. Now she has only eight weeks to find the perfect guy, the perfect job, or a way to pretend she has the perfect life.

Madison is less than thrilled when the invitation to her five year high school reunion arrives. When she refuses to RSVP with a yes, her best friend Tia reminds her of a pact they’d made—they’d use the reunion to show up everyone from school. But Madison can’t show up anyone. She isn’t the super famous superstar she’d bragged that she’d be. She’s an unemployed singer with no boyfriend and no job. Her only option? Find a way to fake the perfect life.

Eight weeks isn’t much time. But it is long enough to get drunk and enter a bikini contest, redefine the term date-from-hell, get caught in an awkward ménage and win a bar fight. But will all this bad behavior help Madison snag the blond, blue-eyed geek who was foolish enough not to notice her in high school? No matter what it takes, she’s going to find out.

A stupid postcard from Cash’s car dealership with a tin key superglued to it. “If this key fits you could be a winner!”

Are people who get laid off from stupid, lame ass call center jobs they didn’t really want in the first place winners?

No, they are not. Madison whipped the ad into her hallway trash can, where it landed on top of yesterday’s junk. Back to the rest of the mail.

An American Express statement. Madison hadn’t been anywhere in a long time, and everyone knows that AmEx is for travel, so she didn’t owe them anything. She whipped that one into the trash, too.

Up next, a cute card from her four-year-old cousin, Lizzie. The wobbly pink and red hearts shouted, ‘Its February 14th!’ The purple scribbles might be, ‘Happy Valentine’s Day’. Then again, they might be, ‘You’re unemployed! Whatcha gonna do now? Sell your Crate & Barrel living room set and move back home with Tom and Susan?’

Little kids should be avoided.

Especially when one is having a bad day.

Madison leaned against her apartment door to shut it, crossed to her kitchenette, and propped the card against the fern on her kitchen table. The plant dropped five brittle leaves in protest. Apparently, the plant also was struggling to live the successful, fun, up-and-coming life of a singleton in the hip and hopping city of Cincinnati, Ohio.

About the time Madison was going to throw away the rest of the really uninteresting crap she’d found crammed in her mailbox, she spotted the corner of a bright red envelope. The thick, glossy paper was heavy in her hand.

Her heart thumped, even though she reminded herself that there was absolutely no man who would’ve sent her a valentine. The only cards she’d ever gotten from XY chromosome creatures were those silly ones in elementary school. Hot Wheels and Transformers were hardly the stuff relationships were built on. Besides, everybody knew the boys only passed out cards because they had to. Unfortunately for the single women on both banks of the Ohio, there were no stiff-faced teachers roaming the hilly streets of the river valley reminding guys to stop at Hallmark.

She ran her fingertip around the edges, trying unsuccessfully to block out the impossible possibilities. Stupid, ridiculous notions that some guy had been admiring her every morning when she stopped at Starbucks. He was always busy making deals on his cell, so they’d never crossed paths. She hadn’t noticed him because he was what her mother would call a ‘big shot’ and always wore suits. And because she was ‘an idiot’, she was always looking at the rough-around-the-edges construction guys and figuring they must make more money than she’d realized if they got their java there instead of going to United Dairy for the ninety-nine cent deal.

Madison tossed out the rest of the mail and, still holding the card, slid up onto her tiny kitchen counter. She flipped the envelope over. The back flap was flat and smooth. It was sealed with some serious envelope sealer.

The return address was a PO Box.

Urgh. It could be some demented sex freak.

Um, no. That was not going to happen. He didn’t even remember his own wife’s birthday.

Trevor? Thinking he was funny?

Her brother was a lot of things. Funny wasn’t one of them. But cheap was, and that explained why he wouldn’t waste the stamp.

She flipped the card over again. This wasn’t a cheap card.

It’s from some singles group.

A quick, hot read that'll steam up your e-reader! OFF THE RAILS remains a short and sexy novella that even the most jaded former high school student can relate to.

With only weeks left to go before her high school reunion, Madison is not anywhere close to where she wants to be in her life. She's on a mission to get together with her crush from high school, and m...

Share what you thought about Off the Rails and earn reward points.