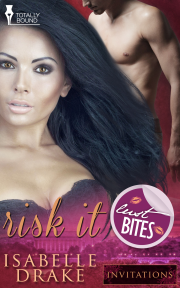 Book 6 in the Invitations series

Come to the Triple B Ranch and find your bliss! Gwen Baker has just been invited to participate in a new reality show, the Get Tied Down Challenge.

Couture dress-maker Gwen Baker says yes to spending a weekend at exclusive, singles-only The Triple B Ranch courtesy of the reality show, the Real DC. Recently dumped by a guy who insisted she wasn’t exciting or spontaneous, she’s eager for the chance to practice her man-hunting skills and take advantage of the live stream event to show off her custom cocktail dresses—even if the setting is a little bit rustic. Not one to be discouraged by setbacks like trying to look sexy in silk while roasting marshmallows over a campfire, Gwen arrives at the ranch ready to play along and pick one of the contestants. But the three guys from the city do nothing for her while the cook makes her ache for some serious sizzle.

As the head cook at the singles-only dude ranch, Connor Tate thinks he’s immune to the charms and temptations of the female guests. Long legs, curvy or cute…he can ignore them all. He doesn’t want any drama. He’s only at the ranch to earn cash for grad school. So when the cast and crew of the Get Tied Down Challenge arrive at the camp, he’s sure he’ll be able to keep to himself and avoid the raven haired-hottie roaming the trails. But an impromptu kiss with Gwen turns into a contest of domination that soon comes a test of wills—a test he’s glad to fail. He gives in to the sweet temptation she offers but he’s a long way from being satisfied.

“Do it! Open your mailbox! It has to be there. The Capitol Girl post said the notifications would arrive today.”

“I’m just about to look. I’ll call you right back.” Gwen said goodbye to her friend Sabrina then slipped her phone into her bag and pulled out her key ring. She rushed up the few steps to the entryway of her apartment building then unlocked the door. The cooler air inside swept across her skin, nearly making her shiver after walking in the steamy July heat.

Like in most of the residential buildings in her Washington, DC neighborhood, the mailboxes hung in a tidy row on the wall right inside the entryway. A few more steps and she’d find out if what Sabrina believed was true. Almost there… Until one of her neighbors, a retired college professor, came along, blocking her way as she was about to slide the small brass key into the mailbox lock.

“Good afternoon, Miss Baker,” he said, clutching a white poodle under his arms.

“Can you believe this is the third time Diego has asked to go out this afternoon?” The man jostled the dog and laughed. “I think he has a crush on the terrier from across the street. You know…the one who wears the sweaters?”

The small edges of the key pressed against Gwen’s finger, teasing her with the possibility that the mailbox held the invitation Sabrina had described. Still, she took the time to scratch behind the tiny dog’s ear. “I know that dog. I think the owner knits all those sweaters herself. I loved her Valentine’s one with the glitter hearts.”

“Hmmm…” The man looked up thoughtfully. “I don’t recall that particular one. Anyway, I told Diego not to bother. She’s probably one of those modern girls who doesn’t need a man.” He cooed to his dog then said to Gwen, “You know, like yourself, Miss Baker. No use for a man. No use at all. You never waste time with such things.”

Thinking of Nate, her boyfriend of a year who’d just dumped her because she was too busy and he’d decided he ‘just wasn’t that into’ her, Gwen forced smile. “Oh, you know”—she shrugged—“work and friends and…” She glanced at the mailbox then motioned to the dog who was peacefully resting in the man’s arms. “Diego is looking pretty restless. You better go see if his friend is in the park.”

“Yes, poor boy. Probably wasting his time, chasing after a dream, the way your own suitors are.”

Gwen didn’t bother correcting him. The professor moved on, calling goodbye from the door as she lifted the tiny key. The small silver door swung open.

A postcard ad for the yoga studio and the bill for her electric service. She looked again, to be sure. Nothing else.

Gwen crammed both back into the mailbox and slammed the door shut.

It was for the best. She didn’t really have an entire weekend to spare with three random guys. Maybe Nate was right. She wasn’t interesting. After he’d dumped her, she’d told herself it didn’t matter if she wasn’t exciting or didn’t spend any time on her personal life. She didn’t have time for anything that wasn’t going to make her new business a success. Cherry Couture, her fledging dress company, took every minute she had. Thanks to the contacts she’d made through Perfectly Professional, her friend Eva Marie’s event planning business, and a couple viral Twitter pics of women looking especially amazing in dresses she’d made, she’d been getting more and more requests to see samples and fill orders. That was good, for sure, but she still wasn’t satisfied.

This is a short, quick story that grabs you from the start! I love the beginning and it’s off to the races from there! I read it straight through and was excited to see how their story would unfold....

This was a very short story, just enough to tickle your taste buds. If you like something quick to read, this is the book for you.

Share what you thought about Risk It and earn reward points.

Cowboys are sexy. Cooks are sexy. So why not write about a cowboy who cooks?