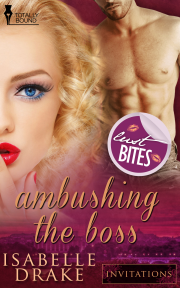 Book 5 in the Invitations series

A video camera, a too-short-to-ignore skirt and a come-get-me attitude—Jake Reed doesn’t stand a chance against Sabrina Weller.

Sabrina Weller has just moved to Washington DC and is ready to make the most of city life. When her cousin, Eva Marie, holds a welcome event, Sabrina meets Jake Reed. He’s awkward and abrupt but something about him makes her hot. The next time she sees him, he’s pretending to be Jay Allen, entry level new hire at Steelsmart, the same company she’s recently started working for.

Jake Reed, the socially inept new president of Steelsmart Corporation, has two problems on his hands. One, his newly acquired company has morale problems. Two, he wants to bed one of his employees. When his vice president arranges for the entire company to go on a retreat on a secluded island, Jake can’t avoid crossing paths with the sweet-talking, fast-living temp who continually teases and tempts him. He’s in over his head and she isn’t about to give up until she gets what she wants.

This from The Capitol Girl, Washington DC’s infamous blog—

Here’s some advice for any woman who’s recently moved to Washington. DC isn’t like other cities. Don’t waste time trying to decide if it’s a Southern city or a Northern city because that isn’t going to help you figure out how to behave or what to expect. It’s like no place you’re ever been. Lucky for you, you have me, Kelly M, and everyone else who stops by to write a little something for the Capitol Girl to give you some advice.

So this is for new people—

A DC girl knows what she wants and wastes no time going after it. What is the point of waiting? Exactly. There isn’t one. Don’t wait for the job you want, the guy you want, or an invitation to the best party in town. Go after what you want the minute you want it.

Get to know important people. It isn’t taking advantage, it’s smart. Information and connections are the way this city functions.

Show off what you know. It will make you useful and in turn will make others want to get to know you.

If you don’t know something but want to, learn it. Then do it. And then do it some more. Remember that tip about not waiting? This is a perfect example.

Forget all that ‘be nice’ stuff your mother told you. Don’t do things just to be a ‘good’ person. That isn’t going to get you anywhere.

Take chances. Most chances you only get once, so go for it while you can.

“Come on. You have to meet absolutely everyone.” Eva Marie tugged Sabrina’s arm, pulling her through the Friday night crowd of The Indigo.

The trendy bar in the lobby of the equally popular Washington DC hotel, The Continental, was packed with well-dressed twenty and thirty-somethings. Sabrina kept up, weaving through the clusters of people leaning against the polished chrome banisters and filling the cozy booths. “You didn’t have to do all this for me. Really, it’s too much. Why don’t you go enjoy yourself? I can manage on my own.”

“You love it and you know it.” Eva’s sleek blonde hair gleamed from the blue accent lighting.

Share what you thought about Ambushing the Boss and earn reward points.

• Captiva Beach on . Gorgeous beaches for sunning and great fishing on the . Super laidback. The shelling is best right after rain, so if you're there it's all right to hope for a fierce thunderstorm. I have a beautiful collection of shells in my bathroom, an everyday reminder of my fun on that beach.