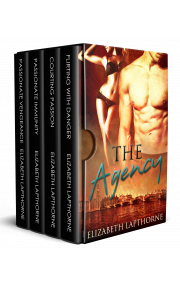 The Agency: Part One

The Agency series: Part One

Skye Adams thought she was meeting her father for an ordinary lunch. Instead she ends up running for her life on a deadly mission with only one man whom she can trust to keep her safe—Jack Berick.

Skye Adams is looking forward to a wonderful lunch with her father—Victor Adams—to celebrate her birthday after he returns from a work trip. Instead of a good meal of Thai food, however, Skye ends up on the run for her life. Black-clad strangers try to kill her, her father's partner Garth and decimate the restaurant to smoking rubble. Scared out of her mind, Skye turns to the only person she feels she can trust, Jack Berick, a rugged, mysterious man her father once insisted she believe in when all hell broke loose.

Piecing together a complicated web of lies, half truths and deceit, Skye and Jack must work out not only whom to trust, but figure out what happened to Victor and how to get him back— preferably whole and sound. The further they dig, the more convoluted everything becomes and Skye finally understands the world is not full of black and white, good and evil, but a messy mixture of grey.

In amongst the fear, fire and insanity, Skye realises more and more the searing attraction burning between herself and Jack is the only solid, reliable thing she can depend on. Losing her heart had not been part of the plan, but all too soon the intensity smouldering between them has raged way out of control, and Skye can only see one man dependable enough to remain by her side, in the future, no matter what might happen. That man is Jack, as they both tempt fate and flirt with danger.

Kimber dreams of adventure—finding it when she's asked to consult on a strange new case with Tristan—a member of The Agency.

Kimberly Melmoth has always dreamed of having a grand adventure, her life filled with excitement, danger and passion. When an old friend invites her to assist in an investigation looking into a project headed by a corrupt agent, she leaps at the opportunity. Sorting through mountains of paperwork doesn't mesh with her idea of being a spy,but the electric attraction she feels to her new partner, Tristan Walters certainly does.

The depth of the instant lust searing through his body takes Tristan completely by surprise. How can one petite woman with a head full of blonde curls overtake him so completely? Her grin can light up a room and her enthusiasm is infectious. His need to protect her at all costs is overwhelming, if only she'd listen to his words of caution!

As the case heats up, both between them and in the laboratory, what should have been a simple data review turns into something far deadlier. Tristan and Kimberly both realise that neither are immune when it comes to each other and the passion that burns between them.

After being rescued by new Agent Lucas Sloan, Abby seeks answers—and vengeance—for the unsanctioned medical testings performed upon her illegally.

Abigail Turner woke up from a nightmare only to find herself living in one. Discovering she had been unknowingly injected with an untested vaccine, then exposed to various diseases, she was the only living subject of a horrid trial. Rescued by a handsome hero, she struggles to come to terms with the depth of depravity she's been exposed to.

Lucas Sloane had felt the sensual pull of Abby since he'd first seen her photo. The woman and her situation had crawled deeply under his skin and he craved providing the strength that would help her get through her nightmares. Fiercely proud when she insists she help him with his mission to catch a multiple murderer, he swears to help her every step of the way.

Burning desire explodes between them and soon they are intimately connected. Racing against time to save even more people from the same disaster Abby had faced alone, they work together to hunt down the man responsible. Lucas knows that a part of Abigail just wants passionate vengeance, but how can he say no to her when she holds not only his heart, but also his soul?

Skye Adams knew first-hand that life was never easy when your dad was the equivalent of James Bond. She’d known this to some level from her very youngest days—though it wasn’t until her late twenties that she understood the true nature of his work. Her only knowledge while growing up was that her daddy’s work was ‘important’.

She couldn’t count the number of missed dance recitals, parent-teacher interviews or times someone else had had to drop her off home because she was the last one waiting to be picked up, seemingly forgotten by her father.

Lucy Adams, her mother, had died of cancer before Skye turned twelve. Skye knew her parents loved her very much, but that didn’t help the overwhelming loneliness that marred the ten or so years after her mum’s passing.

A chill of fear always shivered down her spine when she thought back to how she had almost passed by the one time her father had reached out to her for help. When the phone had rung at a little after two a.m., a bored-sounding operator had asked if she’d take an emergency, reverse charges call from Victor Adams who was at an unpronounceable hospital in Helsinki, Finland.

Skye’s first thought as she’d run a hand through her shoulder length, brown curls had been that the call was an elaborate joke being pulled over her by a friend. Laughing, still half asleep, she had assured the operator that, sure, she’d take the call. Skye had expected a howl of laughter followed by some quick commentary and identification of the friend forthwith.

Instead, a very shaky, weak, male had spoken, then stopped to clear his throat. The undeniable tone of her father had come once again over the scratchy connection.

“Skye, can you hear me? Damn this abominable hospital phone to hell,” her father had growled.

“Daddy?” she’d gasped, her warm blue eyes widening in the darkness of her bedroom as she shot bolt upright in her bed. She hadn’t wanted to believe that the call was from Helsinki and from her father, but his voice was unmistakable.

“I’ve run into a minor problem, sweetheart,” Victor had continued, pain evident in his every word. The very faint slurring had made Skye wonder what kind of painkillers they had given him, or possibly just how very much suffering he must have been enduring for his voice to sound so ragged. She’d never seen him so much as flinch before in her life.

Always her father’s voice and manner soothed and calmed her every fear. Victor Adams had always been the strongest, most steadfast man of her acquaintance. Fear had clutched at Skye’s heart, as to what could be going on, confusion had clouded her mind.

She’d reminded herself that, whatever happened, her father could handle it. Obviously something extreme had occurred and he’d turned to her for help. She needed to keep a grip on herself.

Skye had followed her dad’s clipped, precise instructions to the letter and, in what had felt like both forever and no time at all, she had made it to his hospital room, his travel suitcase packed, assisting him to discharge himself.

Victor had been shot in the leg, beaten and abused. She’d overheard the nurses gossiping that he’d nearly died from the blood loss. The transfusion and her father’s foreigner status as well as lurking police suspicion surrounding his true motivations for being in the country had convinced the doctors that the most stringent requirements regarding this man needed to be in place.

They would only release him to a family member.

His protégé and sometime partner, Garth Spenser, had also been present that evening when Skye had arrived. Tall, dark-haired, olive-skinned and with a neatly clipped beard, he sat in the corner of the room on the single chair and glowered at her as she’d tried to make sense of what her eyes told her. Garth had left, muttering something to Victor about ‘giving you some space’.

The moment they’d had privacy she’d demanded a full explanation. The dislocated kneecap and evident beating around his face and upper body did not point to the vague ‘financial broker’ career he’d always talked about.

Her dad had finally told her the truth. He worked for an agency in the espionage industry for the United Kingdom.

Initially Skye hadn’t been able to help but feel the story was preposterous, a fabrication for who knew what reasons. She had pressed him, annoyed by his seemingly frivolous attitude. All too soon, random dots she’d never thought twice about had connected, until Skye’s eyes were opened to the full picture.

Her father was a spy.

Share what you thought about The Agency: Part One and earn reward points.