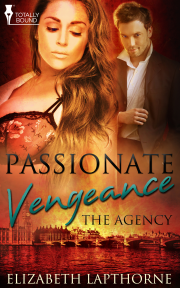 Book 4 in the The Agency series

After being rescued by new Agent Lucas Sloan, Abby seeks answers—and vengeance—for the unsanctioned medical testings performed upon her illegally.

Abigail Turner woke up from a nightmare only to find herself living in one. Discovering she had been unknowingly injected with an untested vaccine, then exposed to various diseases, she was the only living subject of a horrid trial. Rescued by a handsome hero, she struggles to come to terms with the depth of depravity she's been exposed to.

Lucas Sloane had felt the sensual pull of Abby since he'd first seen her photo. The woman and her situation had crawled deeply under his skin and he craved providing the strength that would help her get through her nightmares. Fiercely proud when she insists she help him with his mission to catch a multiple murderer, he swears to help her every step of the way.

Burning desire explodes between them and soon they are intimately connected. Racing against time to save even more people from the same disaster Abby had faced alone, they work together to hunt down the man responsible. Lucas knows that a part of Abigail just wants passionate vengeance, but how can he say no to her when she holds not only his heart, but also his soul?

"Impress me, George." Lucas Sloan pushed one hand down on the wiry tech’s shoulder and leaned in close.

George ran a hand through his messy brown hair and pushed it out of his eyes.

Lucas smirked and tried to read the man’s laptop screen over his shoulder.

"I thought Jones ordered you and Walters to take four hours down time before you showed your faces back here?" George complained, though there had been no real sting to his tone.

Lucas shrugged and pushed aside the oppressive feeling of worry and doom that had haunted him the last day or so.

"Keep your voice down, mate," Lucas snapped as he cast a quick look around to make sure no one had overheard him. "Preston did order Tristan and I to take a few hours’ rest before we hit this again. You announcing to the world I’m here will just get me in deep shit. So shut it, all right?"

"Everyone is hard at work helping you and your partner solve this case," George said with evident amusement. "While you and Tristan get your beauty sleep, we’re all back at the grindstone. No one will tattle on you for coming in an hour early. You got my message, I presume?"

"I couldn’t sleep," Lucas explained. He hesitated, searching George’s expression before continuing. "I don’t know if it’s because this is my first real case—not just with Tristan as my partner, but my first real mission—but it’s hit me hard, really got under my skin. This girl we’re searching for, Abigail Turner, you know she’s been injected with some sort of super-vaccine? Something that crazy Dr Harper and an ex-Manager of the Agency, Emma Henley cooked up to do heaven knows what with. They’ve injected her with it multiple times. All the other test subjects have died over the last six months and now she’s missing. How am I supposed to take ‘down time’ with all this going on?"

"Tristan Walters didn’t have much trouble with it," George teased him.

Lucas shook his head impatiently. "Don’t be fooled by that calm, suave demeanour of his," he warned. "He only went back to his flat to settle Kimber. She might appear all blonde curls and laughter behind that brilliant brain of hers, but she was exhausted, mentally and physically. Tristan has fallen hard for her and protecting Kimber comes naturally as breathing to him now. He left only so she could rest. Otherwise he’d be hiding out here trying to find this poor girl with me."

"Sounds to me like Tristan isn’t the only one falling around here," George chuckled.

Lucas narrowed his eyes, his heart pounding. Don’t be a fool, he insisted, George can’t possibly know about that dream you had when you nodded off in the car. Get a grip, Sloan!

"Don’t be ridiculous," Lucas snapped, more annoyed at the truth behind George’s words than his friend actually speaking the thought aloud. "I haven’t even met the girl yet, I can’t possibly have feelings for her. I sympathise with the shit she’s going through and want to help her. That’s it."

George threw him a sympathetic look. Lucas frowned, not sure he was pleased to have been baited into speaking so defensively. George remained thankfully silent, seeming to be happy to leave his teasing at that.

"I’ve only been here six months longer than you, mate," George changed the subject. "And take it from me, the first few cases are the ones that really grab you by the throat. Just a word of caution, if Jones or any of your superiors feel you’re getting in too deep you’ll be relegated to the mailroom. If they tell you to take a break, take it. If you’re ordered to back off something you better have a really good reason or irrefutable proof to support you if you go against orders. Old hands like Walters can get away with shit because they’ve earned their reputations and have brass balls. Everyone knows Walters and those like him are solid agents and if they break the rules it’s for a bloody good reason. Right now you’re not just a newbie but an unknown. Earn your rep and then play fast and loose with the rules."

Lucas nodded, knowing what George had said was nothing less than the truth, but something about this case had a hold on him. The vulnerability he could feel in these victims, Abigail Turner in particular, had crawled under his skin and wouldn’t leave him.

Before the meeting where Preston had ordered him, Kimber and Tristan to take a rest, George had shown him Abigail’s driver’s license and photo. Pale skin with green eyes and strawberry-blonde hair falling below her shoulders, she’d looked beautiful and haunted.

When Lucas had taken a brief nap in his car he’d dreamt of Abigail, lying crumpled on the ground, her hair covering her face as her slender body shook with sobs. She lay in a ring of fire calling out for help with the desperation only the truly needy could ever use.

He couldn’t go home and lie in his bed, pretending this was a regular case. Something urged him that time was of the essence, and he wasn’t used to denying his gut feelings. They’d been right far too often. He sighed and ran a hand through his hair, ignoring the way parts spiked up and others fell into his eyes.

Share what you thought about Passionate Vengeance and earn reward points.