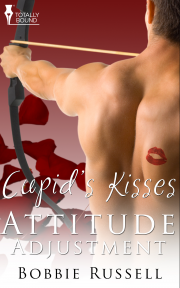 Lincoln Parish has an attitude. That's what got him in trouble and now he's doing community service time at an old ladies' retirement home. But the women there also have attitudes, and they floor him with their frank discussions of sex and questions about how firm his butt muscles are.

The one redeeming factor is the director, Suni Hart, especially when Linc discovers the beautiful young woman is also there for a reason. She has an unusual attitude toward sex. She likes it - a lot. And while she may be trying to keep her secret, the little old ladies know.

They make a point of causing problems that will throw the two young people together and Linc is more than happy to feed Suni's addiction as they explore the passion that grows rapidly between them.

“Five hundred hours of community service and suspension of your driver’s license until it’s done.” Judge Blackbird slammed the gavel down.

“Five hundred…?” Linc protested under his breath. “I wouldn’t have gotten caught if that damned old biddy hadn’t pulled out in front of me!”

His lawyer, Harvey, tugged on his arm, trying to shut him up.

“Old biddy, huh?” The judge looked down at him from behind thick spectacles. His gaze swung to the court reporter. “The Court retracts the sentence it just gave this young man.”

“Mr. Parrish, the older citizens of our community should be revered, not blasphemed. Your license is suspended and you now have one thousand continuous hours of community service. At the Aviary.”

He pounded the gavel. “Case closed.”

“This is a bird sanctuary?” Linc asked as his lawyer turned off the highway at Desert Springs and drove up and around the curved drive. Desert palms and a variety of flowering plants graced the front of a magnificent two-storied stucco house with tall white columns across the front. “I can hang out here for awhile. No sweat.” Harvey had explained that continuous service meant Linc had to stay there, but he had access to his cell phone and laptop, which were about all he needed to do his job.

“Get what? I only had a couple of drinks and was driving home minding my own business. I got a ticket because some old lady pulled out in front of me. Otherwise, the cops would never have checked my breath.”

“No, I mean about being here.”

Linc shrugged. “How hard will it be to watch a bunch of birds for a month or two?”

Harvey laughed. “You’re on your own, boy.” He tossed Linc’s duffle on the ground beside the car. “Remember, no driving, and you’re stuck here for the duration.”

“No problem. I’ve got it covered.” Linc picked up the duffle, slung his laptop strap over his shoulder and sauntered up the steps. “I can handle birds; it’s that old bat who caused my problem.”

He walked into a foyer larger than his entire condo in Ventura Beach. All this for a bunch of birds? He shook his head, thinking some old lady with too much money must have left it all to her parakeet when she’d died. He didn’t really have anything against old people. After all, he had a grandpa in a retirement home nearby, but shit… Money like this could buy a good quarterback for the Forty-Niners football team.

He bent over to look at a directory that was attached to the wall only about four feet off the floor. A hand slid across his butt, lingering where his legs met his crotch. He jerked upright, whirled around and then had to glance down to find the culprit.

“Nice firm butt. Betcha got a lot of muscle under there.” A hunched-shoulder, old lady, not more than four feet tall, grinned lewdly up at him.

“What are you doing?”

“Copping a feel. Don’t tell me you didn’t like it?”

“Oh sure. Every guy likes getting felt up by some ninety-year-old lady.”

“Seventy-three, and honey if I ain’t dead, I still got working parts.” Her gaze slid over him, stopping at his crotch.

“That’s really gross.” He quickly looked around the entry, trying to figure things out. “Why is this directory so low?”

“Have you noticed the residents? They’re either short, in wheel chairs, or hunched over with age. How do you expect us to see it up at your altitude?”

“Residents?” Linc asked, a horrible suspicion making its way to the front of his brain. “I didn’t know birds could read?”

The old lady snorted. “Birds? You must have been sent over by Judge Blackbird.”

She laughed outright, shaking her head. “Gotta give Blackbird credit. You’re not the first youngun who didn’t know where he was going. Welcome to the Aviary.” She swept her arm in an arc to encompass the entire place. “A sanctuary for old birds and biddies, like myself.” She continued laughing as she walked toward a door in the centre of the far wall. “I’m Florence – just call me Flo -- Campbell. Come on. I’ll take you to Suni.”

Stunned, Linc followed her through the door and across a large open area awash with light from the windows on both sides. An area to one side held a television, piano and a couple of love seats and overstuffed chairs. Pink and white crepe paper streamers draped the archways and doors, and red paper hearts were taped haphazardly on the walls. Acid churned in Linc’s stomach. Birds didn’t celebrate Valentine’s Day.

Grade A! Attitude Adjustment is a great read. It is a definite keeper on my shelf! Bobbie Russell is an author to keep your eye on, her stories are filled with interesting characters, sizzling sex...

Share what you thought about Attitude Adjustment and earn reward points.