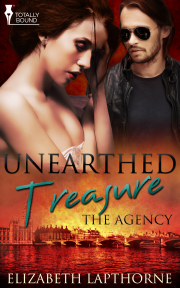 Book 6 in the The Agency series

Chelsea and David have been working a year and a half to stop a smuggling ring. While discovering the last link, they unearth a far greater treasure—that of each other's love.

Chelsea Atchison and David Greer have been working deep undercover for the last eighteen months to break a smuggling ring. Finally uncovering a workable lead they join the crew with the intention of helping them break into and steal from the National Gallery of London. What they hadn't expected to uncover was the simmering desire for one another.

With no one but each other to trust, surrounded on all sides by their enemy and even their beloved work place—The Agency—starts to doubt them. The trust Chelsea and David had built between themselves explodes passionately into much, much more.

Still, they need to focus on the big picture, discovering the shadowy boss that the smuggling crew is answerable to and bringing him and the others to justice. When that involves breaking every law in the book, what's one more—sexual intimacy between colleagues?

Chelsea Atchison cast a brief look at her partner as she swiped her security pass to open the 'Employee Only' door. David Greer lifted an unsteady hand and tugged a stray lock of his shoulder-length hair behind his ear, his face reflecting the same confusion and surprise she felt.

The lock beeped and she depressed the handle. Brushing her long, dark brown curls away from her face she hurried through the door. She held it open until David Greer also passed through.

He shut the door behind them, the lock snicking audibly.

Her heart hammered, though she tried not to outwardly betray her concern.

So far their plans had turned totally to shit.

"What the hell happened out there?" she asked with a vague wave at the enormous main foyer of the National Gallery of London—where they’d just left. "None of this was supposed to happen. It sounded like a rocket launcher went off, and damned if the whole front fa�ade of the building isn’t decimated. We’ve been planning for this afternoon for almost eighteen months, and now, mere hours from our goal, everything goes wrong."

"If by going wrong you mean half the city’s police force are now likely on their way, yes, I think it’s clear something is amiss," David replied.

Chelsea halted in the middle of the long corridor they had been hurrying through. Annoyed by the part sarcastic, part amused lilt to her partner’s tone she pressed her hands to her hips and glared at him.

Of medium height and lithe build, it was only when one looked into those warm brown, steady eyes that David’s intelligence and solid strength could be seen. Chelsea had trusted him from the moment she’d got a real, lasting look into his gaze. But it had been the sporadic flicker of a smile that helped soften his features. That, coupled with his lush, shoulder-length, medium brown hair got her heart pattering faster than usual.

David would never be a cover model, or sinfully handsome, but he more than revved her engines and set her breath racing from a casual glance.

"Don’t you take that tone with me. I played my part to the letter. I warned you that woman Jennifer was trouble the moment you told me she’d seen you bury the box with the spare security card and blueprints in it. Anyone would be curious after having seen that. I’m surprised it took so long for her and that Agency fellow Saul to put the pieces together."

"You agreed we should keep the London branch of the Agency out of this. I explained the situation to you. I never lied."

Chelsea sighed. She could just make out the sound of approaching sirens. They both kept walking, though more calmly now.

"I know. But we’ve come so far, we’re so close to hearing what the smugglers consider the main goal—Phase Two to their plan."

"We’ll get there," David insisted in a low tone. "If you want to back out, to call it quits—"

"Bite your tongue," she replied.

Chelsea turned her head to look over her shoulder at David. He watched her carefully, his dark brown eyes serious. She knew his lithe build was deceptive, he didn’t look anywhere near as physically strong as she knew he was. Brown hair fell in a soft curtain to graze his shoulders and frame his angular face. Normally she loved hearing him speak, the faint lilt of his accent reminding her of home and warmth—of comfort.

She reached out and surprised them both by taking his hand, threading their fingers together.

"We’re a team," she said firmly. "There is not a person on this planet more fierce or stubborn than the two of us. I know we’ve had our problems, particularly when we were first partnered for this mission. But over the last year and a half I’ve come to rely on your instincts, I listen to your judgements and we make all our decisions together. We’re partners. Equals. Unless you’re wanting to back out of this mission I don’t want to hear another word about giving up, especially not for something as insulting as you wanting to protect me."

"No one is more important to me than you," he said with a simple, brutal honesty. Chelsea smiled, certain there would be some joke or additional comment coming on the heels of his statement, but David simply watched her, seemingly waiting for her response. Her smile faded. She realised he meant the words exactly as he’d said them.

"David," she stammered, surprised, pleased, excited. A whirl of emotions grew inside her as she understood that the growing attraction she was feeling for this man was reciprocated. Heavy boots sounded from behind them.

They both turned to glance back, then simultaneously broke into a run.

"Damn it," Chelsea cursed. "This is not the fucking time. I just can’t catch a break with you, can I?"

"If it wasn’t this it would be something else," David replied with a wry grin. "The rest of the smuggling team, armed assault agents, something."

"This conversation isn’t over," she promised him. "But maybe we should get somewhere secure first."

I liked the chemistry and communication...The secondary characters were realistic. I was surprised at who the ringleader was and how it was revealed. The author did a good job explaining why things...

Share what you thought about Unearthed Treasure and earn reward points.