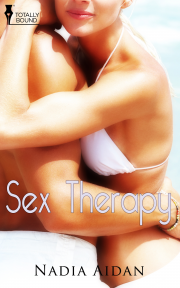 The good doctor may be the expert, but he proves himself the master, as he takes her on a sensual journey, filled with steamy, hot nights and plenty of sex therapy.

Dr. Elena Bouchere, an expert in women's sexuality, has just one tiny little secret, she's no expert! It's been two years since she's last had sex, which means most of her advice has nothing to do with personal experience, as she claims, and more to do with her own wild imagination.

And no one knows more about Elena's wild imagination than reporter Julien Bond, who just happens to be in possession of her very naughty, very explicit diary, which reveals all the sordid details of her fantasies, none of which she's ever brought to life. But Julien wants to rectify that, so he's made a list, and over the course of a weekend vacation at an exclusive fantasy resort, he begins each day with the promise of pleasure, and ends it with the fulfilment of one fantasy from Elena's diary, leaving her in anticipation of what he will do next.

The good doctor may be the expert, but Julien proves himself the master, as he takes Elena on a sensual journey, filled with steamy, hot nights and plenty of sex therapy.

Sex Therapy is a fun, sexy read with an interesting premise: a sex and kink therapist with little sexual experience, especially in the realm of kink...The chemistry is hot between the couple and their...

Share what you thought about Sex Therapy AUDIO and earn reward points.