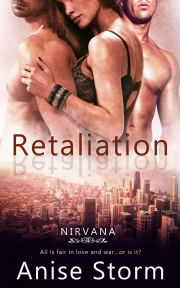 Secrets are exposed when two business rivals discover they have fallen for the same woman. All’s fair in love and war…or is it?

When past and present collide, Hannah Brinkley is torn in two romantic directions. By the time she realizes she isn’t the only thing at the center of the power struggle between two Dominants, accusations of corporate espionage threaten to rip her world apart. The possibility of prosecution is nothing compared to the realization that she’s lost the two loves of her life. Grappling with the emotional pain, she has nothing left to lose and sets out to clear both her name and her conscience.

Stung by a woman’s alleged betrayal, Finley Wetherall and Thaddeus Remington are determined to destroy one another, until they discover Hannah has put herself in grave danger. Now the two Dominants are in a race against time to determine whether they can actually put their own differences aside long enough to save her. If she’s rescued, will either man be able to walk away from her again? And, if not, will she be able to choose one over the other?

Resting her forehead against the cold window of the plane, Hannah Brinkley stared numbly through the glass. Since it was nighttime, there wasn’t much of a view, unless you counted darkness with specks of light while the airport workers readied the planes for takeoff. She didn’t, but it really wouldn’t have mattered if she had. Her mind was still racing with thoughts about her earlier encounter with Thaddeus Remington.

The tingling feeling of his lips on hers was still fresh in her mind from his possession of her mouth. There was a pain, deep and achy in her chest, as she’d walked away from him yet again. It hadn’t been any easier the second time around. In fact, it had hurt so much more this time because of where she was going and, more importantly, who she was going back to.

Hannah wasn’t sure exactly what she had with Finley Wetherall, but she realized that because she had responded to Thad’s kiss, it only complicated things further. At one time she had actually loved her former boss, but she’d eventually faced the realization that she was in love with a fairy tale and not the man himself. Right?

She shook her head. Hannah didn’t know if she could honestly say that with very much conviction. The truth of the matter was she had wanted to be his one and only, but Thaddeus was a bachelor and millionaire playboy. Even if the confession he’d made at the airport that one morning had been true, he would soon have grown bored with her. She understood it, even if he didn’t. It was one of the reasons she’d had to go.

Another was because she simply couldn’t commit to anyone. Hannah wanted to, but something inside her had shut down after her first engagement. It was though the wall she’d built to protect her heart was completely shatterproof. Not even Thaddeus or Finley could break through.

“Ugh,” she said under her breath. These situations she kept finding herself in were ones of her own making. Hannah understood that, yet she felt powerless to change it. It seemed as though she only saw what she wanted to see. Instead of fighting for what she wanted, she ran. Escape was the easiest self-preservation mechanism she had and one she used often.

It had happened that night after she’d left the Ritz-Carlton and found herself at the W Hotel in downtown Atlanta. It had been there she’d happened upon Finley Wetherall. While seeing him once again had brought back feelings that had lain dormant for years, it hadn’t been enough to throw away what she had been building with Thaddeus Remington.

But she’d done it, anyway.

Instead of fighting for Thaddeus after hearing about his supposed engagement with Carolina Winston, she had done the most natural thing for her—to run. Even though it had all happened a few months ago, right now it felt like it had taken place only yesterday. Leaving him standing there at the elevator a couple of hours earlier had broken her heart all over again. Just like she had the first time, she would have the entire flight across the Atlantic to pull herself together.

“Ladies and gentlemen, we are third in priority for takeoff and should depart in about five minutes. Flight attendants, prepare for departure, please,” came the booming sound of the pilot’s voice over the aircraft intercom.

A tear ran unchecked down her cheek while she continued staring into the darkness. In seven hours, she would be back in what had been her home for the past two months. She would also be back with the man she had betrayed. Finley!

She turned her thoughts away from Thaddeus and toward the one she had just left him for. God, the two men were alike in so many ways. Both were successful, ambitious and dominant. It was no wonder she found herself conflicted she thought about the two of them.

Just then, the plane started to move, and she watched the airport terminal begin to disappear from her view. It was official. Unlike the last time she had left Thaddeus, he hadn’t—and wouldn’t—be making any last-ditch appeals to convince her to stay. Why would he? He could have any women he desired, and she knew, deep down, she would never be enough for him. Besides, she’d rejected him again, whether he had been sincere or not regarding his true emotions, and it had more than likely been the final dagger in whatever they might’ve had.

It was for the best. Hannah had settled into her life in London with Finley, a man who she believed—beyond a shadow of a doubt—cared about her. He always had, too. Since the night they’d met, he had never been anything less than a friend to her. And how do I repay that? By falling into another man’s arms.

It was more complicated than that, but it still felt the same. Is it possible to have feelings for two men at the same time? The answer to that question was clear in her confusion. Or maybe she was simply one of those sexual deviants the sisters at Prince of Peace had warned the students about all those years ago in school.

Either way, Hannah was wrong. She hadn’t told Thaddeus there was another man and she had no idea how to tell Finley she had kissed someone else, either. Maybe this was all a bad dream, and she would wake up feeling shaken, yet relieved. Or, knowing her luck, she might wake up to learn she had done more than just kiss Thaddeus during their recent surprise encounter.

Wherever her thoughts were headed, an announcement once again interrupted them, and, this time, it was much more welcome.

“Ladies and gentlemen, the captain has turned off the ’fasten seat belt’ sign, and you may now move around the cabin. However, we always recommend you keep your seat belt fastened while you’re seated. In a few moments, the flight attendants will be passing through the cabin to offer you hot or cold drinks and a snack. Alcoholic beverages are available at a nominal charge. Also, we will be showing you our video presentation. Now, sit back, relax and enjoy the flight. Thank you.”

Enjoy the flight? Not likely. It would be a long one and that the best thing to do would be to sleep, but she was still too emotionally wound up to do so. It was also better to wait on the flight attendant, so if she was actually able to succeed in dozing off, she wouldn’t be woken up. Luckily, her seat was located toward the front of the plane.

“Would you like any refreshments, miss? Water? Coffee? Soda?” the young woman asked as she stopped her rolling cart.

Hannah’s first thought was to say no, but then she decided maybe something strong would help her relax for the duration of the flight. “I’ll take a Jack and Coke,” Hannah told her, then grabbed her purse from near her feet. She fished around in it for her ID and credit card, finally handing them to the flight attendant. She wasn’t much of a drinker most days, but her current mood called for something stronger than coffee or soda.

Once her purchase was complete, the attendant handed her a glass of ice, a shot bottle of Jack Daniel’s and a can of Coca-Cola. Hannah removed the top then swallowed the liquor in the small bottle before setting it inside the pouch on the seat in front of her. With any luck, the alcohol would put her to sleep, because when she got back to London, she would have to make some decisions.

Anise Storm is a USA Today Bestselling author of Contemporary and Dark Romance. A Southern transplant, Anise is married with children. She has a love of football, shoes, and tall, dark heroes. When not spending time with family or traveling, she can be found either curled up with a good book or writing.

Retaliation was a great 5 star read and the final book in the Nirvana trilogy...I like how everything came together in the end and all secrets were revealed and questions were answered. I will defin...

Share what you thought about Retaliation and earn reward points.