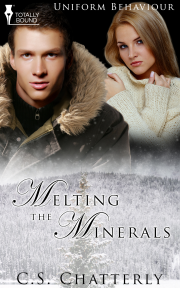 Book 2 in the Uniform Behaviour series

A Royal Canadian Mounted Police sergeant and a Geopaleontologist find a way to keep warm on a long winter night.

Devin Wallace made one of the worst mistakes of her life when she decided to head north before an oncoming blizzard. It was either travel with the risk, or give up the once-in-a-lifetime job opportunity working as a Geopaleontologist. But her reckless action almost costs her life.

If not for RCMP sergeant, Tray MacKenzie, Devin would have been an icicle afterthought. As it is, the two of them are stuck in Tray's cabin with nothing but his rock collection to keep them warm. Seems a piece of rose quartz can go a long way toward heating up the night…if applied properly…

Publisher's Note: This book has been released previously. It has been revised and re-edited for release with Totally Bound Publishing.

Devin Wallace checked the map for the third time. She was surely on the right road, but the time she’d wasted getting here could cost her. She tried the engine again, but the ten-year-old pickup truck wasn’t going anywhere. She looked out the windshield, saw snow falling even harder than it had been ten minutes earlier and smacked the steering wheel with the palms of both hands.

“Son-of-a-bitch!” she muttered, then struck the dash with her balled fist.

She contemplated walking, but leaving the safety of her truck would be fifty times more stupid than the decision to drive north in front of a blizzard. If she stayed, someone might find her.

She hoped she wouldn’t freeze to death if she kept her head. But the decision to come north so suddenly was almost obsessive. She'd had to take the chance.

After grabbing her overnight bag from the seat beside her, Devin began to search through the contents. One bottle of water, a chocolate bar, two apples and a small bag of peanuts were her only food. Her nightgown, one pair of jeans, one pair of socks and one pair of underwear were the only other contents aside from her small makeup bag. Everything warmer was locked in the back of the truck along with her equipment. She’d have to get out of the truck to get to it, and that would let the cold in and the warmth out.

The clothing she wore was warm, so far. She thanked God for the hundredth time that she’d hastily invested in good winter gear for the trip. But there wasn’t anything on Earth that could fight off the low temperatures promised by the weather forecasters.

“What was I thinking?” she uttered, and stared at the thickening wall of white in front of the truck.

There was nothing to do but wait, hope someone would check the road for travellers, and pray. But the highway into Cedar Ridge, Saskatchewan, wasn’t a major route and she was pretty sure no one else was foolish enough to be driving around under these conditions.

She took off her wire-rimmed glasses, rubbed her eyes and quickly laid the glasses on the dash. There was no sense wearing something to help her see better when the world presented nothing but blinding snow. As the snow fell harder, waiting proved to be a test of her patience.

The temperatures plummeted and the long minutes sitting left her time to reflect on the foolishness of her actions. She had known better. It wasn’t in her nature to take chances, but this time she had. Her friends called her “Deliberate Devin” for a reason. She based all her actions on rational thought processes honed from years of scientific study. But all that intelligent reasoning seemed to have fled in the face of the obsession she felt to get north.

One hour and twenty minutes later, Devin was on the verge of panic. The inside temperature of the truck had dropped considerably, the snow quickly piled up, and she was fairly certain it had reached the bottom of the driver’s side running board.

She considered getting out after all and looking at the engine, but even if she could figure out what was wrong she’d lose what little heat her body provided in the cab. She pulled her knitted cap lower, lifted the hood of her parka, and wrapped her gloved hands around her shoulders.

Along with the other stupid acts she had mentally listed was precipitously cutting off her cell phone provider. She planned on getting a new one once she arrived in Cedar Ridge, one that wasn’t quite so expensive. Now, she’d give that chocolate bar in her overnight bag for phone service.

But that could be carved into her tombstone along with the dozen or so other mistakes she’d made.

No extra food, no warmer clothing readily available, failing to have her truck checked, neglecting her cell phone capabilities...the list went on.

Given her uncharacteristic lack of common sense, she found it incredible that she’d been awarded a Ph.D. But the chance to come north and make a new life for herself had clouded her senses. Now, she’d pay for not thinking.

And there was only one person on Earth who would care.

Too late, she remembered that her uncle didn’t even know where she was.

Grade A! WOOHOO boy, all I can say is that if the first two books in this series are as hot as Melting the Minerals, I am getting a whole new appreciation for men in uniform.

Share what you thought about Melting the Minerals and earn reward points.

Other books in the Uniform Behaviour seriesView Series Page