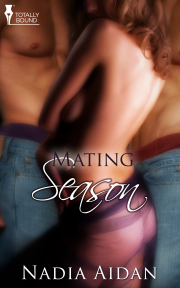 Two master vampires, one werewolf in heat, and the primal spell of the full moon—it's definitely mating season.

Detective Collette Talbot is happily overworked and up to her knees in cases. With the busy life she leads, she doesn't have the time or energy to find a mate and settle down to have his pups. But with her mating season just a week away she may not have any choice because when she goes into heat every lycan within a mile of her will be at her door. Good thing she has two sexy candidates in mind that would be perfect to help her out with her little problem.

Two master vampires, one werewolf in heat, and the primal spell of the full moon - it's definitely mating season.

Publisher's Note: This story was released as part of the Caught in the Middle Anthology by Totally Bound Publishing.

Mating Season is a sexy story with a thread of humor that I found a total delight. A new book for my keeper shelf for sure.

A Reviewer Top Pick! Mating Season is one of the hottest books I have read this year; it keeps you riveted to your seat and gives you need of something cold to drink to cool you down.

Share what you thought about Mating Season AUDIO and earn reward points.