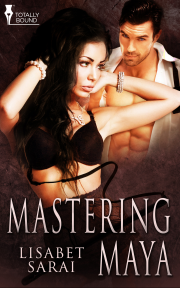 Behind the mask of control hides a spirit aching to surrender.

Mistress Maya bears the nickname 'The Ice Queen'. Her precision in administering discipline, her skill in evoking a submissive's devotion, and her unshakable self-control are legendary in the small but active Boston kink community.

From the moment newcomer Master Shark sees Maya flogging a sub at Club Inferno, he's obsessed with her beauty and power. He'd determined to break through her defenses and bring her the same release she grants to the lucky slaves she tops. When Maya dismisses Shark as young and inexperienced, he offers her a challenge—a night together, during which he'll show her what it means to be mastered. If he fails to bring her to new heights of sensation, he agrees to become her slave.

The crack of the Domme’s single-tail whip punctuated Stephen’s question. Raven hair cascaded to her waist, swinging in time with the steady strokes she layered on her bound victim’s naked back. She danced around the flogging bench like a ballerina, bringing the leather thong down on the still-unmarked areas of skin with astonishing grace and precision. The brawny blond man stretched lengthwise along the padded trestle jerked each time the whip found its mark. The sub’s gag effectively muffled any vocal reaction, but Stephen had a clear view of his engorged cock poking through the hole in the bench. Pre-cum slicked the shaft. Meanwhile, the blond’s buttocks clenched around the plug embedded in his anus each time the Domme’s lash struck. Obviously, the sub was enjoying the woman’s expert beating.

It was the woman who held Stephen’s attention, though. Her simple, severe outfit—a white crêpe blouse, narrow navy skirt and broad belt—highlighted her lush curves. The half-buttoned top revealed the shadowed valley between her breasts. As she travelled from one side of the bench to the other, seeking the optimal angle for her next stroke, he noticed the slit in her skirt, facilitating her movements but also offering glimpses of creamy thigh.

His own cock swelled in his tight leather trousers, but not because of her extraordinary body. Stephen-Master Shark, as he was called by others in the lifestyle-had known many beautiful women, in the most intimate of senses. No, her face—her expression—was what transfixed him, making his balls ache and his palms itch to stroke and slap that ripe flesh. She wore a look of utter calm and total concentration, even as she brought the lash down with increasing ferocity. Only her eyes betrayed her excitement. As she applied the whip to the submissive’s reddening backside, she did not smile. He saw none of the manic glee he felt when administering a flogging. Her self-control was absolute.

"The Ice Queen," his friend Tom-Master Thomas-replied to his almost-forgotten question. "Amazing, isn’t she?"

The woman paused to murmur in the sub’s ear and gently knead his crimson butt. The blond shook his head, clearly indicating that he wanted more. For the first time, her lovely mouth curved into the ghost of a smile. Stationing herself where the sub could see her, she unfastened her blouse one slow button at a time and slipped it off her shoulders. Now Stephen could see the rise and fall of her breathing—so her exertion had taken some toll, at least—and the dark nipples peeking through her white lace bra. The Domme was aroused after all, despite her impassive demeanour.

Her mini-striptease had the desired effect. The naked yearning in the shackled man’s face made Stephen grin. His own imprisoned erection throbbed, mirroring the sub’s urgency.

"No, no, that’s just her nickname. No one would dare call Maya that to her face. But you can see where it comes from."

Stephen inclined his head in silent assent, watching as the kinky scene continued to unfold.

The black-maned beauty stepped closer to her bound victim and fondled his cock. The man writhed against the padded horse. "You’re such a pain slut, James. I imagine you want me to use the cane now, don’t you?" Her voice was a low alto, smooth and warm as single-malt Scotch.

The man’s straw-coloured locks fell into his eyes as he gave a vigorous nod. She swept them back from his brow and captured his gaze. "Are you certain you can take it?"

Another nod. Stephen realised he was holding his breath. He forced himself to exhale.

"Very well. You do know better than to come, correct? You wouldn’t want to make me angry."

Mastering Maya is a short story filled with emotions, character depth. Stephen and Maya are good for each other, he's kind, gentle and understanding. I liked his energy and determination a...

Share what you thought about Mastering Maya and earn reward points.