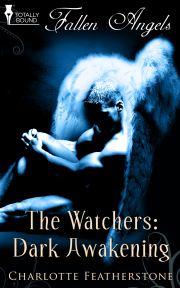 Book 1 in the The Watchers series

Heavenly bad boys…these aren't the angels they taught you about in Sunday School!

Gadriel is a Watcher—and a Fallen Angel. The Angel of War. Cast out of Heaven for hating humans, and for failing to bow before them, he's come to Earth to enact his vengeance upon his brothers, and an unsuspecting mortal. When a human woman enters his life, events are set in motion that neither of them can stop.

For, unknown to the humans, there is a war in Heaven, a war between the faithful and the fallen that has been locked in stalemate for centuries. Gadriel alone has the power to change the tides—for either side. But does he want it? Can his desire for this human run deeper than physical lust, or has he truly fallen beyond redemption?

At last, he’d found her. This was the woman’s apartment. He felt her, smelt the disease that was eating away at her. This was the one—this human female—who they sought to protect. She was part of a greater plan, a plan he was not yet privy to. But he would discover it, and when he did, he would enact his vengeance upon those whom he had once called brothers.

His boots made no noise on the carpeted floor as he made his way to the female’s bedroom. Despite the fact it was only early evening, she would be in her room, able to do little more than sleep and eat while waiting for the Angel of Death to come and claim her. Humans...they were so weak, so fallible. How was it possible that legions of his kind had fallen for the pleasures of human flesh? He hated humans and the power they’d been given. Despised how they had been raised above him and his kind. How could the creator ask them to bow before such creatures? How could He love them—the humans—more than him and his brothers?

Before the humans, He had loved them best. Now, he and his kind had been replaced. Discarded and tossed aside; forced to protect and guide and revere the creatures He had made out of clay.

What made the humans so damn special—and this one in particular? She was dying. She could not be a part of God’s plan to oust the Fallen from Heaven and end the war—the war between the faithful and the fallen—that had been locked for centuries in a stalemate.

But, if she was useless to either side—faithful or fallen—why had Sariel come to Earth and searched her out? No, there was a reason that Sariel, a devout and dutiful angel, had been sent to seek out this particular female.

The bedroom door was already ajar. He shoved it open with the tip of his boot, pausing on the threshold, his gaze taking in everything, from the walls that were bathed orange from the reflection of the setting sun to the white curtains that billowed and snapped in the wind as it blew through the opened window. Outside, the distant sounds of police sirens and gun fire echoed amongst the tall buildings. Shouts and screams and more gunfire rippled through the evening skies.

The sun had not even set, and already the mortals were killing each other.

“Mary,” he called, stepping deeper into the room. When there was no reply, he snarled and tore the comforter from the bed. She was not cowering beneath it. Looking about the room, he sniffed at the air, smelling beyond the disease that was wracking her body, to the scent of her floral perfume. Perfume that had been sprayed not long ago.

She was not there. Fuck. Had Sariel already beaten him to the female? The phone rang and his head snapped in the direction of the nightstand as he glared at the answering machine with its red blinking light. On the fourth ring the machine picked up and a soft, frail voice spoke in the darkness.

“Hi, you’ve reached Mary Murphy, leave a message at the sound of the beep, and I’ll get back to you as soon as I can.”

The machine beeped and a breath whispered across the speaker. No voice or words came, only the soft, steady rhythm of air being drawn in and out. Sariel.

The machine buzzed and the line went dead. He walked over to it and picked up the black square box, examining it from all angles. Hitting a button, he smiled in triumph when a robotic voice stated flatly, ‘you have three new messages. First message, Thursday; 6:10 pm.’

“Hi Mary, it’s Jane from Dr. Archer’s office. We just got the results of your last MRI. Dr. Archer asked me to call you to set up an appointment to talk about treatments. Call me back as soon as you get this message.”

He pressed a circular button and heard, ‘message has been deleted’. Mary Murphy wasn’t going to need that appointment.

“Hey, Mary, it’s Nadira. Where are you? I’ve been trying to call you all day. I thought we could meet at Langdon Park. You know, take a stroll along the paths.

I’ll meet you there at eight, and we’ll watch the sun set. Meet me at my favourite statue and I’ll buy you a cup of tea. Be there, Mary.”

He glared at the machine. The woman’s voice made his nerves taut. There was something about the hypnotic quality of her voice. He played the message again, not because he didn’t already have the information memorised, but because he wanted to hear the woman’s voice.

Look at me there, writing diligently by candlelight! While this may be just an image, it's pretty darn close to the real me. Well…except the hair…

I'm a Cannuck, born and raised in the ?banana belt' of Canada, which is Southern Ontario. But don't let the nickname fool you, we can still have snow here for Thanksgiving (early October in Canada) as well as hunting for Easter eggs through the white stuff in April!

In truth, though, I'm a total Anglophile! I love England—so much so—that my new contemporary series is set there, just so I have an excuse to go back to London to do research. Now, of course, I have another excuse, a fabulous UK publisher! My husband cannot grumble about the expense of a trip now. Not when he knows the value of research and good publisher/author relations!

As far as writing goes, I have wanted to be an author since about the age of nine, after reading A Witch from Blackbird Pond. I can honestly say that after reading that book, I knew I wanted to create stories that people would want to hear and love as much as I loved that book. That book changed my life and shaped my destiny.

I've always been a daydreamer and spent many an hour up in my room lounging on my bed, listening to music (it was the Cult and The Cure and those dreamy guys from Duran Duran in those days). I idled away the hours, lost in the music and my imagination. Not surprisingly, it was always romantic images and stories whirling through my mind. And also not surprisingly, music is still a huge influence and inspiration in my writing.

I put off my dream of writing to get a ?real' job. So I trudged off to university and became a nurse. Nursing pays the bills, writing feeds my soul. One day, maybe it'll do both!

...DARK AWAKENING is a pure gem of an introduction into Ms. Featherstone's The Watchers series...It is an action packed sensual ride with some of the sexiest angels to date.

Share what you thought about Dark Awakening and earn reward points.

Other books in the The Watchers seriesView Series Page