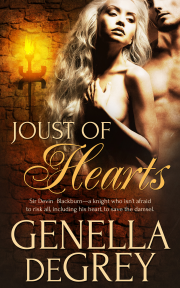 The tale of widow Lady Melisande Dupree and Sir Devin Blackburn—a knight who isn’t afraid to risk all, including his heart, to save the damsel.

With her time of mourning long since past, Lady Melisande Dupree remains quite happily ensconced in her stronghold, away from the outside world. Owing to the many narratives of battles and bloodshed by her deceased husband, she has an abhorrence for violence in any form. When she receives a request to share her talents of voice and instrument with friends of the late Sir Marcus, she accepts without considering what may come—and now it is time to pay the price.

Sir Devin Blackburn is cherished as a member of the Bergavny family. At the opening of the games he first sees the golden-haired lady-bard, and is simply enchanted. However, he recognizes her alarm during the mock skirmishes, and it is clear to Devin that if he wants to win her, he will have to proceed with caution about his knighthood. Finally, moments after he tenderly introduces her to his profession, he gets word that his ally’s holdings are being invaded by loyal Yorkist enthusiasts.

Ashamed of herself for the wanton way in which she behaved with the knight, Melisande accepts an extended summons through the Bergavnys from King Henry .

Corin Sinclair is nephew to the Queen and is a consummate seducer. He works his magic on Melisande, all the while knowing that if he wins the fair Melisande, he wins her castle too, bringing him one step closer to the throne.

To the Lady Melisande Dupree

Concerning the games at Willowbrook.

Please attend and bestow upon us your talents

of voice and instrument

at our day and evening festivities to be held

in the year of our Lord fifteen hundred and one.

The Lord and Lady Bergavny.

“Our lady is indeed vexed this day.”

Melisande disregarded her maid’s impertinent comment as she sat on the opposite side of the solar by the west window plying needle and thread. Maggie and Tilly were two of the most loquacious chits, likely in the whole of England, but she’d learned to pay their discourse little heed. Well, most of the time. They’d been assigned to her upon her marriage and had been her only source as to the goings-on inside the walls of Dupree Castle. Maggie with her wide blue gaze, always the first to bring gossip to her confidante, Tilly. Tilly, with her catlike curiosity and almond-shaped brown eyes, would soak up every word and later confirm the information. Whatever pastime kept them interested in life and no matter what inspired their activities, they were infallibly loyal to Melisande.

“Think you she will change her mind and not want to go to the Willowbrook games?” Maggie beseeched Tilly in hushed tones.

“Nay. Not whilst I have a breath in my body. We have not been farther than the village in an age, and I can no longer abide the stale geldings in Dupree’s stables.”

Maggie elbowed Tilly in the ribs with a grin.

“Your words, however softly dispensed, do not go unheard past my ears, you know,” Melisande admonished her maids, albeit gently.

“Aye, m’lady,” they murmured in unison, dipping their matching white barbette-covered heads in submission. They continued to talk amongst themselves, but their volume had lowered considerably for the time being.

Since the first of the previous month, Melisande felt as if she had made a pact with the piper and it was time to pay. She had responded with word of her plans to attend—an act she now found sorely regrettable. Though it had been over a year, she still did not feel ready to face the friends and fellow knights who had fought alongside her late husband.

Nevertheless, because she had responded positively, she should attend. ’Twould be discourteous if I changed my mind and refused at such a late date.

“One of the miller’s sons let it slip that Hamish asked you to take a walk with him tonight,” Maggie commented to Tilly. “Didn’t you used to see him regularly?”

“Aye, but I haven’t yet decided to give him my favor.”

Tilly shrugged a shoulder. “He’s the one who broke with me last spring. Now that he’s made his way round the village he’s back, sniffing up my skirts.”

“What a lout. And so many like him hereabouts, too. He’s a robust lout, but a lout to be sure.”

“We will see what the evening brings. I’ve a mind to change my decision plenty—nine times between now and then.”

Ah, to be fickle and free, Melisande mused as she half-listened to their freshly audible banter. However, her station wouldn’t permit such frivolities.

Indeed, she was a bundle of contradictions, she admitted to herself. It seemed that none of the people of Dupree had set out beyond the walls of her late husband’s stronghold since he had passed away, save the game hunters and those who tilled the earth and tended the crops.

She’d oft wondered how she could ever venture forth without a destination to entice her. Where would she go, to visit her parents? Never.

“Have I revealed that it has come to me of late, the tale of William, the blacksmith’s son?”

“Maggie, you are some kind of friend who would keep such tasty bits from me! What have you heard?”

Melisande shifted upon her embroidery stool and stabbed her needle into the little handkerchief she was working on. Even to this day, it infuriated her when she thought about her parents and what they’d done. Without blinking an eye, they had bartered away their only daughter of ten and six years to the elderly Sir Liam Dupree. She had not even blanched when she found out that Sir Liam’s age went well beyond her own father’s. After all, she had been prepared all her life to marry into land and wealth—for that, she was told, was the making of a good match.

“You are familiar with William—and he is handsome to be sure. But when a diligent farmer’s daughter sought his company, and beautiful I hear she was, he shunned her.”

“Aye. He promptly took up with some strumpet, who, from what has been told to me, wasn’t at all pleasing to look upon, but would agree to a toss in the hay as quick as you please.”

“I’ve heard of this poxy wench, before. S’wounds, my ears hear but my heart, it seems, wishes to deny!”

“Indeed.” Maggie nodded. “The man must have no control over his cock whatsoever to be planting seeds in such odious territory, when instead he could have had such a prize.”

As Maggie and Tilly chatted between themselves, she paused in pulling her thread through her embroidery hoop when she recalled how eager her parents had seemed to be rid of her. Pinching the needle between her fingers, she pushed it through the fabric once again and a soft growl emitted from her throat.

She caught Maggie’s and Tilly’s concerned expressions via a single glance their way, but Melisande refused to feel shame for displaying her emotions so.

“So, after the light skirt ran off with someone else who’d struck her fickle fancy, William set off to find the farmer’s daughter and try to rekindle her ardor.”

“All for naught, I’m afraid. ’Twas too late. He’d already broken the farmer’s daughter’s heart and she would have none of him, nor his apology.”

“Serves him right that he shouldn’t get the beautiful, well-to-do, smart girl, but have to settle for a lonely bed. I abhor men who think they can sample every girl in the shire, only to decide later on which to take to wife.”

“Leaves every last one of us dismayed.”

Melisande shook her head. What’s done is done—to all of us, I suppose. And we have naught to say about it. The fact of the matter was that Sir Liam had paid for her hand instead of requiring a dowry. Sold, to the lecherous, violent Sir Liam—by her own parents. That had served to sour her taste for ever seeing her relations again. Shaking off the familiar feelings of pain and guilt, she continued with her task.

Share what you thought about Joust of Hearts PRINT and earn reward points.