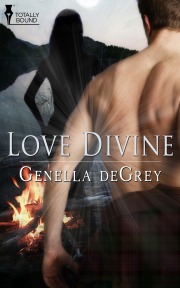 In the Highlands of Britannia, a Druid beauty and a reformed rogue-turned-missionary of the new Roman religion find salvation in each other.

In the Highlands of Britannia, Aslyn, was raised a Druid by her late mother. Rome has returned, but instead of a legion of solders, a single man comes to the little village of Cardamon Long, peddling a new Roman god.

Ryus Jorian was sent on a mission for the new religion. But instead of a cave of barbaric souls in need of saving, he finds an intelligent, beautiful, hedonistic distraction, who makes him question the very reason for his journey.

Aslyn stood in the centre of Ardwinna, the sacred forest, wringing her hands to stop the shaking. The man who awaited an audience with her wished to speak about religion.

“He is tall, my lady—broad of shoulder and exceptionally handsome,” Shana said, then lowered her voice to almost a whisper. “He has the look of a warrior rather than a priest, if truth be told.”

Peddling Gods and bearing a fine appearance. A lethal combination, to be sure. She groaned inwardly. “Bid the missionary come to me,” Aslyn replied, dismissing the young lass who had waited for her reply, and a reaction to the bit of gossip. The latter of the two Aslyn purposefully left unobserved, much to Shana’s disappointment Aslyn was certain. She shook her head at the chin-wagging which never rested in the small village of Cardamon Long.

Aslyn turned her back to the entrance to Ardwinna, from where this handsome missionary would emerge at any moment, and took a calming breath. Had a Roman legion found out her tiny village still embraced the old ways, the Goddess, the earth, the moon? Or did they come unawares, to secure their Gods Jupiter, Apollo, Diana, Venus, Mars, and a handful of others she could not recall at the moment. Perhaps they came to introduce new Gods.

She smoothed a hand over her worried brow. This would mark the second visit from Rome within the last twenty years or so. The Romans had intimidated and prodded until the people of Cardamon Long included their new Gods. However, when the soldiers departed, they went back to worshiping the Goddess. Aslyn had been only six years old at the time, but remembered it well. To her, whom or what Cardamon Long chose to worship was their business, not Rome’s. But that represented only the top of the woodpile.

Unlike her late mother, lady Eymed, Priestess of Cardamon Long, the only gift Aslyn had been given was a bit of the second sight. But regardless, all elements needed to be perfectly aligned to attain any sort of connection. Aslyn had not been given any signs by the Goddess that she should take her mother’s place. ’Twas a fact she had shared with the people of the village many times since, and a small detail they persistently omitted from everyday conversation. At each and every special occasion, as well as some not so formal events, they referred to her as ‘The Lady.’ And it irked her so.

Besides not being ‘The Lady,’ she did not have the time to deal with this missionary. She had her own preparations to make for her private celebration at her personal altar near Loughery creek.

“Ardwinna?” a male voice called from behind Aslyn.

Aslyn had to stop herself from laughing aloud at the mistake.

He continued. “I come in the name of Bishop Folious, and Jesus—”

Still smiling, she turned to him.

“Christ.” The single word issued from between his lips in an expelled breath.

A prickling sensation crawled along her back and arms at the sight of him. If anyone deserved to be called a deity, ’twas the man before her. Shana’s report had indeed been accurate. This man must have been blessed by the Goddess. The ends of his brown hair brushed the tops of his ample shoulders, but upon further inspection, the fingers of the Goddess must have run through the sleek strands— there were thick yellow-gold streaks throughout.

Aslyn watched his confident expression melt into a young boy’s slack-jawed stare. She found it strange how his newly softened gaze conflicted with his intimidating size. He had a warrior’s bearing to be sure, but the way in which he looked at her seemed to warm the very air around her. Goddess, but he struck a fine figure. He appeared to be a man who could take care of his family—hunting, providing shelter—she certainly wouldn’t mind being the one he hunted. Her grin widened. She hoped he didn’t think she was laughing at him, but even still, her ribald humour threatened to bubble up and overflow like the spring’s rising at Imbolc.

“Ardwinna is the name of a Goddess,” she corrected gently, “as well as the name of the wooded sanctuary in which you now stand.” She sobered some, her smile not quite as explicit. “I am Aslyn of Cardamon Long.” She nodded in greeting.

I thought how Ms. deGrey had Ryus trying to explain that not all Christians were the same evildoers by comparing Druid rituals was brilliantly done. The passion that these two characters feel for each...

Share what you thought about Love Divine and earn reward points.