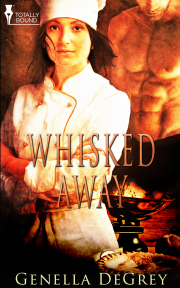 In 1892, just outside Barbizon, France, Virginia Clark tucks away her scandalously wanton ways to become a chef, but her girlhood sweetheart turned assistant, Rory Hughson, has other plans.

Virginia 'Ginny' Clark has not only learned her academic lessons, thanks to the generosity of her guardians Luke and Beatrice Hughson, but she's reined in her girlhood curiosity about boys—a curiosity that just about got her sent to the nearest nunnery back in the summer of 1880. Now a promising pastry chef, Virginia, upon graduation from the premier cooking school in New York, has been chosen for a summer—long job at a private house party in Barbizon, France. This opportunity is a dream come true for her, until her childhood sweetheart throws a dirty fork into her custard.

Years have gone by and much to his chagrin, Rory Hughson, Ginny's willing accomplice in the notorious carriage incident of 1880, still feels protective of his first love. Rory's brother, Ace, and his wife, Beatrice, can't possibly allow Ginny to traipse off to France unchaperoned—and more importantly, end up tossed into a house full of randy French artists!

Thankfully, Ace and Beatrice agree—but when Ginny slips away from the chaperone they've arranged for her, Rory sees no option but to follow.

Virginia isn't happy, but soon things start to heat—up in the kitchen—or more accurately in the drawing room of a luxurious French chateau during a portrait painting.

Complications arise and cakes fall during the summer's escapade—get ready to be Whisked Away.

Reader Advisory: This book contains a scene of dubious consent involving three men and one woman.

Publisher's Note: This book is a sequel to A Touch of Destiny.

Rory Hughson’s temper seethed. “I know these artistic types—rakes, rogues and seducers of women, all. Tell her, Ace. Tell her she cannot go through with this nonsensical scheme.”

Virginia had never seen him like this. Then again, she hadn’t seen him in a dozen years or so. Oh, yes, he was still quite handsome with his full head of dark blond hair that she wanted to plunge her fingers into and smooth down his neck, but at the moment, she wouldn’t get within arm’s distance of that six-foot-tall broiling oven. “Beatrice, please tell your brother-in-law he is not my mother.”

“Of course I’m not your mother,” he snapped before Beatrice could speak. “But since she’s three thousand miles away in Tombstone, someone has to rein in the wild filly.”

Now he was starting to get personal, and that wouldn’t do at all. “Wild filly?” Virginia spun to face the guardian of her youth. “Have I not been the very picture of respectability since I came to live with you and Luke?”

Before either Beatrice or ‘Ace’, as Rory called his older brother Luke, could answer, Rory voiced his opinion. “Miss Clark, you are still going to need a suitable companion.”

Oh, if I could just reach him, I’d choke him like a chicken. “For your information, Mr Hughson, pastry chefs do not go about their kitchens with chaperones!”

Rory folded his arms over his chest in a blatant display of annoyance. “Ace, perhaps you should have Beatrice accompany her. It would behove you both to keep this young miss out of trouble.”

A breath of air hit the back of Ginny’s throat like a bubble beaten from a lump of dough. Her thoughts skittered about. She was beyond shocked that Rory would even suggest that she would attract any sort of conflict…her, a woman who’d just achieved something few other females of her meagre means had ever dreamed of— “Out of trouble? Why, I never—”

The twit, Rory, had the audacity to interrupt her with a condescending chuckle. “Never? I seem to recall a certain carriage ride from Tombstone to Tucson—”

Beatrice Hughson glanced up at her husband from the elegant green silk brocade settee. “May Ginny and I have a moment, darling?” At his nod Beatrice rose, and with an air of grace she floated into the next room. Virginia, too irritated to follow Beatrice’s lady-like example, stomped past the brothers Hughson and slammed the door behind her.

Virginia plopped down onto the nearest chaise. Beatrice was the only person whom she allowed to call her by her childhood nickname.

Beatrice sat on the matching wing-back chair opposite her and arranged her skirts about her as if they were about to have a tea party, not discuss Virginia’s controversial summer plans.

“I didn’t get to tell you how lovely you looked at your commencement ceremony today,” Beatrice said, still not making eye contact with her. “Your mother would have been proud, had she the means to journey across the country.”

“Thank you,” she said with sincerity. Virginia had kept in contact with her mother via the post, but Mrs Clark seemed content to remain out west. “It was very kind of you to travel up from Virginia. I can’t tell you how happy I was to see you among the assembled.” She loved Beatrice. If it hadn’t been for her, she wouldn’t have had the advantage of such a thorough education. She’d probably still be stuck in that hole-in-the-desert, sharing a classroom with a few miners’ children of various ages. Virginia was overjoyed she’d spent her more formative years with the Hughsons. The sun hadn’t set on a single day since she’d arrived when Virginia didn’t thank the stars above that Beatrice and Luke had looked the other way after she’d stowed away, unchaperoned with Rory to Tucson. Well, mostly looked the other way. She understood now that a tiny indiscretion like that could ruin one’s chance of…well, anything.

Beatrice folded her hands in her lap. “Now, you must admit, spending an entire summer in France with total strangers is rather an odd thing to do for a woman—a woman with legitimate social and familial connections here in the States.”

Share what you thought about Whisked Away and earn reward points.