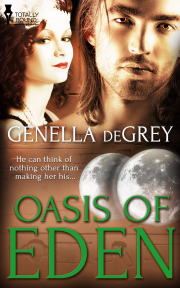 Heiress to the fortune of a world-renowned archeologist, Miss Jaden Poole accidentally defies time and space and stumbles upon the man of her dreams, but must conceal information that could unravel his world.

About to graduate from the University of Chicago with a degree in ancient history, flapper Jaden Poole has come to embrace the racy ‘new breed’ lifestyle. Heiress to the fortune of a prominent archeologist, the thought of following in her father’s footsteps bores her to tears—until she’s given the opportunity to decipher a room full of pre-dynastic Egyptian hieroglyphs. Amid the mystical walls, and with at least a fifth of bathtub gin in her belly, she missteps and suddenly finds herself sitting in the sand outside the dig site in the cool of the night.

Omari—Commander—Elydian Amun’s priority is to control and protect the oasis that supports the city of Anuk-dye, and to keep peace among the people of his camp—even if it means doing the job of a lazy son of a politician and soothing an obstinate, jealous lambish (camp whore). But when a curvy, daring young woman who speaks using strange phrases wanders into his camp, he can think of nothing other than making her his.

Jaden knows that they have no place in each other’s lives—and if she goes all the way with Ely, it will leave a scar on her soul that will last an eternity. After resisting his many passionate demands and experiencing his surprisingly solicitous nature, she decides to give him what he seeks. All too soon it is discovered that not only is Jaden miles from home, but that, through a debacle that is her fault, she may not be able to return.

What Jaden wouldn’t do for a flask of gin and a hot Dixieland tune to erase the boredom right about now. Sadly, the only item available from her wish list was ‘hot’. The sun was relentless in the Sahara, even in February. She shifted in her seat, the backs of her legs sticking to the leather, and tightened the scarf that held her straw hat in place. The least they could have done was send a covered car. She never saw value in how the sun affected her skin, no matter what Coco Chanel and her golden-brown tan did for fashion.

What was I thinking? Jaden shook her head. She must have suffered a momentary lapse in judgment when she’d decided to leave Chicago for a trip to Egypt to pay a visit to a dig still subsidized by her late father’s bank account.

Oh, yeah. Now I remember. This little hobby of Pops’ was threatening to deplete his entire estate—her entire estate, of funds. Although Pops had provided her with an ample allowance in the four years before his death, now she was in charge, and this silly sifting around in the sand needed to stop.

“Not long now,” the weathered driver said in Egyptian. “Another hour or so.”

She shot a half-hearted smile in the driver’s general vicinity.

Mom had passed on years ago. When Jaden had come of age, her father, ‘Pops’ as she’d dubbed him, had decided to stop bringing her along on treks across deserts and such, to dig up his trinkets and baubles formerly owned by people long since dead. So she’d been left to dawdle about at the University of Chicago—she grinned in retrospect—where she had taken her sweet time with her studies and danced at the rubs as often as possible. She’d burnt her corset, shimmied her way around campus, and made time with the boys. Ah, the carefree life of a flapper. Primly folding her gloved hands in her lap, she tapped her toe to a catchy ragtime number that popped into her head.

Jaden’s pleasant thoughts skidded to a halt like the needle of a Victrola scraping across a phonograph record. Her gaze focused on the desert and, pressing her lips together, she twisted them into a sour pout. Two things needed to happen during this impromptu North African excursion. She was determined to break up the current dig and send everyone home.

Her other assignment—given to her by her girlfriends—put a smile on her face every time she thought about it. “You simply must have a bit of fun with some foreign cuddler. And take notes, Poolie. We’re dyin’ to know how they’re doin’ it in Egypt these days.”

Each of their gang had a handle, a nickname—and ‘Poolie’ was hers.

But where, exactly, she would find a petting party full of acceptably handsome flaming youths here in no man’s land was beyond her.

Smothering a wicked giggle with her fingertips, she thought of the illicit parties she and her girlfriends had attended. Life had been utterly dull before college. There were few pleasures in life, and the sparse fare set before a body should be scooped up with both hands—at least, that had been her philosophy since moving into the girls’ dormitory her first year at U of C.

She glanced at her driver and suffered a shudder of revulsion. No pleasurable opportunities are to be had in the near future, that’s for certain.

Almost an hour later, they pulled off the main road. It was dusk by the time she was shown to a private tent across the way from her late father’s former colleague, Doctor Harper. Looking out over the encampment, she noticed that it simply buzzed with activity, all paid for by her father’s estate. She really hated to be a wet blanket anywhere, but bringing an end to the dig was critical for her survival—and better sooner rather than later.

At a small porcelain basin in her canvas quarters, Jaden attempted to wash the desert floor from her skin then set out to find a bite to eat and, hopefully, some distillate libation in the mess tent. She wasn’t really a corn fiend—liquor, or giggle juice, as she and her little gang of gals called it, had a way of banishing the doldrums—and if there existed anything duller than this necessary trek across earth and sea, she’d be quite surprised.

“Doctor Harper. So lovely to see you again.” Jaden smiled, although she was bone-weary and too tired to chew the food set before her.

“My beautiful Jaden Poole. I’m so glad you’ve arrived safely. Was your journey pleasant?” He took the seat opposite her. The same age as her father, Doctor Edward Harper sported thin white hair over red, parched skin, with a set of fuzzy cheeks and chin to match. His kind brown eyes regarded her like a loving uncle’s.

The Oasis of Eden was probably the best described place and made me want to pack up my things and make a journey there. It was probably my favorite part of the book. This was Elydian’s home, what a home...

Share what you thought about Oasis of Eden and earn reward points.

There isn’t anything much worse than a person who calls themselves an authority on something they haven’t even lived through, wouldn’t you agree?