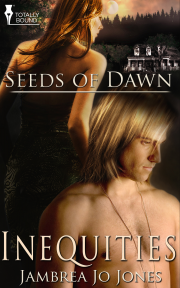 Book 3 in the Seeds of Dawn series

Sometimes you need to take justice in your own hands.

Russell Masters is having a pity party. Woe is him—he isn't fit to be in charge. If he doesn't change his way of thinking he could lose the very thing that could make him stronger.

Vivian Sommer can't understand why her mate won't claim her. They are destined to be together and she wants to be Russ' with an all fire passion. It means family and finally belonging. But she isn't going to sit around while he figures out they are better together.

Her tribe isn't willing to let her go with out a fight. Russ and Vivian must work together and stand strong because another threat could shatter their very existence.

Russ Masters’ anger had anger. To top it all off he was unsure of himself for the first time since becoming the alpha of his pack. Things had been fucked up from the day he had that first premonition. Damn the Ancients for making his life hell. It was hard enough taking care of a pack of unruly wolves, but add in war and magic and he was screwed.

And now he was whining. God damn it. Russ slammed his hand on the wall nearest him. He’d escaped to his rooms after the last meeting of the pack before Zareb and the bunch left for Africa.

And wasn’t that a fucking joke. Why was he even alpha? No magic to speak of and one of his betas was swimming in power. Shit. He needed to stop the pity train, but it was a downward slope he couldn’t seem to get off.

His very first vision did not warn him of all that was to come, but wasn’t that just like the Ancients. They liked mystery and making you work for the information. Nothing was ever easy with them. He needed to get over the injustice of it all, but it stuck in his craw that he was being put in second place. How could he compete with Zareb? The man was born before Russ was even thought of. Hell, before Russ’ great-grandparents were even thought of. Zareb was strong, magical and a leader. When he returned from his journey, Russ would turn the pack over to him. He really didn’t think he had a choice in the matter. He was weak and weak didn’t cut it in his world. Nope. The weak died.

A knock on the door pulled him out of his doom and gloom. He put his alpha face on and tamped down on the negativity. It was bad enough he doubted himself; he didn’t need the rest of the pack to feel it.

He didn’t expect to see Ive walk into the room. He thought they were done talking. She wasn’t even part of his pack. The fox shifter should have never shown up then some of the mess he was in would have been avoided.

“I needed to speak to you privately before we left.” Ive moved to the lounger he had by the window.

She looked comfortable in her surroundings. Hell, she’d probably make a better alpha then him, she had the balls for it. Russ had to stifle a chuckle. At least some semblance of a good mood was returning.

“I thought you said all you were going to.” Russ got back to business.

“No. This is personal and involves my tribe.”

Russ didn’t know what that had to do with him. Her tribe was hundreds of miles away and none of his concern. Russ waited expectantly. He wouldn’t force her to talk.

“I’m sorry we brought this to your door, but we didn’t think we had a choice.” She knotted her hands together nervously. It was the first time he’d seen her unsure of herself.

“You’ve said all this already. Was there something new you needed?”

“Don’t—” Ive looked down at her hands. “Don’t blame Vivian. She cautioned against us coming, but I convinced her.”

Vivian. Another problem he didn’t need that Ive had brought to his door. Things would have been different if they had both stayed home.

“It is what it is, there is no blame. You were called to your mate. That’s natural.” Russ assured her as best he could.

“I’m glad you see it that way, but there are others who don’t. My tribe doesn’t believe in inter-species relations. They aren’t going to be happy you’re a wolf and they will come hunting for Vivian.”

“You worry about the trip to Africa and your mate. I’ll take care of things here.” Russ moved to help her out of the chair. “You need to be going now. I’m sure the others from the pack who are going are waiting for you. We’ll be here when you return.” He walked her to the door and closed it.

It was good that he could help someone else. For the first time in weeks he felt like the head of his pack. Maybe he should go to the gym and work some of his tension away. He was tired of dwelling on the past and other people’s lives. Nothing ended the way he thought it would. Dmitri wasn’t the bad guy and after all this time he was deflated. The goal had been to take Dmitri down for the hell he’d put the tribe through. But to find out Dmitri was a soul who possessed someone else stopped all thoughts of ending the man’s life. Russ’ visions told him that Dmitri would die at the pack’s hands.

Technically that was true, Dmitri was dead, his spirit once again trapped, leaving the true soul to have his body back. Djimon couldn’t help it that when the pack looked at him they saw Dmitri, the man intent on destroying them all. Nothing was as it seemed. That, he should be used to.

Yep, time for the gym. He was sick of hearing himself think. He wanted to exhaust himself enough that he could sleep peacefully tonight.

Holy cow, this series keeps getting better and better. I am looking forward to what looks to be a totally explosive finish. I highly recommend this series to anyone who loves a quick short read that...

Inequities proves that love just doesn't care where you come from with waves of suspense, passion and humor that holds you until the last page is turned.

Share what you thought about Inequities and earn reward points.