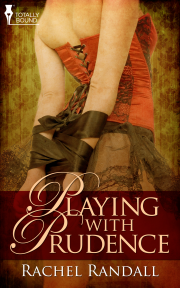 Fantasies are even better when they're shared.

Prudence loves the sexy games her husband arranges for her, and she craves the punishment for losing as much as the pleasures of victory. Edward is frustrated, however, that Pru denies them both her true submission by telling herself they are only playing.

The cord slipped through the hook, pulling her arms higher above her head. Edward made a satisfied sound that settled low in her belly, warming her with irritation and arousal both. “You’re very pleased with yourself,” she said, turning her head, determined not to let him see her answering excitement.

His fingers traced along her collarbone, teasing out goosebumps from her skin until she gave him her full attention. “And you’re angry with me. For which of my presumed offences, my dear?”

“Right now? The fact that you moved Harry to the Gold Room.”

“It overlooks this room!” This well-lit room with its lace curtains. This room where their figures must be clearly silhouetted in all their wickedness.

“Better here than overlooking the garden maze to give him an unfair advantage.” He paused for a response she didn’t give and he laughed, low and silky. “Ah, good. Your disapproval makes this all so much more fun.”

His fingers pinched suddenly, twisting her nipple until bright shards of pain radiated out from the nub. She hissed.

“Raise your hands higher, Clarke. If I have to tell you again, I won’t touch you at all tonight.”

Obediently, Pru lifted her arms, knowing he would otherwise make good on his threat. The heavy silken cord that bound her wrists together was tight enough to chafe. Edward—for her Ned was Edward at these times—pulled at the tail of the cord until the line ran smoothly through the ornate iron hook on her dressing room wall. The knot he’d made snagged into place, keeping her arms firmly where Edward wanted them. She was suspended from the hook, just on the verge of needing to go on tiptoe, and her body trembled briefly with the effort of finding and maintaining her balance.

He released the line, stepping very close. Her bare breasts tingled at the sudden proximity of his heat. With his shirt stripped off, she could make out the sheen of perspiration clinging to his olive skin. He was an active man, a gorgeous specimen, and Pru was utterly in thrall to his body, as always. The hollows at his hips, the cording of his forearms, the ridges on his abdomen—she longed to paint them with her tongue as well as with brush and canvas. He would let her, too, but only when he chose the moment.

“What gives you the right to disapprove of me?” Edward was asking her softly. His pupils were widening black inkblots against the blue of his irises. “I asked you to do one simple thing...” He sighed and turned away, moving to the washbasin. “You were very disappointing.”

Her eyes narrowed as she stared at the broad muscles of his back. Disappointing. This from a man who three hours ago had pushed her down onto the dining table, shoved up her dress and fucked her to his completion.

She squirmed, remembering the feeling of his come trickling down the crease of her thigh and the way he’d panted against her back. Her involuntary movements disrupted her fragile balance—she twisted for a panicked moment before the knot creaked loudly against the hook as her weight redistributed.

He sauntered back towards her, a wet flannel dangling from casual fingers. She said quickly, “The challenge was only to see if he remembered me, not to make him uncomfortable. The way Harry looked at me—”

Edward’s head tilted with hungry interest. “Harry, is it?”

This story was short but was packed with enough sexual adventure that left this reader wanting more. Great story!

Share what you thought about Playing with Prudence and earn reward points.