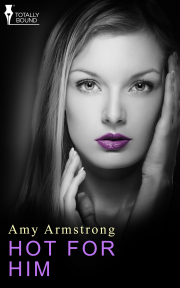 Is self-confessed control freak Elena able to let go of her fears to win her heart's desire—the enigmatic billionaire Charles Hunt—a man who requires nothing less than her absolute submission?

When feisty wild child Elena Meadows is invited to Cannes by her uncle Henry, the timing couldn't be better. A successful interior designer in London, Elena is a stout believer in the old adage work hard, play harder, but her fast-paced lifestyle is beginning to take its toll. A week basking in the heat of the French Riviera sounds like the perfect way to recharge, but upon her arrival she discovers that Henry has been inadvertently called away leaving his business partner Charles Hunt to man the helm. Elena has always been attracted to the American billionaire, but found his dominant personality at odds with her own.

Charles has never hidden his desire for Elena, but will accept nothing less than her absolute submission. If Elena could learn to relinquish control, they would make a formidable couple, but breaking the habit of a lifetime doesn't come easy for a self-confessed control freak even though the sexual tension between them sizzles hotter than the midday sun.

With a low, drawn-out groan, Elena reached out and whacked the button on her alarm clock before burrowing deeper under the toasty duvet with a satisfied grunt. The blasted thing continued to buzz.

"Leave me alone," she moaned hoarsely. "It isn’t time to get up yet."

The buzzing increased until it was so loud the noise was like a physical thing inside her head, as if her brain was thrashing around in there, trying to beat its way out of her skull with a claw hammer. With a silent curse, she threw off the covers and sat up.

Whoa. Bad decision. When the room began to spin and a hot flush erupted, her entire body got so hot she thought it was trying to solve the world’s energy problem. She made a grab for the bedside table and gripped it tightly, trying to breathe through the sudden nausea while she waited for the woozy feeling to pass.

The good news was that the incessant buzzing had quit. But why was she so parched? She must have taken up astral projection in her sleep because eight hours of crawling through the Sahara without so much as a sip of water was the only possible explanation for her indescribable thirst. Well, that or the six tequila shots she’d knocked back in The Salsa Bar the night before. Oh, and that bottle of red wine she’d polished off in All Bar One might have contributed.

When images of dancing with a five-foot-nothing Ricky Martin wannabe ran through her mind, Elena put her head in hands and leant back against the headboard. She couldn’t remember much about the night, but she did recall slapping the guy when he’d tried to cop a feel. Made sense. Elena hated men who got all up in her face—or arse as the case might be. What the hell gave them the right to treat women like sex objects? Consenting to a dance did not give him the right to grope her like she was his for the taking—nothing more than a possession. Elena belonged to no one but herself.

The damn buzzing started up again.

"No, no, no, no!" She reached for the alarm clock and squinted at it in the dim light of the room, but the evil thing was silent. Ah, it wasn’t the alarm, it was her mobile phone. Who the hell would be calling her in the middle of the night? Okay, it was nearly six, but what the hell?

She grabbed the phone and fumbled mindlessly with it before finding the right button to answer the call. It had better be an emergency or the sodding sleep destroyer was going to get a piece of her mind.

"Hello," she all but growled out.

"What sort of greeting is that for your favourite uncle?"

Elena frowned, fighting through the fog in her groggy, sleep-deprived mind. "Uncle Hen?"

Her query was answered with a low, rumbling chuckle. "You’re twenty-six now, Elena. Henry would be sufficient."

"Wha—?" Elena’s mouth was so dry, she couldn’t finish the question. She grabbed a glass of water from the nightstand, downed the lot then tried again. "What can I do for you Uncle, uh, Henry. Is everything okay?"

"Quite. I thought it would be good to catch up. I’m in your neck of the woods."

"No, Europe. I’m going to be staying at the villa in Cannes for at least a week. I was hoping you’d join me."

"Yes, you could. You work too damn hard for someone so young. I admire your dedication, but it wouldn’t kill you to take a break. You have staff. Delegate."

Elena started to shake her head, but thought better of it when the claw hammer started its bashing routine again. She couldn’t possibly take a holiday, could she? Elena’s interior design company was fast becoming one of the best known in London. And she’d worked incredibly hard for the past four years to ensure its continued success. The last holiday she took was...wow, she couldn’t remember, but it had to have been at least three years ago—maybe more.

Amy Armstrong is a Brit that loves chocolate, prosecco, and sunshine. She lives and breathes paranormal romance and urban fantasy, but is also a fan of the classics and pretty much anything else she can get her hands on, including but not limited to contemporary romance, thrillers, horror, dark fantasy and young adult fiction.

Amy writes stories filled with heart, heat and passion. She loves to read about strong woman, but believes heroes come in all different shapes and sizes. She is happiest when writing or soaking up the sun with a pina colada in one hand and her kindle in the other. Her family and friends are an important part of her life and she loves meeting new people with similar interests. She is a full time, multi—published author and loves to hear from readers. She writes M/M romance under the pen name Lavinia Lewis.

Hot For Him is a billionaire story (yes I think they are a sub-genre these days) but unlike a certain other book that will not be mentioned, the heroine Elena is intelligent, sassy and can pay her o...

Share what you thought about Hot for Him and earn reward points.