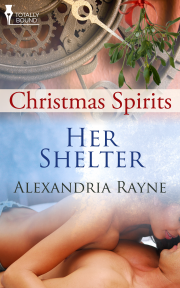 The ghost of Christmas Future…

Can a strong Alpha learn lessons of the heart from someone who refuses their own emotions or will the Ghost of Christmas Future be forced to interfere?

New pack alpha Reinhold struggles with control over his pack, trying to provide the best for them while maintaining his relationship with the Sisters of the Moon.

Mistress Crissy is the solid, logical member of three sisters that have been granted possession of all wolves in this world by Diana, Goddess of the Moon. Her connection to Reinhold is purely lust based, or so she thinks until he pulls a stupid stunt and injures himself and her heart.

Can either of these two see heart to heart or will it take a little intervention from the ghost of Christmas Future to force them both to realise that they need each other as Mistress and switch?

Snowfall coated the entire forest as it had been falling for days. Fresh pepper scent mixed with asphalt filled the air. The snow had stopped shortly, allowing enough time for Reinhold to get away from Katiera to go find food for the two of them.

Both had been in wolf form for travel. It’d been easier than driving due to the roads being jammed with all the holiday traffic or buried in snow. Christmas was near. Reinhold had left Katiera in charge of the pack to raise the new babies and help the first time mothers while he was away but leaving wasn’t easy.

Rather, he’d been forced out. That pissed him off. But Katiera had good reason, and he couldn’t argue with that. “Look, I need time with the pack, and you need time to spend with those who own you.” Katiera’s words echoed in his mind. It’d been only a few months since he’d been introduced to the three who owned all wolves, but he’d fallen hard for them all, first for Lynne, then her two sisters. The problem was that the three sisters insisted on a Dominance/submission type of relationship.

Katiera persuaded him to follow his heart and accept the D/s relationship that the sisters imposed despite the obvious issues any wolf would have submitting to a human. No proud wolf submitted to a stupid, weak human. Ever.

But Katiera had logic. Besides, I know what you’ve been doing. Even her glare was cute.

Huffing at the memory, his head raised to scent the wind. A deer was nearby, marking territory.

The musky, forest scent mixed with the stain of deer piss alerted him that his prey was not more than four hundred metres away. Slouching low, he padded through the snow until he reached site of the deer. A twig crackled beneath his paw.

The deer looked up. The deer was large and brown, and more of a buck. Large antlers protruded from the buck’s head. It snuffled in Reinhold’s direction.

Reinhold narrowed his eyes and glared.

The deer took a step towards him.

His heart thumped loudly in his chest, he’d never taken down a buck before without pack help No one was around for about a mile, but he damn sure wasn’t about to retreat. He’d taken on corporate suckers in the real estate world to amass millions of dollars, surely he could take down a buck without the aid of the others. He was alpha, after all.

Do it. The buck raised his head proudly and looked askance.

Reinhold heard mocking laughter in his head. Fuck you. He snarled and charged forward, leaping into straight into the air at the buck’s throat.

The buck turned and ran, galloping off into the woods.

Reinhold landed where the buck had been. Jaws opened and his tongue hung out as he chased after the buck down a dirt trail that led deeper into the forest.

The buck took a sharp left and continued charging down an unbeaten path.

Reinhold kept track of the buck’s scent and skidded into the tree nearby, causing snowfall to land on him. Damnit! He growled and shook the snow off his fur before continuing his pursuit.

Sunlight disappeared above the thick canopy of pine needles and branches as Reinhold ran deeper into the woods.

He stopped and sniffed the air, looking for deer scent. He smelled nothing amongst the thicket and bramble that lay in his path. Blinking, he stood as a man again, dressed in jeans and a loose fitting dress shirt with his long blonde hair pulled back. The tips of his hair had been dyed blue to match Katiera’s new hair colour, leaving him with an interesting look and a lot of dye on his rather pale skin.

Scanning the area, Reinhold waited, listened. A few birds chirped and leaves rattled in the distance as a wind blew past him.

He’d shiver but the wolf in him revelled in the cold. Timber wolves tended to relish the cold weather, and the Northern Midwest was just beginning to get cold in December.

The air grew thick around him as a fog set in. Voices whispered in the distance as the sound of a shovel scraping against rock echoed throughout the forest.

Something caught his attention. He quickly became the wolf, his ears perking up. Setting his nose to the ground, he sniffed the snow covered path before him, picked up the scent of dirt and blood. Odd, by the looks of the forest, it would seem to him that things were hibernating, not dying. The trees were healthy, thick branches sticking out to blanket the setting sun behind him. The wind howled as it cut through the forest, a low, wailing sound that reminded him of a wolf’s howl.

What is going on here?

Reinhold crept slowly down the path towards the sound of the shovel and voices. The closer he got, the more the voices seemed familiar. Having forgotten the deer momentarily, Reinhold changed back into a man, standing to his full height of six feet three inches. Dressed in black jeans and loose fitting dress shirt that Lynne had purchased for him, he ducked low in the bushes as he came upon a clearing.

Several people he recognised stood in a circle while Katiera stood at the head of them, holding the shovel.

Overjoyed to see that she wasn’t mad at him, he started forward, but his leg was caught on thick bramble. Looking down at his leg, he cursed and removed his foot from

the thorns before returning his attention to the group. Before he took another step, he waited.

“I decree this to be the burial spot of Reinhold, Alpha and lover.” Katiera wiped a tear from her eyes before returning to shovel to the ground and heaving out a large pile of dirt.

“What the hell?” Reinhold took a step forward into the clearing. Nobody turned to face him. “I’m not dead yet, Katiera.”

The softer side of Sascha Illyvich, her work ranges more towards contemporary themes without so much darkness. While carrying a wicked hot ability to write scorching sex scenes, Alexandria prefers to play with plot and characterization in less harsh terms than Sascha. Also, she looks better in the dress and lingerie than he does.

Readers can find her work at here and at WriteSEX

Share what you thought about Her Shelter and earn reward points.