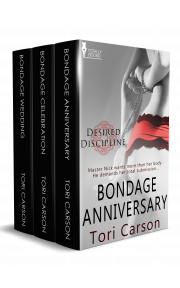 The Desired Discipline series: Part One

Laura’s treacherous body revels in Nick’s domination. As a natural submissive, she thrives under his strict, unyielding command. He trains her to respond to his every touch and the line between pain and pleasure blurs— so much pleasure, she’s lost in it. Laura craves his firm hand, yet his sin of omission shakes her trust. She willingly offers her body, but guards her heart. Quickly, she learns Master Nick isn’t just a hotter-than-hell, leather clad, flogger wielding alter ego. Dom isn’t a role he slips on like a mask. It runs in his blood, defines his personality and once unleashed, there’s no going back. Master Nick won’t play at D/s. The gift of her body isn’t enough. He demands her total submission.

Laura refused to say ‘obey’ at their wedding. Now Nick thinks he’s found the key to her obedience. Will Laura fall into line or rebel against his unfair sex-tactics?

Nick has tasted Laura’s submission and can’t get enough. Now he wants his headstrong, stubborn wife collared once and for all. When a disgruntled ex-employee sets Laura in his sights, the stakes become deadly. Nick must bring Laura to heel before it’s too late.

Laura is both enchanted and repulsed by the platinum and diamond slave collar that Nick is determined she will wear permanently. While Laura loves and gladly accepts his domination in the bedroom, he demands more. Nick will stop at nothing until he owns her body and soul.

Laura fears losing her independence, but one incredible orgasm at a time, Nick is drawing her further into his silky web of bondage and dominance.

After Laura is attacked, she learns there is more to being a good submissive than simple obedience. If they are going to find their happily ever after, Laura must be strong enough to battle both Nick’s demons and her own.

Amanda sought a man with a gentle spirit—a poet, or an artist. How could she fall passionately in love with this bad boy with a rope and a spanking fetish?

Well aware of her weakness for arrogant, dominant men, Amanda is determined to avoid bad boys. In her blog, Confessions of a Virgin Sex Addict, she encourages women to deny their baser instincts and search for a man with a gentle, artistic spirit.

James, a professional bodyguard, has secretly admired Amanda for months. Night after night, he visits DiscipliNation, in hopes she will leave her receptionist’s desk to play in the great hall.  When a stalker threatens to murder her, James offers to step in as Amanda’s protector, and in turn uncovers her secret life.

She isn’t the innocent little subbie. In her own words, she has used anyone and everyone to get what she wants. Is this stalker just a figment of her imagination, another ploy to swindle friends and family? Or is her life really in danger?

Thrust together, they both must fight their bodily desires. Being near James twenty-four hours a day is an unbearable temptation. James knows he can protect Amanda from an attacker, but can he protect her from himself?

Laura woke up in bed alone. She sighed in frustration. It’d been that way for years, why was it bothering her now? She rolled over and put her hand on her husband’s pillow. Her mood softened when she found a rose and a card. Her husband had been so preoccupied lately, she’d been afraid he might forget their anniversary. She should have known better. Sniffing the rose, she noticed the thorns had been removed. Of course, he would think of everything.

Opening the card, she saw it was more like a pamphlet. The cover was a photo from their high school days. Wow, did they look…innocent, and stupid. The next page was a collage of pictures from back in the day. Goodness how times had changed.

‘My dearest Angel, I suspect looking at these pictures, you were struck by how much has changed since we first fell in love. My rainbow-streaked-hair girl has turned into a stunning corporate executive. Your hand-me-down station wagon with the monkey hanging from the rear-view mirror has been replaced with a car much more fitting your elegant style. Those terry cloth rompers, flip-flops and plastic bangles have been traded for linen suits, high heels and diamonds. We won’t even mention the changes in me. Suffice to say—goodbye cheesy moustache!

Our love has changed and grown too. I was pretty sure we had something special when we married. Now I know you are my life. My world revolves around your smile. Although I try to make sure you know that, sometimes I get mired down in day-to-day crap and I forget what’s really important.

‘I took note of the titles, purchased and read them all.’

Holy fucking shit! He read them. Read them all. Every raunchy, hotter than hell scene barraged her mind. That’s it. I’m divorced. Or dead. Our weekend getaway is just a ruse to give him time to hide my body. Her hands shook so badly she laid the card on the bed before she continued.

‘Some I liked better than others. I found a few more I think you’ll like. We can talk about them this weekend.

I see now I have been neglecting you. Like everything else, our sex life needs to evolve. I’m relieved to see every story had the girl as the sub, except that one with the switch couple. I hope you weren’t overly fond of that story. That won’t be happening.’

She read and reread the last part. It sounded like he wanted to play. Now her breathing was really ragged. Hope began to flicker like a little flame. Her husband was a successful attorney. He was Branson, of Branson and Associates. He knew how to take command. Just the thought of him commanding her got her wet. It was a little frightening. He certainly wouldn’t be a wussy Dom. Once he committed to dominating her, she wouldn’t be allowed any wiggle room. That’s just the way he was. Was she ready for this? Oh yeah, as long as he wanted it too… She loved him too much to push him into something he wasn’t comfortable with.

‘Please see the attached form. We need to be on the same page with this. Look over the list, add to it if I left anything out, complete it and bring it with you tonight. I have completed the same list. We will discuss it at the hotel. I’m sure we can negotiate a game plan from there. Be ready at four p.m. Wear a skirt or dress with stockings, high heels and no panties. Your soulmate, Nick.’

Before she could do more than glance at the form, her cellphone buzzed letting her know she had a text. It was from Nick.

‘Did you find your card?’

What should she say? She didn’t want to text about this, but he had to be wondering how she had received his…invitation.

Why was that hot? A shiver startled her. It was a freaking text message, yet she felt his whiskers brush her ear. His soft, warm breath caressed her neck as he whispered those two words. Two condescending words she wanted to hear over and over again.

Laura needed to get her imagination under control and focus. Nick expected the list to be completed by this evening. She was a little intimidated by the task. The list was long, detailed and extensive. If he’d had John, his PA, type the form, she would kill him. No doubt about it.

Nah, John would have used a sliding scale. This list was very cut and dried. Each item had three choices—want to try, need more information, not interested. Yep, the form was very Nick. No shades of grey.

Share what you thought about Desired Discipline: Part One Box Set and earn reward points.