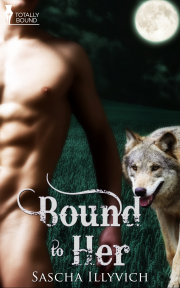 Can Luka convince Michele that she is his mate, or will his being single cause the regional packs to turn against him?

Luka has finally united the local and regional packs of Northern California, but Lajon the Eldest says Luka needs a mate to balance him out.

Michele hates the fact that she's Lupine and wants nothing to do with her heritage since the accidental killing of her parents. Yet the necklace Luka wears intrigues her despite her disposition towards wolves.

Can the two lovers share passion and learn to be together from the heart or will the work Luka's put into building an alliance go to waste?

Reader Advisory: This story has been previously released as part of the Over the Moon anthology by Total-E-Bound

1.6em;">Steadying himself against the railing, Luka surveyed the room. A few paddles had fallen on the floor from the door slamming shut. A rose-coloured flogger hung from the back of it and swung back and forth.

The woman who'd stormed out hadn't even bothered to apologise for what she'd done or had been trying to do.

"Fuck!" Luka yelled. Pounding his fist on the railing in front of him, he steadied himself. The broad he'd just let go hadn't been able to get him off. She wasn't his mate—nor a very good submissive, either.

Too many damn bitches trying to top from the bottom.

Never try to top a wolf from the bottom. It was a dangerous thing to do, unless you wanted to be his dinner.

Worse yet, this partner was human.

Clutching a singletail with one hand, he lifted his free one to touch the gold, diamond-shaped pendant that swung against his sweat-covered chest. It hadn't so much as warmed when he'd brought her into this room and stripped her.

She was hot, too. Pert tits that thrust out, long, curly hair that swayed past her ass when she tilted her head back and gave him a glance at her exposed curves. And the trail of her slender neck had made him hard.

But her appearance did nothing for the pendant that was supposed to bind him to a woman.

Sighing again, he hung the singletail back on one of the tacks from the toy wall. Heading towards the exit of this room, he decided going upstairs for a drink was the best course of action.

Oh, and he'd probably have to have Tiffany come over and clean up the room. His occasional submissive-in-training hadn't been over in probably six weeks, now, and the house was becoming a mess.

He'd sent her away in hopes that another female wouldn't smell her and become insanely jealous.

Snorting, he headed upstairs and into the kitchen. Setting his hands on his hips, he pondered what to drink.

Glancing at his wet bar, he mentally perused what he had on hand. Vodka? No, too cold for now. Scotch? He wasn't in the mood for a cigar.

Bourbon? Nodding, he walked into the kitchen and retrieved a glass from the bar, filled it with two ice cubes and poured himself a drink.

Bringing the liquid up to his lips, he inhaled the charred American oak aroma. He took a sip and pondered his next move. He only had a few days left before the moon cycle came full circle and Diana chose a mate for him.

He didn't want her doing that.

Despite the fact all wolves belonged to Diana, they were still sovereign. At least as Northern California's pack Alpha, that was his stance.

The fact was that if Diana chose his mate, he'd be relegated to being the pack beta. Leaders moved before it was time, she said. Not when the time was up.

Taking a larger sip of bourbon, he let the alcohol slide down his throat and warm him. It was winter outside, and regardless of the fact he'd been born a wolf, the creature comforts of humans still amused him.

Setting his glass down on the marble countertop, he picked up the phone and called for Tiffany to come over. The conversation was brief. He spoke, she listened.

He spoke more. She agreed and happily scheduled time to come over.

She was the perfect submissive, it seemed.

Share what you thought about Bound to Her and earn reward points.