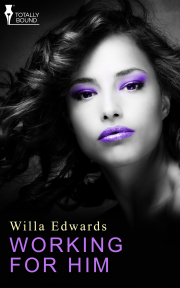 To complete the merger of his career, can Richard convince his submissive Serena to be tied up in a whole different kind of knot?

Serena Carter looks forward to the Vertical Aeronautics company meeting every year. Not for the hour-long lectures on corporate policy or earning reports, but to meet with her Master, the billionaire CEO of the company, Richard Barrett. For the course of the week-long conference, they meet to explore their dark desires for submission and domination, only to part ways at the end of each meeting to their own separate lives. Except this year her Master has a surprise that will surpass anything they've explored before.

Richard loves his time mastering Serena. She's the perfect sub, obedient without being cowardly, responsive, and just as interested in a little no-strings fun. But when the biggest deal of his career starts to go downhill due to his playboy ways, he gets the great idea to ask his little subbie to marry him, to give him a more conservative image and close the deal. But she stuns him when she rejects his request and flees, forcing him to reassess his plan.

Can Richard convince Serena that his proposal is more than just a business arrangement? Or will he lose his favourite submissive because of his own stubborn pride?

"Merlot, please," Serena ordered from the bartender, handing him the single paper ticket parcelled out so no one got drunk on the company dime. From the animated conversations around her, a few had already done so at their own expense at the hotel bar.

The Vertical Aeronautics annual all-people meeting had got off to the same start as last year, reminding Serena why she’d chosen to become an engineer. She’d much rather spend the day with gears and equations than people. Plus it was the closest she could get to flying, due to her horrible vision and flat feet.

Subtly, she looked down at her watch, trying to gauge how much longer she had to stand around the banquet hall and make nice with the other employees. The day had already been a long one, and the night continued to drone on. All she wanted to do was get out of this uncomfortable suit and too-tight shoes and relax for what remained of the evening.

"Ms Carter, how are you doing tonight?"

Serena turned and smiled at the man who’d slid up to the bar beside her, even though her cheeks were already tired from so many forced smiles today. "I’m doing well, Larry, how are you?"

He nodded. "Good, good." He smiled at the bartender and ordered a whiskey sour. "Though my department didn’t perform quite as well as yours did last year."

Serena nodded. "Thank you. We were very lucky."

Luck had nothing to do with it. It was damn hard work to keep her staff motivated, most of them still begrudging that she’d got the promotion to vice president over many of the more senior team members. But she’d learned long ago that modesty worked better at these work functions than the truth.

"I hope we’re so lucky next year."

Serena smiled and took another sip of her drink. Sure he did. But that would require him to get off his ass and spend less time between his secretary’s legs. "I hope so, too."

"How are you liking the conference this year?" Larry continued talking, and Serena fought back a groan at being forced to continue with such pleasantries. How does he not get the hint? "The food’s not as good as last year, but I’m enjoying the location. Vegas is a fun time."

She smiled, wondering exactly what kind of good time he was having in Vegas. "It’s nice to travel somewhere warmer this time of year, but Vegas isn’t my kind of town. Too much activity, too many lights." Too many co-workers.

If you like heat, a good plot that you can fall into for a little steamy fantasy time then Working for Him is a good choice. I’ll certainly read more by this author as her writing...

The sex is all detailed from Serena’s point of view: it is her reactions and emotions that are more prevalent and incredibly well detailed with plenty of steam and detail. This is a clever combination of se...

Share what you thought about Working for Him and earn reward points.