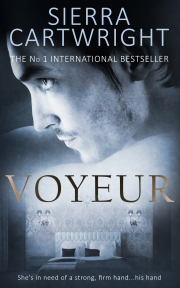 Marnie Branning lives out her fantasies in a safe way, attending a bondage night at an elegant country estate strictly as a voyeur. But one man, strong, sexy, dominating Zachary Denning sees what she tries to keep hidden, that she's secretly a submissive, in need of a strong, firm hand…his hand.

Under his unyielding tutelage, Marnie learns about herself, about what it means to be submissive.

And now, instead of being a voyeur, she'll learn what it's like to be watched, as her Dom becomes the voyeur…

Publisher's Note: This story was released as part of the Night of the Senses Anthology by Totally Bound Publishing.

Marnie jumped. A bit of her martini sloshed over the side of her glass, spilling onto the polished hardwood floor.

“I didn’t mean to startle you.”

A shiver chased down her spine. Although she’d never met him, she recognised the sound of his commanding baritone. She’d dreamt of him telling her to strip, to drop to her knees, to suck his cock. Now, with him so close, the reality of his voice sent a delicious thrill arrowing through her insides, making her hot and wet. Well, hotter and wetter than she had been only a minute ago. Damn. This man was the stuff of fantasies.

She started to turn to face him, but he closed his strong, forceful hands around her shoulders, keeping her firmly in place. “No. Stay where you are.”

“Liar.” His tone was warm, taking the sting out of the word. Impossibly, then, he moved in closer. She could all but feel the rub of his jeans against the bare skin of her legs. She should have worn leather pants, or, at the least, tights. Against her ear, he whispered, “You want to watch every moment. That’s why you’re here.”

“Yes,” she finally admitted. Master Theodore and his submissive wife Susanna were in the observation room. She was naked, on her knees, gazing up adoringly at him. Her breasts, with their hard, beautiful nipples were cupped in her palms, as if she were offering them, and herself, to her Dom.

About once a month, the couple opened their spectacular English country home to like-minded people. Attendance was by invitation only. Fortunately, one of the men who worked in her office, Darius, had been taken to the Waters’ Estate by his Domme, Jennifer.

Tantalised, Marnie had spent half a year badgering him with questions and begging for an invitation. Last month he and his Domme had come through, and she’d been allowed in as their guest. She’d met several of their friends, and she’d seen Master Zachary interact with a submissive, but Marnie hadn’t really gotten a chance to explore. This month, however, she was here on her own.

She’d love to be one of the people observed, instead of just the voyeur. But she knew that was impossible. She lacked the confidence, and, well, frankly, disliked her body. Despite eating more lettuce than a rabbit, consuming enough carrots to turn orange, forgoing enough chocolate to send Switzerland into bankruptcy, and sweating at the gym three times a week, she had bulges and ripples where they should never be.

Her heart skipped a beat, then slammed the next dozen together. “How do you know my name?”

“I make it my business to know all of Susanna and Theodore’s guests, particularly the unescorted submissives. Very unusual.”

She smiled, but it felt fragile. Had he known she’d watched his scenes? “I’m more of a voyeur, as you’ve ascertained. I’m not much of a submissive.” But if she were, it would be with this man. He didn’t need a set of weights. He was just simply blessed by the gods with a body that wouldn’t quit. No way in hell would he be seeing hers without clothes.

“You’re not much of a submissive?” he repeated. Was that disbelief that dripped from his voice? “This entire night is dedicated to dominance and submission. And you haven’t moved from this place for at least ten minutes.”

“Ah…I find it interesting. A curiosity.”

“Marnie? I asked you a question. Is your pussy wet?”

“Yes, I’m wet.” But it had nothing to do with the forceful way he held her. Or at least that’s what she told herself.

Share what you thought about Voyeur and earn reward points.