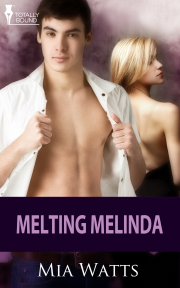 Melinda's ignored her attraction to her best friend's son, Ethan, for years. Now he's grown up and not taking no for an answer. Can she fight her attraction and his?

Ethan isn't a child and neither is his crush on the one woman who's been off limits. It only takes one look, one ragged breath, for Ethan to call her bluff.

“What can I do to make you come?” Ethan asked, his voice low and teasing.

Melinda George rolled the stemmed water glass between her fingers. Moisture glistened like tempting diamonds on crystal. One clear drop slipped down and splattered on the web of skin between her finger and thumb.

She stared at it intently. So much easier than meeting Ethan’s gaze across the linen-laid table. She licked her lips, wishing she could twist his words into a flirtatious come-on, but she couldn’t. Not with Ethan Thompson. Not with her best friend’s son.

“Nothing,” she answered, finally. “Your mom already tried to talk me into going, but I just can’t.”

“You love the beach house.”

Melinda glanced around the restaurant, begging Karen to hurry up and get there. Waiting in the romantic setting, across from Ethan, tempted every womanly cell in her body.

Off limits, Mel. Way off limits. Hurry up, Karen, before I eat your boy alive.

She chanced a look at him and nearly groaned. “Uh, stuff. Just, you know, stuff to do and things.”

“Ma’am? Are you and your son ready to order?”

Melinda tensed. Of course, the waitress thought Ethan was her son. She popped her mouth open to tell the blonde that they were waiting for someone when Ethan’s warm hand covered hers, his thumb swiping at the moisture on her skin.

“Melinda? Honey? You have a son?” he asked in mock surprise.

“Sweetheart?” he asked again. Ethan gently pried her fingers off the water glass. Cupping her hand in his, his traced her palm with the fingers on his free hand.

She stared at it, sandwiched between his larger tanned fingers, in confusion. God, the ticklish strokes felt amazing. Each feather-light stroke coaxed an answering pull between her legs.

“I can come back later,” the waitress said uncertainly.

“Honey, I’m home—whoa—am I interrupting something here?” Larry dropped a negligent kiss on her crown.

She had a moment of recognition, instantly followed by dread, as Ethan slowly drew back his hands.

“Teaching the waitress about making assumptions,” Melinda hurried to explain. Her palm still tingled and she closed her fingers around the sensation before dropping her hand to her lap. “Ethan, this is Larry. Larry, Ethan is Karen’s son.”

Mia makes her home in Minneapolis, Minnesota, where she divides her time between a job and spying on people. Mia enjoys long walks in Como Park, daisies, dancing in the snow.

Share what you thought about Melting Melinda and earn reward points.