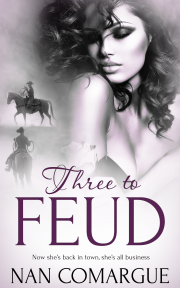 An old family feud cost Grace the love of two cowboys. Now that she’s back in town, she’s all business…but Josh and Drake are all about pleasure.

Adopted as a baby, Grace figured her biological family must have been pretty messed up but they couldn’t possibly have compared to the Alberta family she ended up with. For one thing, none of the family speaks to each other, despite living next door for generations. Once, Grace and her adopted cousins had hopes of ending the feud, but when she returns home, she finds the two men as distant from each other as the original brothers who started the feud all those years ago.

Grace was sexually involved with both good-natured Josh and dark, quiet Drake Walker years ago, before she left to go to university, but she’s only visiting now to arrange for an appraisal of her portion of the property. Her boyfriend Adam is offering more of a commitment than either of the two of them seemed willing to when she was younger, with each Walker rejecting her for his own reason.

When Josh shows up at her doorstep with beer and pizza on the first night, it’s as if the intervening years hadn’t existed. Grace soon realizes that the feud that meant so much to him when they were all younger no longer matters all that much. His visit leaves her with new hope.

Later it’s Drake’s turn to visit. Though he once thought the twelve-year age gap between them was too large to overcome, time has thankfully solved most of that problem, with Grace and Drake meeting on equal footing now—unless you count being taken from behind on the kitchen table.

At the end of her visit, Grace faces a choice between the two men, a choice that will no doubt rekindle the old feud. But is there a way for the three of them together to come up with a solution?

Publisher's Note: This book has previously been released as part of the Boots, Chaps and Cowboy Hats anthology.

“Get a move on, Grace. The clock’s ticking.”

Her boyfriend Adam spoke from the doorway. Though they’d worked at the same oil company for over a year, he rarely set foot in her office, clearly considering it a lesser executive’s domain. Unlike his office, hers had only a limited view of downtown Calgary and none at all of the famed Saddledome.

With two years’ experience over her, Adam was on the verge of a senior executive position while she was still assigned mostly routine accounts. It had been a banner day last week when she’d actually got to go to an offsite meeting, carrying a senior partner’s files for her.

Oh, well. It was the way of the world. She was paying her dues.

“I’m ready,” she said, lifting out the overnight bag she’d tucked under her desk. The small bag had felt light as air this morning but now it might as well have been filled with accounting tomes.

She’d already shut down her computer and cleared away the files she’d been working on. She liked to leave an empty desk each night, though perhaps that wasn’t such a good practice, since other people sometimes commented on her apparent lack of work.

“You look tired,” Adam told her when she drew near. He dropped an absent kiss on her forehead. “Long day?”

This is a short story on a mission, and it delivers a great outcome. I liked the overall plot, and rationale behind the romance...It is spontaneous, and entertaining, and leaves the trio in a good...

Share what you thought about Three to Feud and earn reward points.