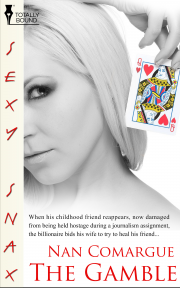 Cara and her billionaire husband Reeve Turner learn about each other—and love—when they bring his reporter friend Logan into their bed for a steamy ménage.

Cara and her husband, billionaire Reeve Turner, have been married for three years and Cara's been following all the rules laid down to her long ago by her elderly mother. She accompanies Reeve in his jet-setting lifestyle, including his current trip to Las Vegas, but she has never bonded with his spoilt rich friends or managed to think highly of the sexual conquests they continually brag about. Although her sex life with Reeve is active, she has never fallen in love with her husband. Love, at least, would make their empty marriage bearable.

In the middle of the hedonistic vacation, Reeve introduces her to his old college friend, an earnest man named Logan Winthrop who has become a serious journalist. Injured and taken hostage during his last assignment, Logan is shy and awkward, but he is also very attractive and with Reeve's guidance, he starts to recover emotionally from his ordeal.

Cara's nurturing instincts take over as she joins her husband in drawing out the troubled stranger. Seeing another side of Reeve awakens her feelings for him. But just as Logan seems to be on the edge of full recovery, Reeve asks her to guide Logan through a final assignment—a night with a woman. And that woman is to be her!

Cara stood on the balcony of the sprawling suite, looking out over the Las Vegas lights and frowning. She didn’t see the private wraparound balcony, lush with tropical plants lovingly tended during the day by a retinue of staff, the screened pool on the adjacent terrace or the panoramic view of the Strip far beneath. She saw only the hours stretching out in front of her.

Before her lay another night of gambling—or watching Reeve gamble—and pretending to be pleased with his friends, the sexually charged banter he exchanged with their girlfriends, and the whole of her wretched life.

Laughter drifted up to her from many floors below. The top floors of the hotel were exclusive— all of the suites were privately owned and were able to be rented out by the owners to elite clientele only—but the lower floors were simply hotel rooms available to anyone with a credit card and a taste for the good life. Reeve had owned his ten-million-dollar penthouse suite for five years now and every year, it seemed as if the rooms below them went to bolder and ruder people, until she felt that she didn’t dare walk through the lobby without being inspected or accosted.

But then, everyone on the West Coast knew who she was. She couldn’t hide at the Hotel Pleiades any more than she could in Beverly Hills. When your husband was handsome, well-built, worth billions from an internet start-up and not yet forty, everyone wanted to know him.

A heavy arm draped over her bare shoulders. "Why are you out here, my dear?" The words were mumbled and slightly slurred. Drunk already, and the evening had just begun! She resolutely turned and saw the broad red face planted so close to hers. It was grinning down at her. "Come join the party, Cara, baby. Your husband wouldn’t like to find you out here, hiding from everyone."

The drunk man stumbled back into the suite but Cara didn’t follow. Not yet.

There was truth in what her husband’s friend had said. Reeve didn’t like her to stay on the outskirts of any gathering. He wanted her to mingle and make friends. Superficially, she had. At least, there were familiar faces that greeted her warmly every time she encountered them. But after three years, there was still no one she could talk to quietly over a cup of kopi luwak coffee, no one she could confide in.

Here, in the midst of great wealth and purchased beauty, she was as lonely as the meanest, ugliest fairytale troll.

No one had ever told her that being the wife of the celebrated Reeve Turner would force her to be an actress, but that was what she felt like. Every smile she wore was one she had to paste on, and every word she uttered felt like a line someone else had scripted for her. Only within her own head was she able to be honest—but then, what did it matter?

She was Reeve’s wife, for better or for worse, and anyone looking into her life through a window would have said she’d had it all for the better.

None of the people looking in through the window could see what was hidden or tucked away in the corners of her mind.

Turning away from the view, Cara gave her reflection in the glass doors—sleek in a five- thousand-dollar couture dress—a final approving glance before stepping back into the six-bedroom suite. Every inch of the grand living room appeared to be filled with attractive flesh.

Although the suite was only used for three or four weekends every year, it boasted a full-time staff of four, which swelled to more than double that number when they were in residence. Like the others on the upper floors of the luxury private hotel, they did not rent out the suite. The priceless artworks alone, including an original Van Gogh and three Picassos, were irreplaceable.

In the centre of the room, resembling a Greek statue himself, was her husband.

His tall figure seemed to naturally belong in the middle of the action, the target of every man’s envy and every woman’s desire. Oh, yes, the girlfriends of all of his friends wanted him, it was there in the hot blaze of their eyes as they raked his tautly muscular figure up and down, comparing him favourably with their own boyfriends, who had let leisurely lifestyles become lazy ones.

"Darling," Reeve said as Cara approached, and reached out to take her by the hand. His grip was deceptive, appearing light and playful on the outside but full of steel within. Just like the man. "You’re just in time to hear about Steven’s trip to Bali."

Share what you thought about The Gamble and earn reward points.