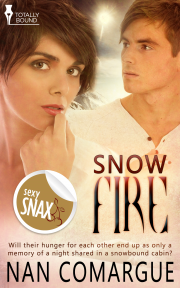 Stella’s sexy adopted step-cousin Callum comes back with strange new behaviors after his trip to his birthplace in Romania, making her wonder if she ever knew him at all.

Trapped in a snowstorm up on a secluded mountain, Stella’s family vacation turns into an eerie rendezvous with her adopted cousin Callum, whose sexy and mysterious edge has started to take on a dark undertone ever since he returned from Romania. So when two strangers show up at the remote cabin, she starts to suspect that it’s more than a coincidence that the men speak Romanian and are unusually interested in her cousin.

When the generator breaks down, Stella is forced to share a bed with Callum and their simmering sexual attraction bursts into hot flames. But can Stella find out what Callum’s hiding before the storm lets up? Or will their hunger for each other end up as only a memory of a night shared in a snowbound cabin?

“There’s someone in the house.”

Stella turned from the frost-covered window, already irritated. Storms made her edgy.

“What are you trying to do, scare me?”

She stared at her step-cousin, her hands crossed over the hideous sweater her aunt had knitted for her twelve years ago and still expected her to wear every year during the holidays. She hated the sweater but she loved her aunt.

Callum brushed the snow out of his blond hair. “There are tracks going all around the cabin. Two sets.”

Stella hesitated. The word ‘tracks’ made her think of wild animals. Were there any wild animals up on the mountain at this time of year, or were they all hibernating? She shook her dark hair back from her face. Why couldn’t he have just said ‘footprints’?

“Maybe someone forgot their key,” she suggested.

Callum still stood by the front door, dripping melted snow onto the mat. With his parka on, he looked poised for escape. Not without her, Stella thought. It was bad enough trapped up on the mountain for a whole weekend, but spending that time alone—she couldn’t even imagine it.

Although, the way Callum acted nowadays, she wasn’t quite sure which would be more dangerous—the storm or him.

“And that someone went all around the house peering into windows?” Callum asked. “Instead of knocking on the front door like a normal person?”

Stella grimaced. “Since when are our family members normal people?”

Callum looked up at her through his damp hair. Wet with the moisture from outdoors, his locks were a dull champagne color, unlike its usual gold. The entire Driscoll family was dark, like her.

“They’re not my family,” he reminded her gently, as if she were a child. “They’re your family, Star. Mine only by accident.”

These statements were too familiar. Stella turned back to the foggy window, her lips tightening. Ever since he had made that trip to his homeland last year, he’d been intent on distancing himself from his adoptive family. Her family. It shouldn’t have hurt as much as it did.

“Accidental or not,” she said without looking at him, “I think they’re trying to get in here.”

With the snow coming down in blinding swirls, it was easy to get lost on the main roads, much less up here on the privately owned mountain trails. In this weather, even making it the fifty or so feet from the car to the house could be an ordeal.

“Not them,” Callum said, his deep voice going even lower for a moment. “It.”

This tease of a story is a quick and sensual vampire romance.

Share what you thought about Snow Fire and earn reward points.