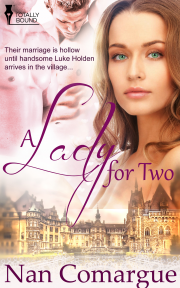 A Lady for Two

Aristocratic couple, Charles and Lise Hessell, enjoy bringing other men into their sexual play, but their marriage is hollow until handsome Luke Holden arrives in the village.

After three years of marriage to Charles Hessell, the last son of an old aristocratic family, Lise thought she knew everything about him. But when Luke Holden walks into their lives, and into her home, she realises that Charles has been hiding a past that included this sexy stranger.

Although the two men now hate each other, Charles is forced to employ Luke as his overseer when his former property manager absconds. The situation offers intriguing possibilities. Lise has dallied with servants before, with her husband's blessing, but this new arrangement would mean an emotional commitment that she does not know if she could contemplate.

With Lise's sly interventions, the two men are able to make up their own quarrel and when Lise catches them kissing passionately, she realises that she has fallen in love with both men. But is there room in their pairing for her?

Publisher's Note: This story has been previously released as part of the At Your Service anthology by Totally Bound Publishing.

Nan blogs about her writing journey and other interesting topics (zombies!) here.

Nan is Canadian, eh? So naturally she's written a contemporary romance with a professional hockey player as the hero (and a librarian as the heroine).

Share what you thought about A Lady for Two and earn reward points.

Nan Comargue - Interview for A Lady for Two

Why is there a focus on threesomes in your stories?

I think ménage is a really cool subject yet it's often just two women, one man, and used strictly to titillate men. I like flipping the idea on its head…what's better than one hot man who adores you? Two hot men who adore you, of course!