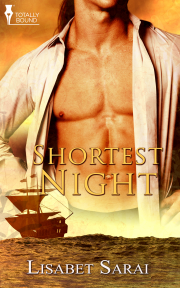 The year is 1595 in the reign of Good Queen Bess. Stage-struck, young Ben Hastings leaves his father's farm for London, to join Will Shakepeare's band of players. Hugh Templeton, the handsome leading man, takes the the innocent lad under his wing, but Ben soon discovers that Hugh wants more than just friendship. Meanwhile a savvy tavern maid named Jenny engineers a comedy of errors to save Ben from Hugh's lewd embrace and win him for her own.

Publisher's NoteThis story was released as part of the Brits in Time Anthology by Totally Bound Publishing.

“No, no! Stroke him! Caress him! You must show the audience that you are completely besotted with the creature.”

Master Will was in high choler, that was certain. Poor Ben! The quaver in his youthful voice lent credence to his womanly role.

“I am most sorry, sir. But in truth, the mask smells something horrible. I can scarcely bear to touch the hairy thing.” Ben rose, dumping the other actor from his lap and wringing his hands prettily. Hugh admired the strong, graceful limbs half-revealed by the gauzy robe of the fairy queen the boy was impersonating. “Please, Master. Could you not change the script to have me admiring him from a distance? The stench makes it hard for me to breathe, let alone speak the lines.”

“Ben, this is the theatre. We must suffer for our art. We must give our all for the audience. Or have you changed your mind about wanting to be one of the Company?”

“No, of course not, sir. You know that is my fondest dream.”

“Then follow my direction, sit down, and give us the lines again.”

With a sigh, Ben re-seated himself on the stage with his back against the column that simulated some ancient tree in the heart of the forest. Trying not to grimace, he cradled Harold Warwick’s masked head between his thighs. Hugh imagined his own head there, in lieu, burrowing down into Ben’s crotch. He smiled to himself at the image. He, for one, didn’t intend to suffer at Will’s beck and call.

“Come, sit thee down upon this flowery bed.

While I thy amiable cheeks do coy,

And stick musk roses in thy sleek smooth head,

And kiss thy fair large ears, my gentle joy.”

Ben’s voice was high and clear, his cheeks still blushingly smooth. He’d scarce turned eighteen, according to Company gossip, when he abandoned his father’s Herefordshire farm to try the boards in London. Some spoke of a girl big with child, left behind, but Hugh didn’t believe it. He was willing to swear that Ben was an innocent, untouched by either sex. He should know, having corrupted and enjoyed a virtual army of virgins in his ten years on the stage.

Speaking of which, his cue was coming. He straightened his laurel wreath and came out from behind the column where he’d been lounging. John Marks, playing Puck, approached from the opposite side.

Her dotage now I do begin to pity...”

Hugh ventured closer to the form collapsed in simulated sleep at the foot of the column. He stroked Ben’s brow lovingly. The boy’s skin was deliciously soft. “Now, my Titania, wake you, my sweet queen.”

SHORTEST NIGHT is a beautiful mix of the sensual and historical...Sit back and enjoy this great story!

Share what you thought about Shortest Night and earn reward points.