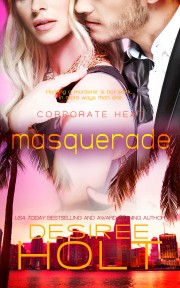 Book 3 in the Corporate Heat series

Hunting a murderer is hot work, in more ways than one.

Lindsey Califaro, second in command at Elite Marketing, is suspicious when her boss is killed in a one car accident. She’s had a funny feeling about things around the agency for a while and now her spidey senses are going haywire. Something is wrong and she’s determined to find out what.

John Martino, highly sought after forensic accountant, is sent by Arroyo to dig into Elite’s books and see if there is an answer there. He expects problems but what he doesn’t expect is to find a super smart hot female who pushes all his buttons and sends his sex drive into overload.

As the two dig into Elite’s books and Craig’s private life, they uncover a sordid trail of sex trafficking and drugs so extensive it shocks them. As they draw closer to the real head of the operation the heat between them rises in temperature and their feelings for each other explode.

As they work to blow open the criminal enterprise, their relationship intensifies and John knows he must do everything to protect Lindsey from a master criminal.

Reviewed by In D'Tale Magazine

This is one smoking hot suspense novel!… The suspense will keep readers on the edge of their seats.

Share what you thought about Masquerade PRINT and earn reward points.

Other books in the Corporate Heat seriesView Series Page