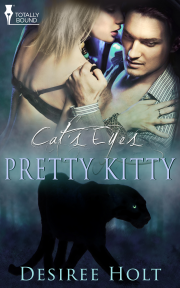 Book 1 in the Cat's Eyes series

Aisha McClellan has more trouble than she knows what to do with. A born cat-shifter, part human, part leopard, at the age of eighteen when she was just coming into her first heat, a rogue member of the pack attacked her and traumatised her, leaving her unable to shift.

Cast out by her pack, she makes a half-life for herself on the outskirts of both human and shifter societies, moving from city to city, seeking some kind of attachment. She's been in San Antonio for about six months now and has taken to hanging out at The Litter Box, a bar where cat shifters go to relax.

Several times she's allowed herself to go home with someone she's met there, but it's always a disaster, and after that she's careful to avoid them. Her best friend is the bartender, Max Rogan. One night when she's drinking too much he coaxes her story out of her. He is appalled at how she's had to live and what's happened to her.

The Litter Box was rocking. The band was ramped up to high energy tonight, every seat and square foot of standing space was taken, and the rumble of conversation vied with the band for volume. A familiar hangout for cat shifters, the place was usually full even during the week. Tonight being Friday, it was more jammed than usual. People working off the stress of the week. Letting loosely all their inhibitions.

Everyone seemed to be connecting with someone except her. Aisha McClellan took a sip of her vodka stinger and tried not to feel sorry for herself. She’d been in San Antonio for six months now and except that this job paid better than the others she’d had, nothing was much different. Same impersonal apartment. Same lack of friends. Same absence of social life. She wondered if she had a sign tattooed on her forehead that shouted, “Keep Away”.

She took another sip of her drink, letting the chilled liquid slide down her throat.

No one wanted damaged goods. It was as simple as that. And she was about as damaged as one could get. A full-blooded snow leopard shifter, she had never recovered from an assault when she was eighteen and just coming into her first shift. Since then she’d been stuck in a half-life, unable to fully transform into a leopard and unable to derive any pleasure at all from sex. She was sure the vibes she gave off were unpleasant no matter how hard she tried.

She drained her glass and thumped it on the bar.

“Fill ’er up,” she told the bartender.

Max Rogan looked up from where he was rinsing glasses.

Gods, she loved looking at him. A lean six feet of hot male, his black hair hung like silk to his shoulders and was usually tied back with a leather thong. Thick black lashes almost too pretty for a man framed eyes that could only be called electric blue. A strong jaw called attention to his very masculine face, with its brackets on either side of his sensual mouth and his high almost exotic cheekbones. Defined muscles moved smoothly beneath the black tee and the dark jeans he wore, hinting at great strength.

...a nice sense of anticipation and longing is created between the two main characters with obvious chemistry...I was very satisfied by the conclusion...I see nothing but arousing possibilities for...

4.5 out of 5!...an enjoyable short read...The fear, the hope and the desire were so believable...get your copy of Pretty Kitty, there's so much to enjoy inside.

Share what you thought about Pretty Kitty and earn reward points.

Other books in the Cat's Eyes seriesView Series Page