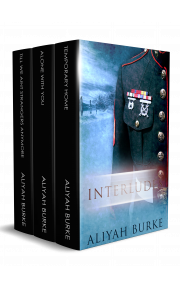 Sometimes past demons need to be faced before one can embrace what the future offers, and who better to slay them than a Marine?

Gunnery Sergeant Sam Hoch travels to the Pac Norwest upon receiving word his mentor and the closest thing to a father he's had, has taken a turn for the worse and is in the hospital. Once there he meets a woman who is unlike any he's ever met before. A former Marine herself, she opens up her home to him so he can be near his family.

Roxi Mammon isn't positive it's smart to allow Sam to stay with her, not with her immediate physical reaction to him. She's heard tales of him from her best friend, his sister, and now having met him she is even more impressed by the man the Corps has turned him into—a silent, strong type. Passion grows between them and soon she finds herself falling for the Recon Marine. And falling hard.

As things escalate between them, Sam has to accept his past doesn't control him if he plans on keeping Roxi in his future. Can he understand that this is the one woman who can give him something more? Will he silence the fear within him and tell Roxi she's the one for him? Will he realise that he deserves more than just a temporary home?

Till We Ain't Strangers Anymore

Sometimes a stranger isn’t a stranger at all, but the one you’ve needed all along.

Brent ‘Killer’ Agers is on leave. He needs to heal up and is tired of dealing with stuff around him so he takes a drive, ending up in Haversham, MT, deciding to rent a cabin and recover that way. Little does he know that the woman he couldn’t get out of his mind will be in his life once more.

Maya Brennan is content with her life running the local Bait & Tackle shop. Everything was going according to plan until the day he walked into her office looking to rent a cabin.

She’s never forgotten the man she had the fling with in Hawaii but by his reaction, he doesn’t recall her in the slightest. Once he figures it out, Brent is ready to find a way to prove they’re not strangers any longer. This Recon Marine may be facing his greatest battle yet.

"Get the hell out of here, you mangy, good-for-nothing kid! Don’t let me catch you around here again."

Samuel Hoch went flying through the air only to land in a partially frozen puddle. Seconds later a splash sprayed his face with icy pellets.

"You do and you’ll wish you were dead."

He already did. Sam scrambled towards his bag as the heavy door slammed behind him. The wintery wind swirled around, biting into his skin with vicious tenacity. Fighting back his tears, he tried to get up only to slip and fall again, this time wetting the rest of his thin and worn clothes.

Sam stared up in shock to find a tall black man standing there looking down at him. He took in the white hat with the black brim, the blue pants with a blood-red stripe on them—visible from beneath the dark coat—and the shiny shoes. He knew what he’d found. Or rather who had found him. A Marine.

The man extended his hand and it seemed that even the leather of his gloves was spotless.

"I’m fine," he snapped, embarrassed and a bit frustrated.

"No harm in accepting some help." The man’s tone never changed. His deep bass rumbled, reminding him of thunder.

Sam reached out slowly, half expecting the hand to jerk away or hit him in the face. Neither happened, and the man lifted him clear of the freezing water with ease. Sam’s teeth began to chatter as more of Minnesota’s winter wind slammed into him.

"You have anywhere to stay tonight, son?"

Mute, he shook his head as the large man began shrugging out of his coat. Sam was in awe of the uniform and never even moved when the heavy coat was placed on his too-thin shoulders. Immediately he warmed as the wind was blocked. The sleeves were too long and they fell to drag on the snowy ground. All he could think about was how nice it was to no longer be freezing.

"Come on, son. Let’s get you to some shelter for the night. Going to get right cold tonight."

He lifted his head and stared up at the imposing figure. If the wind or cold affected him, Sam couldn’t tell. The man seemed unbothered by it all. He still hesitated—he’d seen what happened when boys went off with adult men. Those images and screams gave him nightmares.

"I have your things, come along."

He walked beside the now-silent Marine. His smaller steps were weighed down by the heaviness of the wool coat. He didn’t mind the heat but he was exhausted and so hungry. At the end of the alley, the man paused and glanced down.

"Sa...Sam Hoch." The words were painful sliding through cracked lips.

That was it, all the man called Dean Richardson said as they walked along the snowy streets. It didn’t take too long before they were walking up the steps to a large stone church. They didn’t go in the front but headed around to the back. There Dean knocked.

Warmth and bright yellow light spilled out when the door was opened. An older man with silvered hair stood there.

"Thank you, Father. I brought someone who needs some help"—a pause—"at least for the night."

Kind blue eyes found him and soon Sam was welcomed inside. There were about fifteen other boys running around. They all halted in what they were doing and stared at him. He stepped closer to the tall Marine.

"We should have some dry clothes which will fit you. I’m Father Michaels, by the way."

"S...Sam." His teeth still chattered but he was not as cold as he’d been before.

Another gentle smile. "Come along, Sam. You’ll feel better dry and with some food in you."

He peered up at Dean who gave an encouraging nod. "Go on, son."

He went and when he returned, Dean was still waiting. His coat, with its muddy and snowy hem, rested beside him on a second chair. His hat sat next to him on the table. Sam couldn’t explain his relief at seeing him there. The man spoke to Father Michaels. The light gleamed off his shaved head, creating an even more imposing figure. Still, the brown eyes, which met his were soothing.

Dean approached, gestured him into a chair at the table then sat across from him. "You’re going to be okay, son." He reached out his hand, a card extended from his fingers.

Sam took it and read the printed words. Staff Sergeant, Dean Richardson, United States Marine Corps. He didn’t know what it all meant but he was glad to have it in his grip. There were also phone numbers on it.

"Work and home. You can call me any time, Sam."

He didn’t know what to say and so just blurted something out. "I’m sorry about your coat."

Father Michaels set a plate of food in front of him before disappearing again.

A wide, brilliant grin. "Not to worry. A little dirt never hurt a coat." He got to his feet. "You’re safe here, son. Father Michaels is a good man."

After stabbing some of the ham from his plate, he shoved it in his mouth. "Why did you—"

"Don’t talk with your mouth full." Dean’s reprimand was delivered in an authoritative yet calm voice.

He swallowed and tried again. "Why did you help me?"

"Everyone needs help at some point, Sam. Remember that." Dean walked off, slipping on his coat and holding his hat.

Sam watched the man speak with Father Michaels then open the door and step though, simultaneously placing his hat on his head. Then Dean Richardson was gone. And Sam again felt alone.

For the first night in over a month, Sam crawled into a bed, which wasn’t made of collapsed cardboard boxes or on a heating grate. His bag of personal belongings was beside him as he snuggled beneath the warm blankets. In his hand he held Dean’s card. Too exhausted to remain awake, and confident he was safe, at least for the moment, he succumbed to the sandman’s irresistible lure.

reviewer for Archaeolibrarian, a much longer review for these books appears elsehwere These books landed right in my queue when I needed them the most. I read a lot, A LOT, a lot and a huge chunk of th...

Share what you thought about Interludes Box Set and earn reward points.