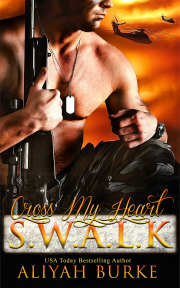 One night together can lead to forever…

Rash decisions had not really ever been her thing, until one night in a bar with her brothers had Cynzia Cassano irritated enough to kiss the next guy walking through the door. Little does she know that he is going change her life.

Lucas Hoch is out with his best friends when a woman that knocks his world on its axis kisses him. Unable to forget her, he follows and takes the night with her she offers. It will never be enough. She is gone when he wakes and he will scour the earth to find her again.

When their paths do cross once more, as much as he wants to keep her, she is a woman with her own strong mind and life to live. Will there be room in their lives for each other?

Reader advisory: This book contains characters from Casanova in Training and Temporary Home.

Share what you thought about Cross My Heart and earn reward points.