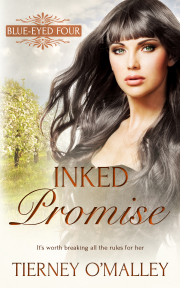 Book 3 in the Blue-Eyed Four series

In bed or out of bed, it’s worth breaking all the rules for her.

For many years, the pain of shattered dreams has haunted Gypsy Grey. Now, she hopes to spend a week at her friends’ house on Shaw Island to attend the yearly fair with her daughter, Nika. But her plan changes when she learns that her ex-lover, Nolan Keats, and his friends will be sharing the house with them. However, Gypsy begins to enjoy Nolan’s company, which again turns into fierce possessiveness and a fiery touch. When Nolan proposes that they not talk about the past or future and only live for the present, Gypsy also decides to hide the truth from him. He’s no longer single. Telling him about Nika doesn’t matter anymore. Once their temporary affair is over, she’s unsure if she’ll be able to survive living with another shattered dream.

Years of running from his hurtful past finally catches up to Nolan—unexpectedly. He’s supposed to celebrate his last remaining bachelor days with the Blue-Eyed Four, but upon seeing the beautiful, spirited woman he once promised to love eternally, he begins to burn for her again. This time hotter and deeper than the last. Worse, he realizes that he’s never really stopped loving her. Like fever flowing in his blood, he must possess her. She’s now a mother to a blue-eyed daughter he wishes belonged to him.

On beautiful Shaw Island, Nolan and Gypsy boldly ignore their present situation for a blazing, forbidden passion. More than anything, he wants her back in his life. But for that to happen it will hurt another.

“What in the world? Oh, no.” Gypsy’s car pulled sharply to the right. She fought the steering wheel to stay on the lane. “I have a flat?”

Crud. Of all the times, why now? She hated driving at night and it wasn’t safe to pull over on the shoulder. Damn it.

She’d never driven a car with a flat tire before. It felt weird. The car bounced. When she tried to go faster, she heard scary sounds, as if something was about to come off.

“Lord, just let me make it to the nearest gas station and I promise not to eat green apples with salt again.”

Gypsy let out a deep breath when she finally took the I-175 exit. Rain had started falling and visibility was limited. She should have been home sooner, but her group meeting for drama class had taken forever, and it was already dark when they left the library.

She sighed. Friends at school who lived outside the state envied her. They all loved the Emerald City where the trees were green and abundant. Not to mention the numerous hiking places. But at times like this, Seattle didn’t seem that wonderful, and she wished she and her dad still lived in Manila.

When she was a teenager, her dad had been transferred to work at the US Embassy in Manila for two years. The whole family had stayed there. It was the best thing that had happened to her. While in Manila, she never had to wear long sleeves or jackets, tropical fresh fruits were always available, the sun was high in the sky, even in the late afternoon, and the people were so hospitable. Amazing really. For a third-world country, overpopulated, and with signs of suffering everywhere, the Filipinos still found the time to wave and smile. Here in Washington State, the sun barely touched her skin. No wonder the doctor had told her she needed vitamin D. People were always so busy that they forgot to look to the skies at night and admire the stars, or at least stop for a minute to smell the air. She missed Manila. Maybe someday she’d be able to go back there. Right now, though, she needed to make it to Richmond Beach Road. There was a gas station and a repair shop there.

You’ll make it, car. Just hang in there.

After what seemed to be an endless drive downhill, Gypsy let out a sigh of relief when she spotted the shop. However, her heart took a quick dive when she realized someone was already lowering the accordion door.

Afraid that she was too late, she stepped on the accelerator, ignoring the weird way the car bounced, turned right onto the shop’s parking lot then stopped a yard away in front of the man, who flattened his back against the door.

She couldn’t read lips, but she was sure the man had said ‘What the fuck!’ Gypsy mouthed ‘Sorry.’

“Please, don’t get mad. Just fix my tire and I’ll be eternally grateful,” she mumbled. Damn. She’d almost killed him.

As soon as she turned off the engine, the man moved as if he was slowly peeling his back off the door.

Forcing a smile, she lowered her window. “Hello there. Are you, are you… God.” Damn. She’d never seen a sexy, grease-covered man before.

Eek. Even his name is beautiful. “Hi, Nolan. Are you available? To work on my…uhm…” She snapped her fingers fast trying to remember what it was she was wanted to say. “Car.” Whew. What a brain fart.

Nolan gave her a lopsided smile. He stood by the window then leaned down to look at her.

He shrugged. “Heard you coming from miles away and I can see it clearly right now.”

Gypsy nearly groaned when he smiled again. If he keeps doing that, I might just find myself in love with him tonight. Wait. She might be in love already because she couldn’t seem to stop staring. Not to mention her heart had started doing a weird erratic beat the moment he’d smiled at her.

Hard not to fall in love with this guy. His dark wavy hair fell almost to his shoulders, his bangs hung low, partly covering his gray eyes. Okay, she’d been a sucker for long, dark, longish-curling-at-the-ends type of hair, but that was just one of this delicious specimen’s many drool-inducing characteristics. He had a straight nose, an athletic build that could rival the men she’d seen on the framed pictures in American Outfitters dressing rooms, and flat abs that could be mistaken for a swimmer’s. Oh, yeah. That white shirt and faded, grease-stained, low-rise jeans showed off his well-defined body. To add yumminess to his ensemble, he wore old Converse shoes. He looked so scrumptious in her eyes. Oh, baby. She wanted to touch those arms and find out how soft his smiling lips were. Gypsy’s mouth watered.

“I said you could if you want.”

“I was talking about your tire and asked if you want me to change it.”

“Gypsy. Your name is Gypsy like a Roma chick who wears bracelets on her ankles, bangles, and can tell fortunes?”

“Yup. Except I’m not really dark-skinned and can’t speak Romani. It would be fantastic, though, if I could.”

“Yeah. Too bad you can’t tell your fortune also. Otherwise, you wouldn’t be driving with a flat tire.”

“Well, things happen for a reason,” she said cheerily. Oh, hell yeah. I’d drive a car with square tires if it meant meeting you.

“Nice to meet you, Gypsy.” He offered his hand, which Gypsy shook quite enthusiastically.

“No charge. I’ll even let you touch my arm and find out if my lips were rose petal soft.”

It had a fantastic hook of the main characters being star crossed lovers and wondering which choice to make …. something real or superficial perfection. The story was loaded with dramatic angst and i...

Share what you thought about Inked Promise PRINT and earn reward points.