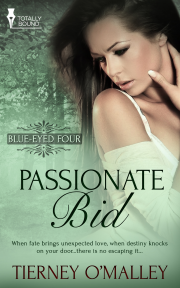 Book 1 in the Blue-Eyed Four series

Julian Ravenwood clenched his teeth so hard he thought they might crack from the pressure. But having cracked teeth was better than punching someone. He’d already humiliated his grandma and wouldn’t do it again in front of people eager to hear more gossip.

Son of a bitch. Standing inside this church was the last place he wanted to be—wearing a tuxedo, polished shoes and about to get hitched.

Damn wedding. In his opinion, however fucking insignificant it might be, marrying a very young woman was a high price to pay for one mistake he barely remembered committing. Too bad his soon-to-be father-in-law thought otherwise, a thought that his grandma shared.

How could she pick Saint Claire’s side? He couldn’t believe it. His own grandma, who knew him since birth, agreed that he acted foolishly and should face his responsibility like an honorable man.

I am a fucking honorable man. Never tried pot, never cheated on any of my girlfriends, never cut in line. But, according to Saint Claire, I am the son of Satan who took advantage of his daughter’s innocence. Innocent, my ass.

Julian had been drunk. Joanie sober. Wasn’t it easy to see who took advantage of whom? But no matter how hard he tried to explain that simple fact when the unthinkable happened, they didn’t believe him. What he received was a hard slap on the face. It was the first time he’d seen his grandma that angry.

How could they not see that Joanie was an accomplice and not a victim?

“Bro, you’re scaring me with your fucking scowl.”

Julian elbowed his friend, Nolan. “I bet you’d do more than scowl if you were the one getting married right now.”

“Please, mind your language. You’re inside the church.”

Nolan turned around to grin at Father Keeley. “Sorry, Father, we have sinned—again.”

Julian groaned and rolled his eyes as the pianist played the old universal wedding tune, Here Comes the Bride. It was a reminder that he’d fucked up his life. Big time. He looked to his left where the old lady in her bright pink sweater hunched low in front of the organ. Her body spoke of excitement. She was practically dancing. Well, at least someone appreciated the occasion because he, the stupid groom, definitely didn’t care.

Yup, I don’t give a damn about this wedding.

The handful of guests, including his two other friends, Trey and Henry, turned in their seats expecting the bride to appear at the door. A minute later, no bride appeared. Good. Maybe she and her father came to their senses and realized that this whole thing was a mistake and they both went home.

Perhaps to cue in Joanie to take the spot by the door where she should be, the organist pounded harder on the keys, repeating the music’s intro, as she looked up and craned her neck.

Damn song. Here Comes Death would be an apt title for it, because this wedding was exactly that—a funeral. A string of curses fell from his mouth. Damn, he’d never been this angry. He should feel ecstatic or at least nervous. After all, today was his wedding day, the beginning of a new chapter in his life. Today was anything but.

Standing by the altar with ornery Father Keeley breathing down his neck was the last place on earth he thought he would be right now. He should be getting ready for the trip with his buddies in Florida, to enjoy the beach, beautiful women in their skimpy bikinis, and cans of cold Coors beer, not sealing his doom.

“You still going to join us in Florida?” Nolan whispered.

“What about your bride?”

“What about her?” Julian flicked imaginary lint off his sleeve.

“What do you mean what about her? Tonight’s gonna be the night, man.”

“Shit, I’m not going to touch that girl with a ten-foot pole.”

“Dude, so cliché. So you’re just going to leave her?”

“Well, to start with, I’m going to Florida with you guys. What about you? Aren’t you supposed to spend time with Gypsy?”

“Yeah. She’s okay with me going to Florida, though.”

“You should just kidnap her, take her to Reno and marry her. What do you think her dad’ll do?”

“Gypsy will not agree to Reno. Her dad is hell bent on keeping her tucked in beside him all the time.”

“Man, that sucks. When are we going to meet her?”

“So she’s going to play Rapunzel while you play Romeo and climb her trellis forever?”

“We’ll make it work. I think you should to. Things happen for a reason. Give your marriage a chance. Don’t worry, we’re not going to replace your spot. Even married, you’ll remain one of the Blue-Eyed Four. It’s just you’re the first one to fall. I wonder who’s going to be next. Definitely not me. Not with Gypsy reluctant to leave her dad’s side.”

Julian met his friends’ gazes. Two pairs of intense blue eyes looked back at him. Blue-Eyed Four. It was what Remy, the brusque bartender at the Old Cabin Bar in downtown Seattle, yelled while pointing his finger at the four of them when the police asked who was involved in the fight. Since then the name stuck. Among the four of them, Nolan had a girlfriend, one whom Nolan swore owned his heart.

His friend was lucky to find a woman he considered the one. Unlike Julian, who had been saddled with a woman he only knew by name. Julian searched deep inside himself for any signs of excitement or giddiness, anything at all, but there was nothing. What he felt was the need to escape and hot-boiling anger for not being able to.

Goddamn it. He’d rather be anywhere but here.

Trey gave him a thumbs-up while Henry pretended to be licking an imaginary ice cream. They’d been trying to cheer him up. But so far, none of his friends’ ridiculous behavior had worked.

Stomach sick, he kept his eyes focused on the church’s stained-glass window just above the arched doorway. Through his peripheral view, a froth of white appeared. His heart sank low in his gut.

“Please don’t remind me, Nolan. This is a fucking nightmare.”

So the Saint Claires are still here. Fuckin’ A. He kept his gaze glued on the rainbow-colored cross and ignored the hushed whispers that seemed to get louder every minute.

Father Keeley cleared his throat. The sound grated on Julian’s nerves. The priest had been doing it all morning, as though Julian was a child being reminded to behave. Julian bet the father would have a real sore throat when the ceremony was over. This time though, he knew why the priest made an even louder ahem.

But he didn’t need Father Keeley’s reminder. He knew what he was supposed to do—look at Joanie Saint Claire, the part that he found hard to do. No, not that he didn’t want to see her. He’d seen her around, and didn’t find any problems with that. It was what she represented that he didn’t like at all—a bride.

Share what you thought about Passionate Bid PRINT and earn reward points.